Kicking off the Longines Hong Kong International Races for 2018 was the HK$18 million (US$2.3 million) Longines Hong Kong Vase (G1), a 2400 meter (about 1 1/2 mile) trip for older horses over the right-handed turf course at Sha Tin. Grand Prix de Saint-Cloud (G1) winner Waldgeist was sent off as the 3-1 favorite in the field of 14 off his 4th place finish in the Prix de l'Arc de Triomphe and a 5th place finish in the Breeders' Cup Turf (G1). In to challenge him included 9-2 second choicd Exultant, second in the Jockey Club Cup (G2) last out, and 19-4 third choice Pakistan Star, winner of both the Queen Elizabeth II Cup (G1) and Champions & Chater Cup (G1) but 8th in the Jockey Club Cup (G2).

Jockey Yasunari Iwata sent 20-1 Crocosmia to the lead first time past the grandstand and he sety easy fractions of 25.09, 48.79, 1:14.42, and 1:39.01 while pressed by Exultant and stalked by 82-1 Ruthven and 36-1 Eziyra. Turning for home, Crocosmia tired as Exultant inherited the lead through 1 1/4 miles in 2:03.35. 5-1 fourth choice Lys Gracieux, 11th early under Joao Moreira, unleashed a strong rally down the center of the course, collaring Exultant at the 1/16 pole but Exultant, confidently handled by Zac Purton, flought him off in the final strides to win by a neck for the win in 2:26.56. It ws another 2 3/4 lengths back to Eziyra third, while favorite Waldgeist checked in 5th. 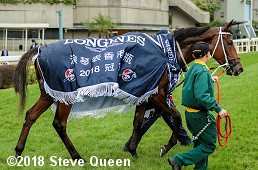 Left: Exultant in the winner's circle. Winning trainer Tony Cruz, celebrating his first Vase victory, giving him wins in all 4 Hong Kong International Races said, "I'm over the moon, we all are. This season he's stronger, he's more experienced, he knows his game better and he had a perfect run – Zac rode a perfect race. As he's getting older he's getting stronger and better. He's got that one speed and a lot of stamina, and he likes the fast track, too, so once he got that second position we were halfway there. This horse has no speed so you have to have him up there and being drawn wide (10) was actually good for him because nothing was going to block him. I told Zac he had to be up there – the Japanese horse (Crocosmia) led, we sat second, it was perfect."

Right: Exultant heads for the barn with his winner's blanket. Winning jockey Zac Purton said, "I thought at that point (1/16 pole) he (Joao Moreira) had the better of me, he had the momentum. But my bloke just seemed to be loafing along a little bit and as Joao came to me he actually rolled in and bumped my horse – that seemed to fire him back up and he found his second wind then. 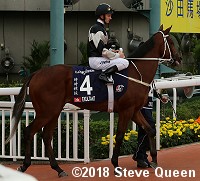 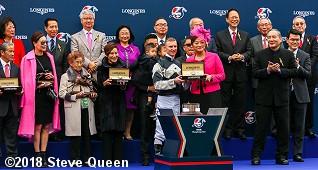 Left: Exultant heads for the post parade before the race. Purton added, "He's just an out and out stayer and we decided to put him up on the pace today against a quality field and just let him grind it out. He's the type of horse that if he's going to get into a fight in the last 200 metres over a distance like this, you'd like to be on his back."

Right: All the connections and officials pose with their Longines watches and trophies after the trophy presentation for the Hong Kong Vase. Cruz added, "The Sheema Classic in Dubai would be a possibility. I'll have to decide with the owner but we'll definitely make some entries overseas and consider those." 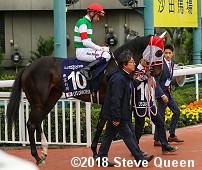 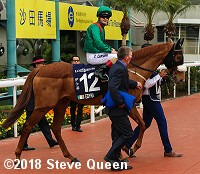 Left: Second place finisher Lys Gracieux heads out to the track from the paddock. Jockey Joao Moreira said, "There is no doubt that her performance was outstanding against a horse running at its home yard and knows the track inch by inch. There were a few little issues that people might not have seen because I got held up, horses bumped me at 600 metres and she was hanging in the straight. Those little things can affect a horse's performance and probably cost her the race. But overall I am extremely pleased with her performance. She is very talented and has proved that once again."

Right: Third place finisher Eziyra heads out to the track. Jockey Christophe Lemaire said, "She had a dream run through behind the winner and she has a lot of stamina. She just lacked an instant reaction, but she fought all the way to the line and at this level that is certainly her best performance. I know the Japanese filly (Lys Gracieux) and she is a very good horse. I was happy – she kept on galloping and no excuses."