The Cathay Pacific Hong Kong International Races are the last major stakes races on the international flat racing calendar, with four Group 1 events for older horses contested on the main turf course at Sha Tin. Kicking off the International Races on Sunday afternoon was the $12 million (HK) Hong Kong Sprint (G1) (about $1.54 million U.S.) at 1200 meters (about 6 furlongs). Local hero Sacred Kingdom was sent off as the 2-5 favorite in the field of 13 over the Australian mare and 7-2 second choice Miss Andretti. Last year's winner Absolute Champion was the 9-1 third choice on the board.

18-1 shot Royal Delight was sent to the lead soon after the start by jockey Shane Dye and he set fractions of 23.70 and 45.90 while being stalked by 103-1 longshot Why Be and second choice Miss Andretti. At the top of the stretch, Royal Delight stubbornly held onto the lead as Why Be and Miss Andretti faded from contention. Absolute Champion moved up to challenge for the lead in mid-stretch. However, favorite Sacred Kingdom, who raced well back early, found running room in the stretch and took over the lead inside the 1/8 pole and drew away to win by 2 1/4 lengths in a time of 1:08.40 over the good turf course. Absolute Champion took second away from pacesetter Royal Delight by 1/2 a length, while Miss Andretti showed no rally in the stretch, finishing 10th beaten 12 3/4 lengths. 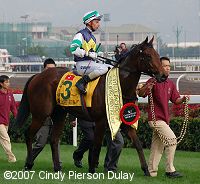 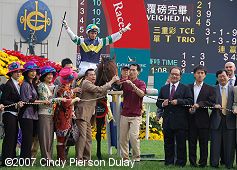 Right: Sacred Kingdom in the winner's circle. His jockey Gerald Mosse said, "He's a very, very good horse. Quite simply one of the best I have ever ridden. Coming off the final bend I had all the horse in the world but not the room. Once we found the gap, boom!" 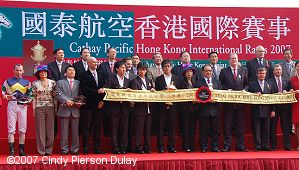 The trophy presentation for the Hong Kong Sprint. His trainer Ricky Yiu said, "He has proved he is one of the best sprinters in the world; maybe the best now. I was a little worried at the top of home. Gerald said the same, he was looking for a gap but when it came 300m out he took it and showed the turn of foot that we expected. It would be nice to take him overseas at some point but there are big races to go for in Hong Kong first." 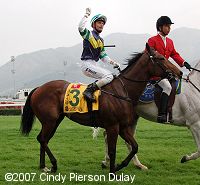 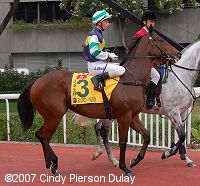 Right: Sacred Kingdom heads out to the track before the race. 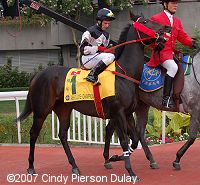 Second place finisher Absolute Champion heads out to the track before the race. His jockey Brett Prebble said, "He ran his heat out and he is a year older and was beaten by a superstar. I guess nobody expected Absolute Champion to win quite the way he did last year so to come second a year later on a different preparation and after surgery is still a great achievement." 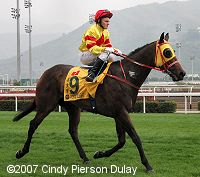 Third place finisher Royal Delight returns after the race. His jockey Shane Dye said, "He tried his heart out but the winner is just too good."