Hialeah opened on January 25, 1925, and was a showplace of racing, the winter version of Saratoga. All the rich and famous people of the day made Hialeah their playground in the winter and all the best horses raced there, from Seabiscuit to Seattle Slew. It was called by many the world's most beautiful racecourse with flamingos in the infield lake and an aviary behind the grandstand. The historic facility is on the National Register of Historic Places and was made eligible to become a National Historic Landmark in 1988.

The great old track went into a decline in the 1980's and 1990's due to competition for dates and horses with Calder and Gulfstream. Higher takeout rates set by current owner John Brunetti drove away bettors, and Hialeah had their last day of racing on May 22, 2001. Since then, only a maintenance skeleton crew and the flamingos have had the run of the grounds. Time, hurricanes, and neglect have taken their toll and much of the facility is falling apart now with no repairs being done. In November, the Hialeah city council voted unanimously to allow the demolition of the stable buildings, which had become dangerously decrepit due to neglect. Despite its protection by the National Register of Historic Places the entire facility might be torn down soon to make way for a new baseball stadium or condominiums. With the barns gone and the buildings in desperate need of repair, it is unlikely there will ever be racing held there again.

Click the smaller images to view a large sized one. 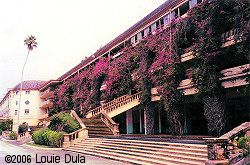 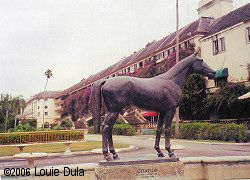 Two views of the back side of the grandstand where the bougainvillea vines have overgrown much of the building instead of being kept trimmed in neat arches. The lonely Citation statue in his empty reflecting pool looks over the sad scene. 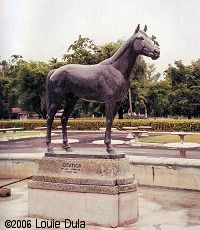 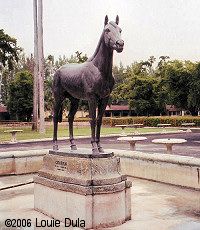 Here are two more views of the Citation statue. When I last saw it in 1997, the pond was full of water and flowering lily pads. He looks so lonely here with the deserted back yard area behind him and the empty walking ring. 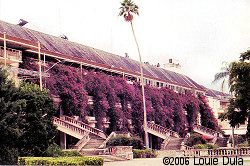 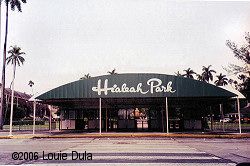 To the left is a view of the back of the stands from the other end while on the right is the deserted grandstand entrance. 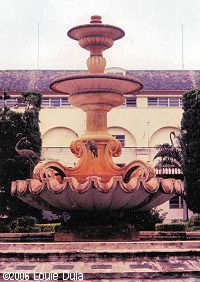 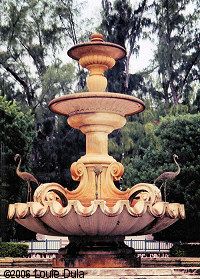 The Flamingo Fountain in the formal gardens was designed by Tomas Famigliette and was built in 1959. This fountain has plaques around the base with the names of all the Flamingo Stakes winners. This used to be as important a Kentucky Derby prep race as the Florida Derby and many horses used a victory in the Flamingo as a springboard to victory in Kentucky. Some of these include Lawrin in 1938, Citation in 1948, Needles in 1956, Tim Tam in 1958, Carry Back in 1961, Northern Dancer in 1964, Seattle Slew in 1977, and Spectacular Bid in 1979. The Bid was the last Flamingo winner to win the Derby. A full list of Flamingo winners with Kentucky Derby winners indicated is here. 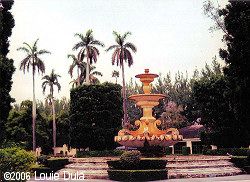 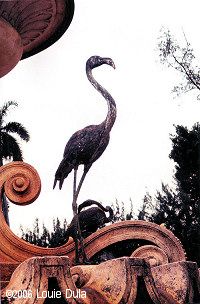 Another view of the fountain with some of the formal garden that surrounds it and detail for one of the flamingos. This seems to have been kept up a bit better since it is occasionally used for weddings. 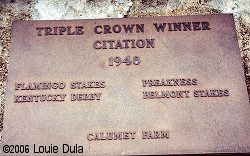 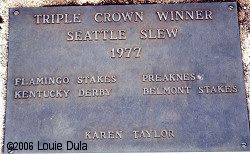 Plaques for two of the Flamingo Stakes winners who went on to win the Triple Crown: Citation and Seattle Slew.

A couple of the older winner's plaques for Northern Dancer in 1964 and Needles in 1956. 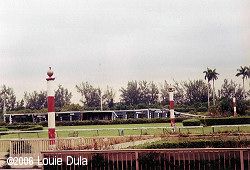 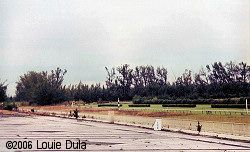 Here is where it really starts to get depressing. On the left is a view across the finish line with the overgrown track and collapsed toteboard in the background. One the right is the desolate apron and upper stretch with weeds growing everywhere. 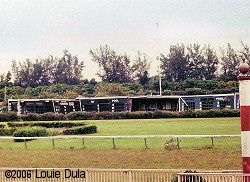 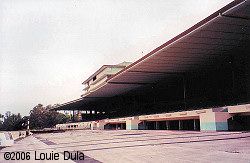 A closer look at the crumbling toteboard on the left and the empty grandstand on the right. 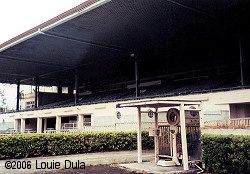 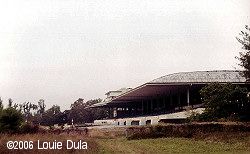 On the left is the abandoned weigh scale in front of the grandstand while on the right is a view of the entire grandstand. The roof is leaking and roof tiles are falling off after damage from hurricane Wilma.

A view of the flamingo lake in the infield. The flamingos are still there, although you can't see them very well here due to the distance. 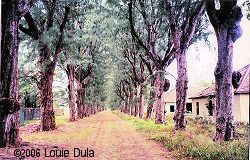 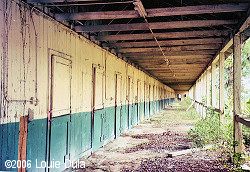 On the left is the famous tree-lined "Sunny" Jim Fitzsimmons horse path. Named for the famous Hall of Fame trainer who conditioned many champions there, it is one mile long and lined with Australian pines. On the right is a view of one of the delapidated shed rows in the barn area. These are all torn down now and probably the horse path will be razed as well. 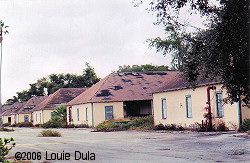 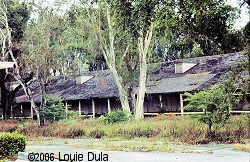 Two more views of the crumbling barns that were torn down in December. You can see the condition was horrendous due to years of neglect. It is sad to think Barn M where Woody Stephens trained his five consecutive Belmont Stakes winners is now gone.

Thanks to local resident Louie Dula for her photos of Hialeah.