The $500,000 Gold Cup at Santa Anita (G1) at Santa Anita Park features the best older horses on the west coast. Originally run as the Hollywood Gold Cup, after the Inglewood track closed its doors for good at the end of 2013 most of its stakes races were picked up by Santa Anita and Del Mar. It was unusually cool for late May in Arcadia, with cloudy skies and temperatures in the mid 60's, the main track rated fast and the turf course good. A field of 7 went to post for this historic 1 1/4 mile event, with Gift Box sent off as the 7-10 favorite off wins in the San Antonio (G2) and the Santa Anita Handicap (G1). In to challenge him included 4-1 second choice Vino Rosso, 4th in the Carter Handicap (G1) after winning the Stymie, and 11-2 third choice Lone Sailor, 2nd in the Oaklawn Handicap (G2) after finishing 3rd in the New Orleans Handicap (G2).

Jockey Rafael Bejarano sent 12-1 Blitzkrieg to the lead first time by and he set fractions of 22.97, 46.37, and 1:10.70 while pressed by Gift Box and stalked by 17-2 Core Beliefs and Vino Rosso. Turning for home, Blitzkrieg tired allowing Gift Box to inherit the front through a mile in 1:36.04. Jockey John Velazquez sent Vino Rosso 4 wide for room and he gained the lead midstretch through 9f in 1:49.35. Vino Rosso held off Gift Box the rest of the way to win by 3/4 length in 2:03.00. It was a long 5 1/4 lengths back to late-running Lone Sailor fourth. 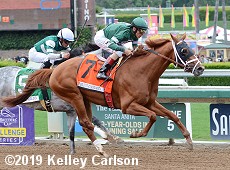 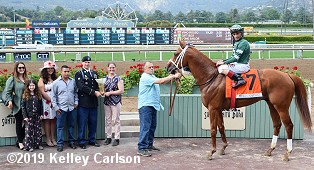 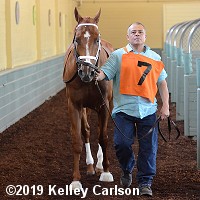 Left: Vino Rosso in the winner's circle. Amy Mullen, assistant to winning trainer Todd Pletcher said, "I didn't have to give John any instructions, just a leg up. John got here six hours ago and he had a conference call with the owners and Todd. I've been here a week with Vino Rosso and Mike McCarthy, we trained over the track to get ready for this race."

Right: Vino Rosso in the paddock. Winning jockey John Velazquez said, "We come from seven eighths, we knew we were going to be close. I knew the pace would be fast early and I just wanted to stay close. He broke very well and we settled in there. When it was time to go, we knew we had to engage Joel (Rosario) to play the game because he was the horse to beat.  And we got the job done. Vino Rosso seemed to have it all put together today." 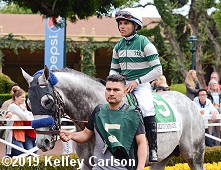 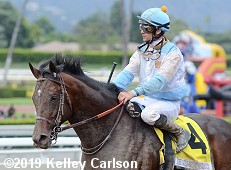 Left: Second place finisher and beaten favorite Gift Box in the paddock. Jockey Joel Rosario said, "He broke well out of there. In the beginning, they all got into position and I thought I was in a good spot. I guess he was just second best today. I used him a little in the beginning to get my spot but he settled and was very comfortable after that. Everything he did was just right, he just got a little tired in the end. I still think he's one of the best handicap horses in the country and he'll improve off of this. I had the trip I wanted, the other horse just ran a better race today."

Right: Third place finisher Lone Sailor returns after the race. Trainer Tom Amoss said, "He was a little farther back than I wanted, but I was happy with what I was seeing up front. I knew at the three eighths (pole) he wouldn't be able to catch the leaders." 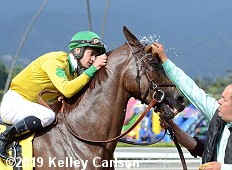 Left: Vasilika in the winner's circle. Winning trainer Jerry Hollendorfer said, "She has the turn of foot that most horses don't have, but anyway, she continues to do it. Today Prat didn't like where he was so he let her drift back a little so he could get out of where he was. He didn't like being in between horses, so luckily for us, once she saw daylight, she still had that big turn of foot. She's a very professional mare. She always likes being in our barn so I'm happy to have her that's for sure."

Right: Vasilika returns after the race. Winning jockey Flavien Prat said, "I knew we would be fairly close to the lead.  I took hold of her on the last turn and took her outside. She does everything I ask of her.  I'm just a lucky man. This filly knows how to win.  She knows what to do.  It is quite amazing to be around her." 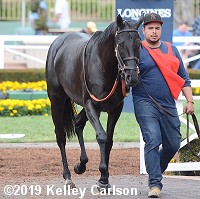 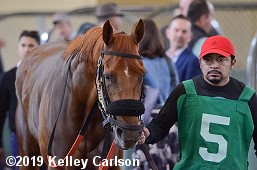 Left: Second place finisher Rymska in the paddock before the race. Jockey Irad Ortiz Jr. said, "There wasn't much pace, so they were bunched. We needed some separation to get out, so I had to wait and work my way through horses. We did the best we could."


Closing out the stakes action for the weekend, the $500,000 Shoemaker Mile Stakes (G1) featured a field of 9 older horses going 1 mile on the turf with the winner earning automatic entry into the Breeders' Cup Mile under the "Win and You're In" Challenge Series promotion. Delta Prince was sent off as the 9-5 favorite off his win in the Makers 46 Mile (G1) at Keeneland. In to challenge him included 2-1 second choice Sharp Samurai, unraced since winning the City of Hope Mile (G2) in October, and 7-2 third choice Catapult, 2nd in the Frank Kilroe Mile (G1). 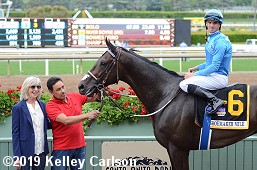 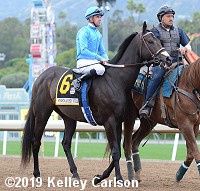 Left: Bolo in the winner's circle. Winning trainer Carla Gaines said, "The first race in April was a bit far for him and he hadn't run in basically two years, so it was sort of like let's get him out there and have him carve out some easy fractions and see if  he can keep going. He got a little tired in the end but today he didn't. When I saw the 46 and four for the half it had me a little worried because the track does have some cut in the ground. He really likes a very firm surface so that was my main concern. He lost a little weight after his last start, his first start back, so that was a concern."

Right: Bolo in the post parade. Winning jockey Florent Geroux said, "Last time the horse ran better than what it looked like, it was a bit far for him being 1 1/8 and he only got beat a length and a half so I had all the confidence in the world, I knew the horse was ready this time. I've seen him run.  I've followed his career.  He's a nice looking horse. Carla just gave me free reign. Whatever the horse does is fine. Right from the beginning he broke sharp to take the lead easily so I said why take him back, the horse took a few good breathers during the race and I knew from that point he was the horse to catch. He ran a big race and the pace was legit. I know a few of the horses had trouble behind me. I'll be back on him for the Breeders' Cup." 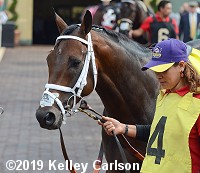 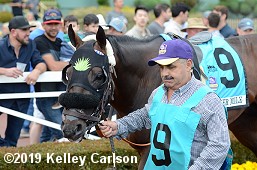 Left: Second place finisher River Boyne in the paddock before the race. Trainer Jeff Mullins said, "He's had some troubled trips this year.  With his style, he likes that outside swoop and run. Today, we had to wait in traffic." Jockey Flavien Prat added, "He ran a good race. It's good to have him back here and he ran well with some very good horses. The winner was just too much today." 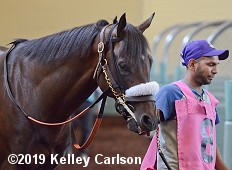 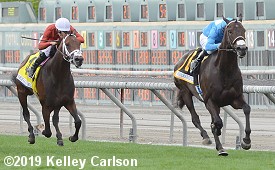 Left: Seventh place finisher and beaten favorite Delta Prince in the paddock before the race. The Jimmy Jerkens trainee has a record of 5 wins, 3 seconds, and 4 thirds in 14 starts, earning $1,174,170 for owner-breeder Stronach Stables (Adena Springs).

Right: Bolo leads down the stretch in the Shoemaker Mile.