The $500,000 Gold Cup at Santa Anita (G1) at Santa Anita Park features the best older horses on the west coast. Originally run as the Hollywood Gold Cup, after the Inglewood track closed its doors for good at the end of 2013 most of its stakes races were picked up by Santa Anita and Del Mar. After Little Scotty scratched out, a field of just 6 older horses went to post in this 1 1/4 mile main track feature under cloudy skies and temperatures in the high 60's before the 16,170 fans in attendance. City of Light was sent off as the 6-5 favorite off a three race win streak including the Malibu (G1), Triple Bend (G1), and Oaklawn Handicap (G2). In to challenge him included 2-1 second choice Accelerate, second in the Oaklawn Handicap after winning the San Pasqual (G2) and Santa Anita Handicap (G1), and 7-2 third choice Dr. Dorr, winner of the Santana Mile and the Californian (G2)

Jockey Joe Talamo sent Dr. Dorr to the lead exiting the chute and he set fractions of 23.28, 47.40, 1:11.70, and 1:36.43 while pressed by City of Light and stalked by Accelerate. Entering the lane, jockey Victor Espinoza moved Accelerate 4 wide for room and he took over the lead through 9f in 1:48.74. Kept to task by Espinoza, Accelerate drew off through the final furling to win by 4 1/4 lengths over Dr. Dorr in 2:01.38 over the fast main track. It was another 1 1/4 lengths back to favorite City of Light third. 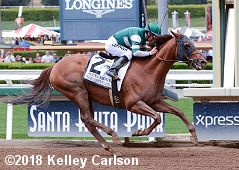 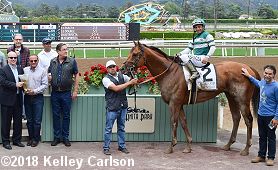 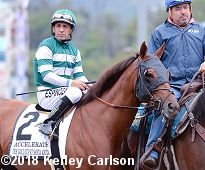 Left: Accelerate in the winner's circle. Winning trainer John Sadler said, "He broke good, I think Victor wanted to put him up in the race and then see what everybody else did, so he let him run out of there and when Joe (Talamo on Dr. Dorr) went to the front, he just sat in behind him and gave him a really beautiful ride. He had a lot of patience, a lot of confidence in the horse. He was riding confidently in the sense that he knew his horse could get the distance. We weren't scared of City of Light today at this distance. Accelerate has been such a good horse for us with a lot of great wins on his resume. He was straining really well for this race so I knew he'd run well. The Pacific Classic is the race we'll be looking for."

Right: Accelerate in the post parade. Winning jockey Victor Espinoza said, "I helped him out of the gate, which was my job today. If I let him break by himself, he can be a little bit slow out of the gate so I encouraged him. I shook his neck a little bit and I was able to get him in a good position. I was hoping to be on the inside at the 3/8 but I knew it wasn't going to happen. I knew (City of Light) was getting tired so I just kept following and had to be patient." 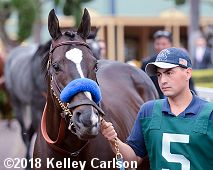 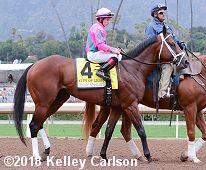 Left: Second place finisher Dr. Dorr in the paddock. Jockey Joe Talamo said, "It set up perfectly. He made and easy lead with his ears pricked and he kept fighting, as you saw. He really ran hard, a helluva race for him."

Right: Third place finisher and beaten favorite City of Light in the post parade. Jockey Drayden Van Dyke said, "Accelerate really ran strong at the end and we couldn't go with him. My horse relaxed real good. I definitely think he can get this distance. If I had the ideal trip, it would've been to be where Accelerate was."


The $300,000 Gamely Stakes (G1) featured a field of 7 older fillies and mares going 1 1/8 miles on the turf. Hawksmoor was sent off as the even-money choice off 3 straight second place finishes, in the First Lady (G1), Matriarch (G1), and Dahlia. In to challenge her included 4-1 second choice Madam Dancealot, winner of the Santa Ana (G2) but 7th in the Distaff Turf Mile (G2), and 9-2 third choice Beau Recall, winner of the Royal Heroine (G2).

Jockey Rafael Bejarano sent 11-1 Madame Stripes to the front first time by and she set fractions of 23.92, 47.24, and 1:11.45 while pressed by 23-1 Midnight Crossing and stalked by 13-2 fourth choice Mopotism. Madame Stripes continued to lead to the 1/8 pole through 1 mile in 1:36.21, but 14-1 Sophie P, 4th early under Kent Desormeaux, rallied 3 wide to win by a nose over Madame Dancealot in 1:48.53 over the firm going. It was just a beck back to pacesetter Madame Stripes third, while favorite Hawksmoor stumbled at the start and could not recover, checking in 5th beaten 4 1/2 lengths. 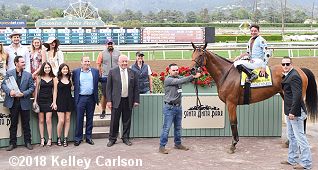 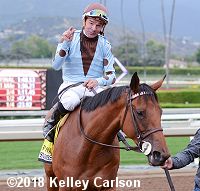 Left: Sophie P in the winner's circle. Winning jockey Kent Desormeaux said, "She was fluttering to me and I haven't had a horse do that with me in years. It's a great indication to me, verbally, like she was saying, 'I'm very happy here, let's continue to cruise here.' I stayed there until I needed her to help me make some room for a run. Once she had clear sailing she really took off. She had to fight to catch the leader and was very fortunate to beat the horse that she couldn't see. The photo finish describes it completely." Winning owner Deron Pearson added, "We wanted to run in an allowance race before we took a shot in a Grade 1, but the race didn't go so we decided to go ahead and take a shot here. When they hit the wire, I thought we won, but when I got down here and started watching the replays, you don't know where the wire is."

Right: Sophie P returns after the race. Winning trainer Jim Cassidy said, "I really wasn't sure if we got the bob, but if I had to bet on it I would have said no. If they put up dead heat I would not have been surprised. I was thinking Kent's a great rider as I watched the stretch. He put her in the right position and didn't let anybody get clear. He did everything he had to do. Kent told me that when he could hear her breathing steadily that he knew he had a lot of horse. The 1 1/8 mile in here, I thought, was going to be to her benefit and the fact that she's trained very forwardly since her last race." 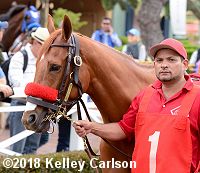 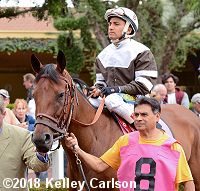 Left: Second place finisher Madam Dancealot in the paddock before the race. Jockey Corey Nakatani said, "I thought I won my first Grade 1 for these guys (Slam Dunk Racing partnership), so close. What a nice filly, she ran great." 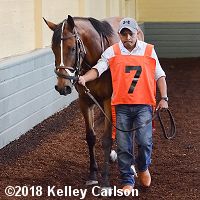 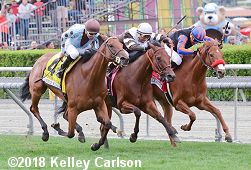 Left: Fifth place finisher and beaten favorite Hawksmoor in the paddock. Jockey Julien Leparoux said, "She stumbled really bad. She was standing fine maybe it's starting on the dirt, I don't know. After that, she was never comfortable. She was pulling too much and not relaxing at all. It's the kind of race that we need to erase and go to the next one."

Right: The battle down the stretch with eventual winner Sophie P on the outside.

Jockey Stewart Elliott sent 10-1 What a View to the lead coming off the downhill chute through easy fractions of 25.31, 50.62, 1:15.32, and 1:38.93 while pressed by Kenjisstorm and stalked by 10-1 Frank Conversation. Entering the stretch, Kenjisstorm moved up to take over the lead through 9f in 1:50.62, but Itsinthepost, 4th early under Julien Leparoux, rallied 3 wide to win going away by 1 1/4 lengths over Kenjisstorm in 2:02.10 over the firm going. It was another 2 1/4 lengths back to Frank Conversation third. 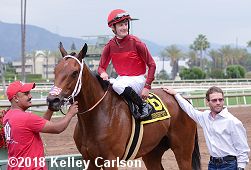 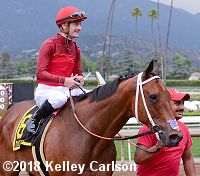 Left: Itsinthepost in the winner's circle. Winning owner Jed Cohen said, "It was a little unsettling not having Tyler (Baze, injured regular jockey) ride because he basically lives with this horse. I know Julien is a good rider but it's a change and who knows what will happen? Tyler talked with Julien before the race and told him the things not to do with him! He's just such a strong horse, he can't even pull him up. The same with the mornings when Tyler works him. He works him on the training track, keeps him away from the rail and he just always wants to go and tells us, 'I can't do anything about it, he just wants to go!' That's what he does."

Right: Itsinthepost after the race. Winning jockey Julien Leparoux said, "Tyler talked to me just before the race in the paddock. I heard I might ride him but I wasn't sure and found out for sure today. I wish Tyler a fast recovery and it's always bad to get hurt but especially before these big days. The setup looked great for us before the race. (Frank Conversation) was on the inside, we were on the speed. We tracked him and made a move on the outside. It was a pretty easy race and he won nicely. I thought we would have more pace but he was traveling very nicely for me and I just wanted to wait until that last part to finish." 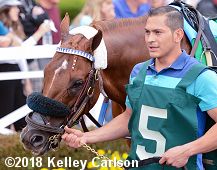 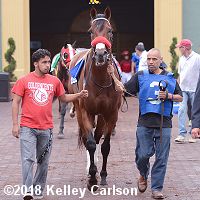 Left: Second place finisher Kenjisstorm in the paddock before the race. Jockey Flavien Prat said, "We had a perfect trip. I thought we could win turning for home. No excuses."