The $500,000 Gold Cup at Santa Anita (G1) at Santa Anita Park features the best older horses on the west coast and is a Breeders' Cup Challenge "Win and You're In" qualifier for the Classic. Formerly known as the Hollywood Gold Cup, after the Inglewood track closed its doors for good at the end of 2013 many of its stakes races were picked up by the other Southern California tracks. Both stakes races on Saturday were traditional Hollywood Park fixtures. A field of 8 older horses went to post in this 1 1/4 mile main track feature under sunny skies and temperatures in the high 80's before the 16,331 fans in attendance. Santa Anita Handicap (G1) winner Melatonin was sent off as the 9-5 favorite off his second place finish in the Oaklawn Handicap (G2). In to challenge him included 3-1 second choice Hoppertunity, last year's runner-up and third in the Dubai World Cup (G1) last out, and 11-2 third choice Second Summer, winner of the Californian (G2). Defending champion Hard Aces was all but dismissed as the 8-1 fifth choice.

Jockey Martin Garcia sent 14-1 Lieutenant Colonel to the lead first time by and he set fractions of 23.83, 47.70, and 1:11.48 while pressed by Melatonin and stalked by 24-1 longest shot Win the Space. Entering the lane, Melatonin gained a short lead from the tiring Lieutenant Colonel through 1 mile in 1:35.52. Win the Space moved up to challenge midstretch but Melatonin, under confident handling by Joe Talamo, opened up to win by 1 1/2 lengths in 1:59.79 over the fast main track. It was another 3/4 length back to Hard Aces third. 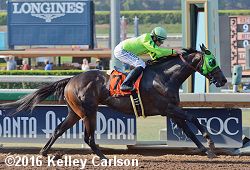 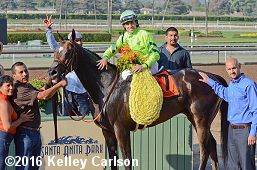 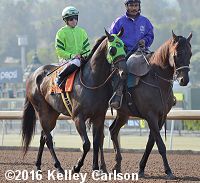 Left: Melatonin in the winner's circle. Winning trainer David Hofmans said, "I'm normally low key but today I was really nervous. It was his big test today. I thought there were some quality horses in here that he had to beat in order to think about going on (to bigger things). The difference is that today he validated himself. Any horse can beat any horse, on any given day. But to do it again, and maybe even again, then you start thinking. He's a very smart horse. You can see that Joe could do whatever he wanted with him. They're perfect together."

Right: Melatonin in the post parade. Winning jockey Joe Talamo said, What impressed me the most about him today was when Win the Space came to him at the eighth pole, he just battled back. He gives you everything he's got. He's not a horse that grabs the bit much, but he relaxed really well, two, three deep today. Especially going distances like this, you don't see horses coming from too far back. That helps him, the fact that he can inherit the lead whenever he wants to. If they went even quicker, it wouldn't have mattered. It's not like he has to be up on the pace, he could have been further back." 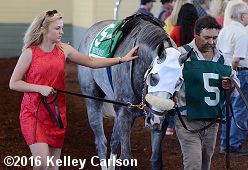 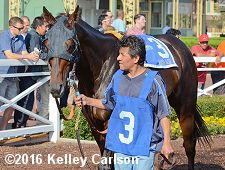 Left: Second place finisher Win the Space in the paddock before the race. Jockey Gary Stevens said, "It was a huge run. It was a fun race. He settled great for his first time going 1 1/4 and it was just a really professional race from him. Great job and well done by everybody in that barn."

Right: Third place finisher and last year's winner Hard Aces in the paddock. The 8-1 fourth choice raced 4th 2 lengths off the pace under Santiago Gonzalez, then passed the tiring pacesetter to get third beaten 2 1/4 lengths. The John Sadler trainee improved his record to 6 wins, 5 seconds, and 8 thirds in 32 starts, earning $939,645 for owner Hronis Racing. 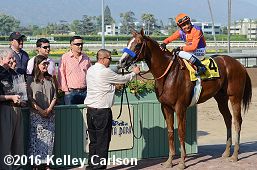 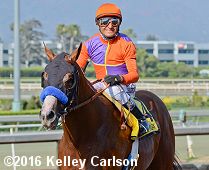 Left: Lord Nelson in the winner's circle. Winning trainer Bob Baffert said, "That was pretty game. I didn't think he was going to get there. He was trying so hard there at the end. It was pretty exciting to watch, more exciting to win. He's come back so strong this year; that break really helped him. I think this is his distance, sprinting might be too short for him." Owner B. Wayne Hughes added, "He's a big, good looking horse and we were looking for a stallion. He's exceptionally good looking. We'll keep him running, that's for sure."

Right: Lord Nelson returns after the race. Winning jockey Rafael Bejarano said, "I was really happy with my trip. I knew Subtle Indian was the only speed in the race so I wanted to make sure I broke good and got my horse into the race right away. I found my position and then just waited for Kobe's Back. When I saw him coming at the 3/8 I just went for it and tried to get the jump on him because he was really running." 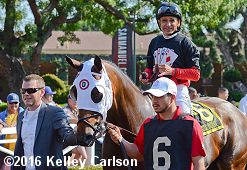 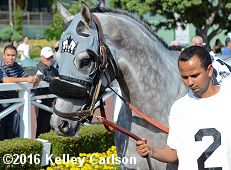 Left: Second place finisher Subtle Indian in the paddock before the race. Jockey Mike Smith said, "I tried to nurse him along without taking anything away from him that was coming easy for him. He was able to relax, I was really happy with the way he did. You have to give it to Lord Nelson. He ran a great race."

Right: Third place finisher and beaten favorite Kobe's Back in the paddock. Jockey Gary Stevens said, "I was on the extreme outside. I was wide around the turn and the pace was extremely slow for these kinds of horses. The track has been favoring speed all day long and my move was a bit premature and a bit wide." 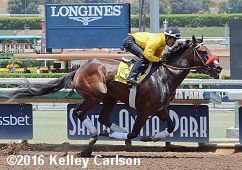 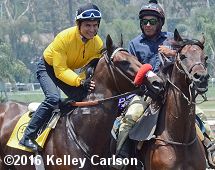 Breeders' Cup Juvenile (G1) and Kentucky Derby (G1) winner Nyquist worked out 45 minutes before the first race on Saturday. With regular rider Mario Gutierrez in the irons, he went 5 furlongs in 1:02.07, through fractions of 26.08 and 49.20, and then galloped out 3/4 in 1:15.85. He is expected to ship east to contest either the Haskell at Monmouth or Jim Dandy at Saratoga and then the Travers Stakes.

Trainer Doug O'Neill said, "He went the last eighth in 11 and change. You put him in company and he'll go a faster time, but we were just looking for a good leg stretch. I'm excited. I think he's back. In an ideal world, the San Diego would be 3-year-olds only, and I'd weigh 180 (pounds) and be marathon ready. The goal is the Breeders' Cup Classic and we'll work backward (from there)."