The $1 million Haskell Invitational Stakes (G1) is the highlight race of the Monmouth Park meeting, featuring some of the top 3-year-olds going 1 1/8 miles over the main track in Oceanport, New Jersey, also looking for automatic entry into the Breeders' Cup Classic (G1) under the "Win and You're In" promotion. Rains throughout the day downgraded the track to sloppy and the turf to yielding, but the rains held off during the stakes races, with temperatures in the high 70's for the 30,587 fans in attendance. As expected, Breeders' Cup Juvenile (G1), Florida Derby (G1), and Kentucky Derby (G1) winner Nyquist was sent off as the even money favorite in the field of 6 off his 3rd place finish in the Preakness (G1). In to challenge him included 5-2 second choice Exaggerator, winner of the Santa Anita Derby (G1) and Preakness but 11th in the Belmont (G1), and 3-1 third choice Gun Runner, winner of the Louisiana Derby (G2) and Matt Winn Stakes (G3).

Nyquist was quickest away under Mario Gutierrez through an opening quarter of 22.78 before 5-1 fourth choice American Freedom poked his head in front to lead through a half in 46.62 and 3/4 in 1:11.00, challenged the whole way by Nyquist with 32-1 Awesome Slew stalking the lead pair in third. Entering the stretch American Freedom continued to lead through 1 mile in 1:35.96, but Exaggerator, last for the first 5/8 mile, came out 4 wide to pass tiring runners, drifting in front of American Freedom at the 1/16 pole before drawing away to win by 1 1/2 lengths in 1:48.70. It was 2 lengths back to 31-1 Sunny Ridge third, and a neck more to favorite Nyquist fourth. Jockey Rafael Bejarano aboard American Freedom claimed foul against Kent Desormeaux aboard Exaggerator for interference but the result stood. 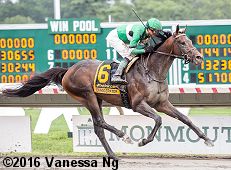 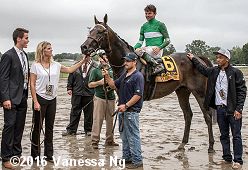 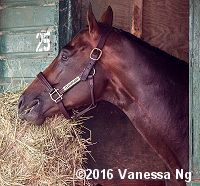 Left: Exaggerator in the winner's circle. Julie Clark, assistant to trainer Keith Desormeaux said, "We had a lot of confidence in the horse on this track. Obviously he loves the off going and that's great and it worked in our favor. I talked to Keith after the race and he said that it set up as he hoped and Kent brought him home. Immediately after the Belmont he was as slow to recover as I've seen him get. In the test barn he was gassed. But in a week, he bounced back and was 100%. He was on his toes and ready for a challenge. He'll head back up to Saratoga and train up there. We'll point for the Travers." Desormeaux added by phone, "I will absolutely consider the Travers at Saratoga for him next."

Right: Exaggerator back at the barn. 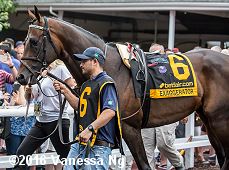 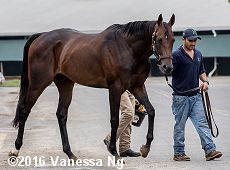 Left: Exaggerator in the paddock before the race. Winning jockey Kent Desormeaux said, "This race set up early like the Preakness. It came down to what was the best part of the track. Exaggerator showed an exemplary turn of foot. He just took off when I threw the 'helicopter' at him. The major difference today (was the pace). I take full blame for the Belmont. We probably should have been 10 (lengths) in front, just galloping." 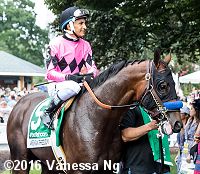 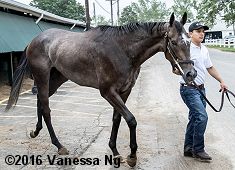 Left: Second place finisher American Freedom in the walking ring. Jockey Rafael Bejarano said, "When he came around me, he crossed me a couple times. I had to change my course in the stretch and then let him run again. I'm completely disappointed. We are hoping everyone had a clean race, in such a prestigious race, and he definitely crossed my lane and I had to change my course." Trainer Bob Baffert added, "He was stuck outside (in post 5) and I told Rafael to ride his race. I'm proud of the fact American Freedom can run those big horses. He's doing well and moving forward. I think I'm leaning toward the Travers with him right now. I like that race, but I'll feel more comfortable bringing him home first. I really like what I saw today."

Right: Third place finisher Sunny Ridge at the test barn. The 31-1 longshot raced in 5th early 4 lengths off the pace under Nik Juarez then passed tired horses to get third beaten 3 1/2 lengths. The Jason Servis-trained New Jersey bred improved his record to 3 wins, 2 seconds, and 1 third in 8 starts, earning $659,752 for owner-breeder Dennis Drazin. 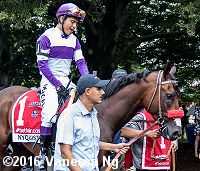 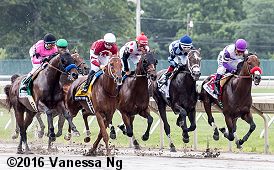 Right: First time by in the Haskell Invitational with favorite Nyquist leading. Jockey Mario Gutierrez said, "The trip was great. The horse was just a little off today. Any other day, he should be able to attack the pace, (American Freedom) kept going and I didn't. The race was great, perfect, but we were a little off today." Trainer Doug O'Neill added, "We will regroup, see how he comes out of it and go from there. I thought Mario rode him perfectly. That's how he had to ride, with confidence."