The Canadian International was one of three graded stakes run on the Woodbine turf on Sunday. Overnight and morning rain downgraded the course to an officially announced going of "soft" (however the GoingStick reading taken in the morning was given as 8.4 which is actually in the "good" range). It was also unusually warm for mid October in Toronto, with temperatures in the mid 70's through most of the card but after a band of heavy rain passed through before the Nearctic, the temperature quickly dropped down to 65, with mostly cloudy skies, and stiff winds of about 30 MPH gusting to 41. Due to a potentially unsafe infield winner's circle (the grass was waterlogged and the loudly flapping flags behind the stage could spook horses), winner presentations for the Ontario Derby, E.P. Taylor, and Canadian International were held on track in front of the stands instead.

The distaff counterpart to the International is the $500,000 E.P. Taylor Stakes (G1) for older fillies and mares going 1 1/4 miles on the turf. Last year's 7th place finisher Nezwaah was sent off as the 5-2 favorite in the field of 7 off a 4th place finish in the Yorkshire Oaks (G1) at York after winning the Pretty Polly (G1) at the Curragh. In to challenge her included 11-4 second choice Quidura, winner of the Canadian Stakes (G2), the main local prep for this event, and 5-1 third choice Fourstar Crook, winner of the John Hettinger Stakes at Saratoga.

Jockey Julien Leparoux sent 8-1 Rainha da Bateria to the lead soon after the start and she set fractions of 26.72, 52.20, and 1:17.20 while pressed by 11-2 fourth choice Kitten's Roar and stalked by Quidura. At the top of the stretch, Kitten's Roar poked her head in front through 1 mile in 1:41.93. Blond Me, 6th early under Oisin Murphy, came out 3 wide into the lane to collar Kitten's Roar at the 1/8 pole. Blond Me outfinished Kitten's Roar in the drive to win by 1 length in 2:08.08. It was another 1 1/2 lengths back to Fourstar Crook third, while favorite Nezwaah was 5th. 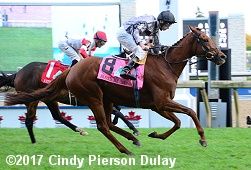 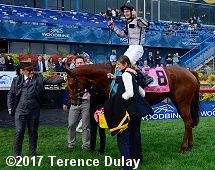 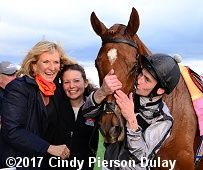 Right: Blond Me gets a kiss from jockey Oisin Murphy after the race. 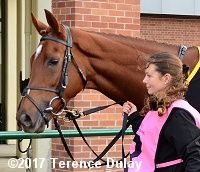 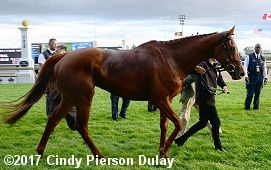 Left: Blond Me heads to the indoor paddock before the race.

Right: Blond Me heads back to the barn after the race. Anna Lisa Balding, wife and assistant to winning trainer Andrew Balding, said, "We walked the track this morning. I think, as everyone knows, soft ground in Canada is very different from soft ground in the U.K., so we were very happy that she acted on it today." 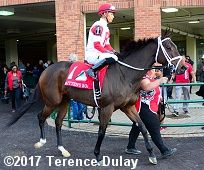 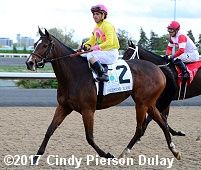 Left: Second place finisher Kitten's Roar heads out to the track before the race. Jockey Jose Ortiz said, "She broke good. We went to the backside and she was second. We were going pretty slow, so I was in great position and when I asked her to go at the quarter pole she gave me everything she had. Kudos to the winner. She's a great horse."

Right: Third place finisher Fourstar Crook returns after the race. Jockey Javier Castellano said, "She gave me a good finish, but it was soft ground and she kind of struggled a little bit. She finally switched leads, but it was at the sixteenth and it was too late." 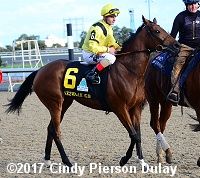 Fifth place finisher and beaten favorite Nezwaahin the post parade. The Roger Varian trainee has a record of 5 wins, 1 second, and 1 third in 11 starts, earning $299,387 for owners Sheikh Ahmed Al Maktoum and Godolphin.


Kicking off the stakes quartet on Sunday was the $250,000 Nearctic Stakes (G2) featuring top older horses sprinting 6 furlongs on the turf. White Flag was sent off as the 9-5 favorite in the field of 8 off his win in the Allied Forces Stakes at Belmont. In to challenge him included 5-2 second choice Cotai Glory, 2nd in the Dubai Airport World Trophy (G3) at Newbury, and 11-4 third choice Dowse's Beach, 2nd in the Play the King (G2) at Woodbine but 4th in the Lucky Coin at Saratoga last out.

Jockey Patrick Husbands sent 9-1 Conquest Tsunami to the front through fractions of 22.88 and 45.92 while pressed by Dowse's Beach and stalked by 21-1 Yorkton. Turning for home, 40-1 longest shot Field of Courage, 6th early under Luis Contreras, came out 3 wide for room and took over at the 3/16 pole through 5f in 58.29. Cotai Glory rallied from 4th but Field of Courage, despite Contreras losing his whip at the 1/16 pole, easily cruised to a 1 3/4 length win in 1:12.07. It was another 1 1/4 length back to late-running favorite White Flag third. 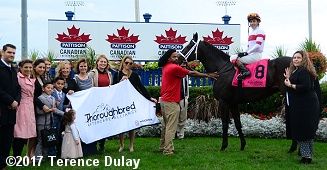 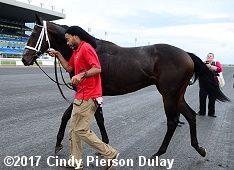 Left: Field Of Courage in the winner's circle. Kathryn Sullivan, assistant to winning trainer Mark Casse said, "He was awesome. Luis gave him a great ride for sure. He was doing very well, but it was a very big step up in company for him and maybe the conditions today worked out well for him because he certainly looked pretty happy out there."

Right: Field Of Courage heads back to the barn after the race. Winning jockey Luis Contreras said, "I just broke and I let my horse be really close. I don't want to be too far back on this kind of track. So, everything worked out very well for us and I'm very happy. He opened up really nice and he just kept it going until the wire." 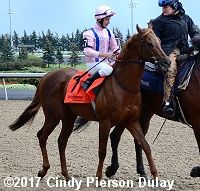 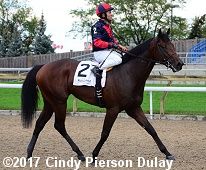 Left: Second place finisher Cotal Glory in the post parade. Jockey Oisin Murphy said, "Delighted with the run. I was able to sit in behind the leaders, one off the rail from (Post) 7. The ground is very testing and we rode a great race. Lovely prize money and glad to be a part of it." 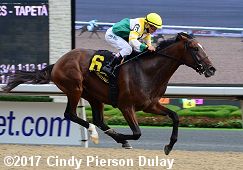 The $150,000 Ontario Derby (G3) featured a field of nine 3-year-olds going 1 1/8 miles on the Tapeta main track. Woodbine Oaks and Queen's Plate winning filly Holy Helena was sent off as the even-money favorite off her disappointing 8th place finish in the Alabama (G1) at Saratoga. In to challenge her included 3-1 second choice and fellow filly Grizzel, 5th in the Belmont Oaks Invitational (G1) and 4th in the Canadian Stakes (G2), and 7-1 third choice Senior Investment, 10th in the Belmont Derby Invitational (G1) after finishing 3rd in the Preakness (G1) and 5th in the Belmont (G1). Prince of Wales Stakes winner Cool Catomine was dismissed as a 23-1 outsider. 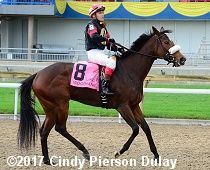 Left: Tiz A Slam in the makeshift winner's circle on the track. Winning jockey Eurico da Silva said, "I have been working a long time with this horse and I have a lot of faith in this horse. It was not that easy because when he broke there, he was very, very sharp and it took a long time for me to relax him," said Da Silva, who earned his third Ontario Derby win. "Finally I got him relaxed, but at the 1/4 pole, I wanted to wait a little more because it's very, very hard to run against the wind, but he took off and I said, ‘You know, boy, you are the boss and let's do it!'" Trainer Roger Attfield added, "It is actually [a very satisfying win] because I really thought that I could probably win the Plate and we got beat and then we went to the Prince of Wales and he really doesn't like the dirt and that turned into a bit of a disaster for us."

Right: Second place finisher and beaten favorite Holy Helena returns after the race. Jockey Luis Contreras said, "She was good, but on the first turn (37-1 shot Colonel Samsen) gave me a bit of trouble. If that doesn't happen, I would have been a little closer to the winner, but that's racing. The wind is a little steadying coming from off the pace. At the end, you can feel it riding against the wind. If nothing had happened on the first turn, we'd have been right up there with Eurico and maybe it would be a different story."