Friday was Opening Day of Santa Anita's fall meeting, with the feature race the $100,000 Eddie D Stakes (G3) for older horses sprinting about 6 1/2 furlongs on the downhill turf course, named in honor of Hall of Fame jockey Eddie Delahoussaye. Conditions were typical for late September in Southern California, with sunny skies and temperatures in the high 80's. Last year's Breeders' Cup Turf Sprint (G1) winner Stormy Liberal was sent off as the 2-1 favorite in the field of 9 off a win in the Green Flash Handicap at Del Mar. In to challenge him included 5-2 second choice Conquest Tsunami, 12th in the Wickerr Stakes after finishing 2nd in the Jaipur (G2), and 13-2 third choice Touching Rainbows, 3rd in both the Bing Crosby (G1) and the Green Flash Handicap.

Jockey Flavien Prat sent Conquest Tsunami to the lead immediately and he set blistering fractions of 21.58 and 42.79 downhill over the very firm going while pressed by Stormy Liberal and stalked by 14-1 Law Abidin Citizen. In the lane, Conquest Tsunami continued to lead through a blistering 3/4 time of 1:04.87 but Stormy Liberal, confidently handled by Drayden Van Dyke, rallied in the final 1/16 to win by a head in 1:10.93, just 0.20 seconds off the course record. It was another 3/4 length back to 15-2 fourth choice Caribou Club third. 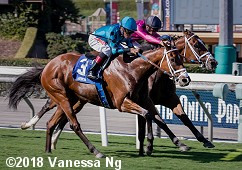 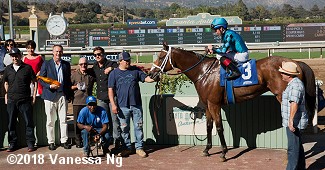 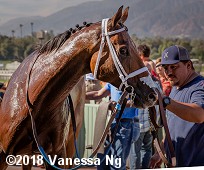 Left: Stormy Liberal in the winner's circle. Winning trainer Peter Miller, who trains the first two finishers, said, "Both horses ran great," said Miller. "When they crossed the dirt, I thought Flavien might be gone. But 'Stormy,' he's got so much heart. He just shows up." Hall of Fame jockey Eddie Delahoussaye presented the trophy for the race named in his honor.

Right: Stormy Liberal heads back to the barn after the race. 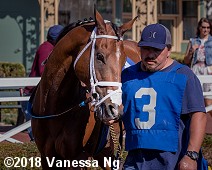 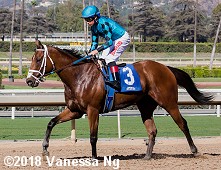 Left: Stormy Liberal in the paddock before the race.

Right: Stormy Liberal returns after the race. Winning jockey Drayden Van Dyke said, "He knows where the wire is, for sure, but think he could've won by three. I thought I'd be a little farther back, but he broke like a rocket, so I was up close. I hadt hat horse measured." 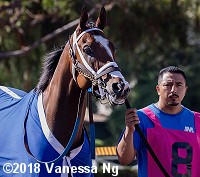 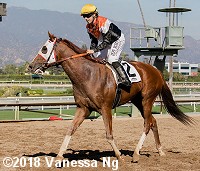 Right: Third place finisher Caribou Club returns after the race. The 15-2 fourth choice raced in 8th 8 lengths off the early pace under Joe Talamo then rallied to get third beatem just 3/4 length. The Tom Proctor trainee improved his record to 5 wins, 2 seconds, and 4 thirds in 15 starts, earning $324,744 for owner-breeder Glen Hill Farm.