The $5 million Longines Dubai Sheema Classic (G1) is the last of four scheduled turf races held on Dubai World Cup night. A field of 9 older horses went 2410 meters (about 1 1/2 miles), one complete circuit of the expansive turf oval at Meydan Racecourse in Dubai. Chrono Genesis was sent off as the 3-2 favorite off her win in the Arima Kinen Grand Prix (G1) at Nakayama. In to challenge her included 8-5 second choice Mogul, winner of the Hong Kong Vase (G1) at Sha Tin, and 6-1 third choice Mishriff, winner of the Saudi Cup in Riyadh last out. 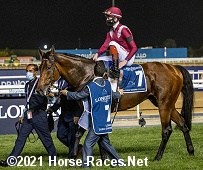 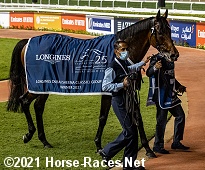 Left: Mishriff heads to the winner's enclosure. Thady Gosden, assistant to winning trainer and father John said, "We thought before the race that if he was too 'on it' the whole way around, it wouldn't be good to send him up there to get position and that would be for the worst. So David just dropped him in there, where he's relaxed, and David just switched him off beautifully. He made his move when he had to around the bend and (David) gave him such a brilliant ride to get him to the line. He's such a tough horse and he's shown his versatility. He's a brilliant horse and obviously really talented. Hats off to everyone at home. They do all the hard work and take care of these horses every day doing such a fantastic job." 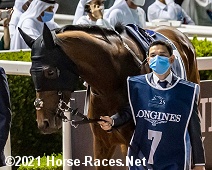 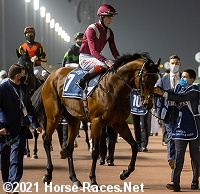 Left: Mishriff in the walking ring before the race. Winning jockey David Egan said, "This horse has brought me to the next level by winning the Saudi Cup and this is just the icing on the cake. After winning the 1 1/2 mile around here hopefully he will have an exciting summer campaign around Europe. He's a champion. It was a strong battle inside the final two furlongs. I was just glad I was able to do my job and get him to settle and we know he's got an immense turn of foot. He showed that in Riyadh. I thought he had to dig deep today in the final furlong. I thought he was going to curl up on me, but it just shows how good he is. Over 12 (furlongs), if he's ridden with restraint and put in a rhythm, he could be deadly in Europe this year."

Right: Mishriff heads out to the track before the race. 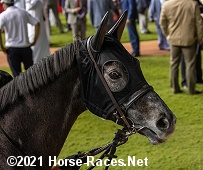 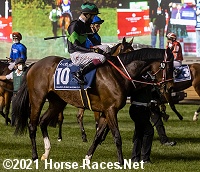 Left: Second place finisher Chrono Genesis in the walking ring. Jockey Yuichi Kitamura said, "She had a moderate start, I focussed on keeping her rhythm and tried to take a spot where she liked. When they picked up at the third bend, she could keep up with them but her reaction was not quite quick enough, she could not show her signature closing speed in the stretch."

Right: Third place finisher Loves Only You behind the starting gate. Jockey Oisin Murphy said, "She had a good run. She relaxed and travelled in to the race. I thought we might win at the bottom of the straight. I was able to cut inside and save ground. She's tried very hard and run a great race. The winner is a super horse." Trainer Yoshito Yahagi added, "She ran out of her stamina for the last 100m. She ran her race and gave a good run. She needed more pace. She will go to Hong Kong for the Queen Elizabeth II Cup for the next run."

The horses break from the gate for the Sheema Classic.

The $750,000 Al Tayer Motors Dubai Gold Cup (G2) is the longest race on World Cup night, contested at 3200 meters (about 2 miles) on the turf. Secret Advisor was sent off as the 3-5 favorite in the field of 11 off his third place finish in the Red Sea Turf Handicap in Riyadh. In to challenge him included 5-1 second choice Spanish Mission, second in the Red Sea Turf Handicap, and 6-1 third choice Subjectivist, unraced since winning the Prix Royal Oak (G1) at Longchamp. 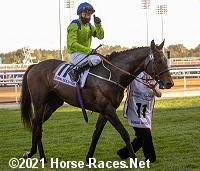 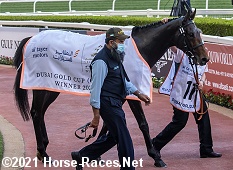 Left: Subjectivist heads to the winner's enclosure. Winning trainer Mark Johnston said, "We've had Carnival winners but this is the first success on World Cup night for 22 years. But frankly, we hadn't been bringing the right horses. We came here today thinking surely he was the one to beat. He was a Group 1 winner on his last outing, he didn't have to improve – he just had to run up to his best. People doubted him on the ground but he'd just never run on anything this fast. When I walked the course I didn't think I'd seen a turf track in the world in a better condition than this. All the ducks were in a row and there was no reason he shouldn't run up to his best, which he has done."

Right: Subjectivist with his new winner's blanket. Winning jockey Joe Fanning said, "He's a good horse and there was a bit of juice in that ground, which suited him," said the jockey."He settled well and I was always going so easy before the turn in. He stays very well. I rode him out here yesterday and thought the ground was good. I think he'll go on any surface. He's a good horse and has loads of ability and I think he's a better horse this year." 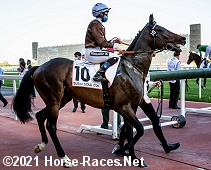 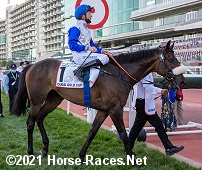 Left: Second place finisher Walderbe heads out to the track. Jockey Mickaelle Michel said, "Very nice. The horse was in very, very good shape, he wanted to run. Turning for home he wanted to go because he had a lot of energy. My horse is a very good fighter. He ran very well, I'm very proud of him. It's a very good experience. Performing on the big day, in the big event, I am very happy."

Right: Third place finisher Away He Goes returns afte the race. Jose Santos, assistant to trainer Ismail Mohammed said, "We expected a very good run from him today. He was a bit asleep last time because he had two races too soon, but always we believed in his ability. We predicted to run over 1 1/2 mile but obviously we couldn't get in. Today it was his first time running over 2 miles and we are delighted with the way he ran. The jockey was very positive and said to keep him like that and bring him back next season here. He's a really good contestant. This is his first time running on this track. He doesn't have much experience and he's assimilated really well and we are really happy.” 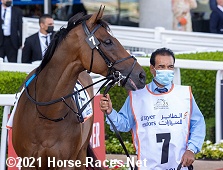