There are two sprints held on Dubai World Cup night, one on the dirt and one on the turf, both at the standard 6 furlong distance. The $1.5 million Gulf News Dubai Golden Shaheen (G1) is the feature sprint event on the card, contested at 1200 meters (about 6 furlongs) around one turn of the main track. Yaupon was sent off as the 9-5 favorite in the field of 13, unraced since 8th in the Breeders' Cup Sprint (G1). In to challenge him included 5-1 second choice Wildman Jack, winner of the Palos Verdes (G3) at Santa Anita, and 6-1 third choice Good Effort, a close second in the Maham Al Shimaal (G3), the main local prep for this race.

Jockey Antonio Fresu sent 50-1 longest shot Zenden to the lead out of the chute and he set fractions of 23.82 and 45.38 while pressed by Justin and stalked by Wildman Jack. Turning for home Zenden continued to lead through 5f in 56.81. Kept to task by Fresu, Zenden drew off late to win by 3 1/4 lengths over late-running Red Le Zele in a new track record time of 1:09.01. It was another 2 3/4 lengths back to Canvassed third, while favorite Yaupon checked in 8th. After the finish, as jockey Antonio Fresu celebrated, Zenden suffered a catastrophic injury to his left foreleg. Fresu was unseated, avoiding injury from the fall and by the oncoming horses who finished behind.

The official report from the stewards reads: "Shortly after the winning post, broke down and dislodged his rider. On examination it was revealed that Zenden had sustained an open fracture to his left foreleg and was subsequently humanely euthanized. A post-mortem examination will be conducted. Jockey A. Fresu was examined by the Club’s Medical Doctor and was passed fit to fulfil his remaining engagements." 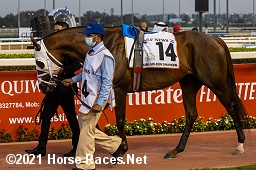 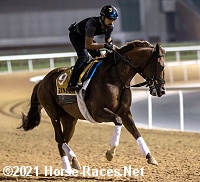 Left: Zenden in the paddock. Out of respect for the horse and his connections, there was no trophy presentation. Winning trainer Carlos David said, "There's no celebration or anything like that; I'm devastated. I would rather not win the race and have my horse back, a thousand times. I was hugging my horse while they put him down. I was able to say goodbye to him but there was going to be no way to fix his leg. No money, no trophy is going to bring my horse back."

Right: Zenden gallops on Friday morning. David added, "We were really excited, he was training so good. He just liked it here and we were really excited because everybody kept making comments about how good he looked. At 50-1 you really have no pressure because you're not the favorite, you're the underdog. But when a horse is happy, they're going to run big." He added, "The people who have seen me work, they know how much I love my horses. They're like my kids. I've been crying since the moment that horse broke down. It's really hard. I've never had a horse break down in a race since I've been a trainer. All I want is for them to make some kind of memorial for him. He broke the track record, he won the race." 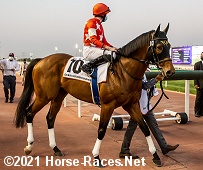 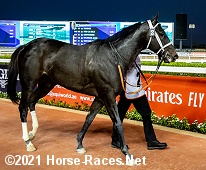 Left: Second place finisher Red Le Zele in the paddock leaving after the race. Jockey Ryan Moore said, "My horse ran super. 1200m was a bit sharp for him. He needs to step up in trip, but he ran a lovely race."

Right: Third place finisher Canvassed in the paddock before the race. Trainer Doug Watson said, "It was tough from out there. He's one that doesn't have a whole lot of speed early but he travelled well and I thought he ran a big race just running so well three weeks ago. Hopefully next year he'll have a campaign where we can spread out the races a little bit but I'm real pleased with him." 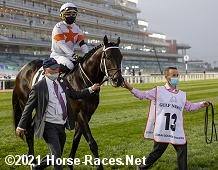 Eighth place finisher and beaten favorite Yaupon heads out to the track before the race. The Steve Asmussen trainee has a record of 4 wins, 0 seconds, and 0 thirds in 6 starts earning $323,264 for owners William and Corinne Heiligbrodt.

The $1 million Azizi Developments Al Quoz Sprint (G1) is contested at 1200 meters (about 6 furlongs) on the turf straightaway at Meydan. A field of 13 went to post with Space Blues sent off as the even-money favorite off his win in the stc 1351 Turf Sprint in Riyadh. In to challenge him included 7-2 second choice Khaadem, unraced since 4th in the Darley July Cup (G1), and 9-1 third choice Motafaawit, 2nd in the Nad al Sheba Turf Sprint (G3).

Jockey sent Equilateral to the lead exiting the chute through fractions of 23.92 and 45.27 while pressed by Moss Gill and stalked by Khaadem. In the final furlong, Extravagant Kid, 10th early under came through on the stands side to win by 1/2 a length over Final Song in 1:09.26. It was another neck back to Acklam Express third, while favorite Space Blues checked in 9th. 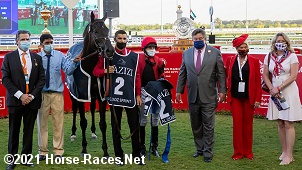 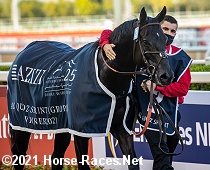 Left: Extravagant Kid in the winner's enclosure. Winning owner David Ross said, "His trainer Brendan Walsh had a good feeling about him, he came into the race well, Brendan had him prepped well. He really liked the venue here and we thought we would take advantage. As an 8-year-old, what about that?"

Right: Extravagant Kid heads back to the barn after the race. Walsh added, "No credit must go to me, I just put the saddle on. My lad here looked after him and he was very pleased with him." 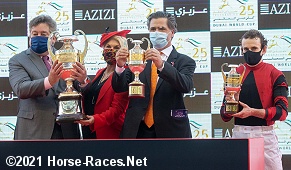 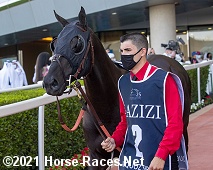 Left: The trophy presentation for the Al Quoz Sprint with owners David Ross, Dana Ross, James Bredin and jockey Ryan Moore. Winning jockey Ryan Moore said, "It was a very messy race. The speed looked like it was going to be stands' side but we had to make a decision. Space Blues and Khaadem were going, they were the best horses and gave me a bit of toe. The horse ran a super race at Keeneland (in the Breeders' Cup). He is a very talented horse. You'll have to watch out for Brendan when he comes back here!"

Right: Extravagant Kid in the paddock before the race. 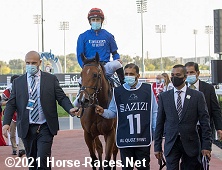 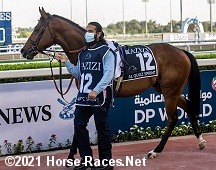 Left: Second place finisher Final Song returns after the race. Jockey Christophe Soumillon said, "She ran really well, unfortunately we were on the wrong side. I think if we had drawn on the outside she would probably win but it was a good run from her." Trainer Saeed bin Suroor added, "She ran a big race. She moved to the middle, but she finished her race really good, she managed to come second. This is her trip, 6 furlongs. We're going to keep her at the same trip. We are going take her back now to Newmarket and find a race for her in Europe." 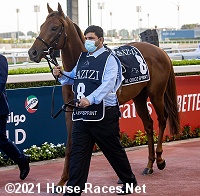 Ninth place finisher and beaten favorite Space Blues in the walking ring before the race. The Charlie Appleby trainee has a record of 8 wins, 3 seconds, and 1 third in 15 starts, earning $1,135,896 for owner-breeder Godolphin.