The $750,000 District One Godolphin Mile (G2) featured a field of 15 older horses go 1600 meters (about 1 mile) around one turn of the main track at Meydan Racecourse in Dubai. Midnight Sands was sent off as the 4-5 favorite off his win in the Burj Nahaar (G3), the main local prep for this race. In to challenge him included 8-1 second choice Chiefdom, second in the Burj Nahaar, and 10-1 third choice Secret Ambition, 5th in the Maktoum Challenge Round 3 (G1) after winning the Firebreak Stakes (G3).

Jockey Oisin Murphy sent Urban Icon to the lead out of the chute and he set fractions of 23.75 and 45.69 while pressed by Secret Ambition and stalked by Chiefdom. Turning for home, Secret Ambition took over through 3/4 in 1:09.79. Kept to task by Tadgh O'Shea, Secret Ambition drew off through the lane to win by 6 lengths over late-running Golden Goal in 1:35.36, just 37/100 off the track record. It was a neck back to deep closing Avant Garde third, while favorite Midnight Sands checked in 8th. 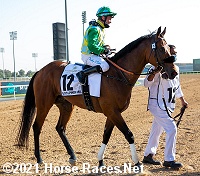 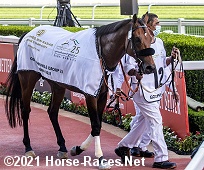 Left: Secret Ambition heads to the winner's enclosure. Winning trainer Satish Seemar said, "All week I've been saying that in this race there was no more experienced horse for this distance. At the post position draw, he was prominent in every race they would show him in the videos. He's the most deserving horse in this field and most experienced and it's perfect. With us they improve as they get older and this has worked out well. As planned, Tadhg did it by the book. This is what we live for here in our jobs. Nothing better than having a winner on this night."

Right: Secret Ambition heads back to the barn after the race. 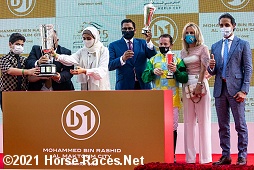 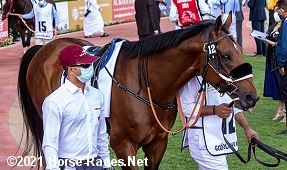 Left: The trophy presentation for the Godolphin Mile with Bupath Seemar, trainer Satish Seemar, Caroline Seemar and jockey Tadhg O’Shea accepting from Omar Khoory, Chief Assets and Hospitality Officer at the 25th Dubai World Cup. Winning jockey Tadhg O'Shea said, "I'm only a small part of big team, and it's great for all the team and credit must go to them. Satish told me the other day he was the best horse in the race and how right he was. We tried 1 1/4 miles with him last time and that didn't work. I had a lovely gate today and luckily Secret Ambition was on his best behaviour and he wasn't on the back foot jumping, so he broke well. I wanted to get to the lead if at all possible and luckily I was able to and it worked out good. I filled him up before I kicked. He went for his wind and had a nice breather, so I had plenty left and I felt if anyone came to me, he would pull out again."

Right: Secret Ambition in the walking ring. O'Shea added, "The whole racing world sadly lost Sheikh Hamdan bin Rashid Al Maktoum this week and I want to dedicate this to him. It was when I was champion apprentice in Ireland in 2001 that Sheikh Hamdan sponsored a trip to Dubai and I'm coming back here ever since. I have been here a long time and it wouldn't have been possible without him." 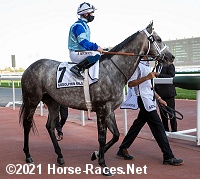 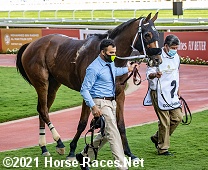 Left: Second place finisher Golden Goal heads out to the track. Jockey Sam Hitchcott said, "The winner was long gone but to be fair, if I was good enough, I was only two lengths behind him. The winner is a good horse on his day, he's proven that in the past. So it's a good run from him. My fellow travelled nicely, switched nicely when we came up onto the stretch we just came up to the outside. He stuck on very gamely. We ended up getting a great run up on the fence, it was nice. I was behind the best horse in the race which has gone and won. I had no excuses."

Right: Third place finisher Avant Garde heads back to the barn after the race. Jockey Luis Saez said, "It was not the trip we expected. We tried to be a little bit closer but he looked like when he broke he really couldn't get on, you know? And then, we were way behind. He closed pretty hard but it was a little late. He just couldn't get a hold of the ground. I think if he was right there close he would have been tough." 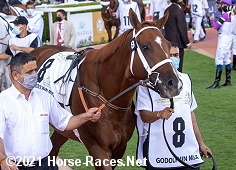 Eighth place finisher and beaten favorite Midnight Sands in the walking ring before the race. The Doug Watson trainee has a record of 6 wins, 1 second, and 1 third in 14 starts, earning $407,807 for owner The Cool Silk Partnership. 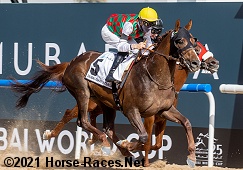 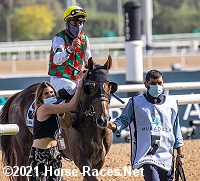 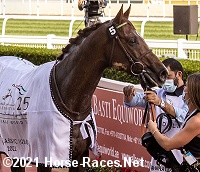 Left: Deryan heads to the winner's enclosure. Winning trainer Didier Guillemin said, "He was quite nervous last time when he ran in Riyadh. This time, he was much calmer and we rode him differently, a little further back. I'm extremely proud to win a Group 1 here and to win it for owner Sheikh Mansour is just amazing."

Right: Deryan heads back to the barn after the race. Winning jockey Ioritz Mendizabal said, "Last time in Riyadh, I was outside and he didn't gallop and relax. Today I spoke to the trainer and he said it was important, after (leaving) the gate to stop him and relax behind horses. He galloped and relaxed and after the first corner, I was in the (right spot). Turning (into the straight), I knew I would win."