The $750,000 Emirates NBD UAE Derby (G2) over 1900 meters (1 3/16 miles) on the main track at Meydan is the only age-restricted race on World Cup night, open to 3-year-olds and worth 100 points to the winner as part of the Kentucky Derby Championship Series, however southern hemisphere 3-year-olds are recognized as 4-year-olds in the north and are not eligible for the Kentucky Derby. Panadol was sent off as the 5-2 favorite in the field of 14, undefeated in 2 starts including the Al Bastakiya Stakes last out. In to challenge him included 4-1 second choice Soft Whisper, winner of the UAE 1000 Guineas before finishing 5th in the Saudi Derby, and 5-1 third choice France Go De Ina, winner of his last 2 starts in allowance company at Hanshin. 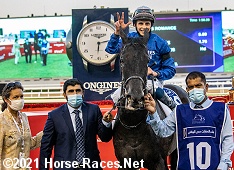 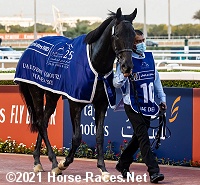 Left: Rebel's Romance in the winner's enclosure. Winning trainer Charlie Appleby said, "He is still very much a work in progress and he looked much better tonight than he did in Saudi Arabia. I think the biggest attribute to him today is that he was going to stay. We were always confident he was going to stay. Stepping up in trip was going to be his forte."

Right: Rebel's Romance heads back to the barn. Winning jockey William Buick said, "I was always where I thought I would be. He breaks a little bit slow, so I never thought I would be up there. He doesn't have much speed early and I was quite happy with the draw because I knew I could control where I would be and I did. Once I got out, he just bolted. I was a little bit worried I was getting there a little early; a little too quick, but that was some performance tonight. He's really come on and he's a big horse, but he's still a shell. He really knows how to use his power now." 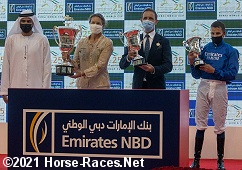 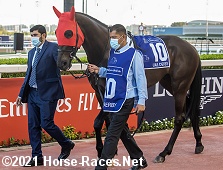 Left: The trophy presentation for the UAE Derby with Hesham Abdulla Al Qassim, vice-chairman and managing director of Emirates NBD, assistant trainer Sophie Chretien, trainer Charlie Appleby, and jockey William Buick. Appleby added, "We've all seen year-in and year-out here, you can't do well with your European horses until they start racing on [dirt]. It's invaluable the experience they gain on it and he had his two starts on the surface and it was always our plan. When you see your horses wide on the back of that turn, you start to worry, but he was always travelling so well into it. Down the back straight I saw half of them coming under the pump and I thought ‘don't worry, he's just coming good at the right time now.' It's great for the team. Most importantly it's good for His Highness Sheikh Mohammed, who has a lovely horse win on Dubai World Cup night. I'm just delighted we've managed to put one into the back of the net." 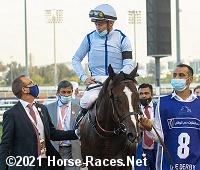 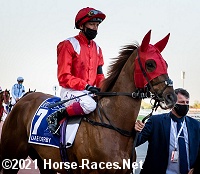 Left: Second place finisher and beaten favorite Panadol returns after the race. Trainer Salem bin Ghadayer said, "I'm so happy, I mean 1:56 - the time! We got beaten by a better horse. I couldn't be more happier than this. I still believe in his ability and I'm pretty sure we are going to have something amazing (in store) for him next season. He's a small baby, this is his third start. He was a late horse, we broke him at the end of September. I think he has a lot of things left to show. I am really looking forward to next season." Jockey Mickael Barzalona added, "He's a very straight-forward horse, he is very fast out of the gate. We travelled well in front, he just got beat by a better horse today. This is the first time he had a proper race. He's quite a one-paced horse, he stayed on the same pace all the way until the end. He just got beat by a good horse today."

Right: Third place finisher New Treasure heads out to the track before the race. Thady Gosden, assistant to winning trainer and father John said, "He ran a brilliant race. He obviously ran in Saudi Arabia before but that race was not nearly as impressive as this one. The winner is obviously very good and we're just thrilled he ran so well."

The horses break from the gate for the UAE Derby.