There are two sprints held on Dubai World Cup night, one on the dirt and one on the turf, both at the standard 6 furlong distance. The $2.5 million Gulf News Dubai Golden Shaheen (G1) is the feature sprint event on the card, contested at 1200 meters (about 6 furlongs) around one turn of the main track. After expected favorite and 2-time Breeders' Cup Sprint (G1) winner Roy H scratched, last year's runner-up X Y Jet was sent off as the 6-5 favorite in the field of 10 off an allowance win after disappointing in 4th in the Sunshine Millions Sprint. In to challenge him included 2-1 second choice Promises Fulfilled and 5-2 third choice Imperial Hint, third in the Breeders' Cup Sprint (G1) and the Pelican Stakes at Tampa Bay.

Jockey Emisael Jaramillo sent X Y Jet to the lead soon after the start and he set the pace through fractions of 24.46 and 46.79 while pressed by Imperial Hint and stalked by 45-1 longshot Matera Sky. Turning for home, X Y Jet opened a clear lead through 5f in 58.65. Matera Sky put in a late rally through the lane to no avail as X Y Jet cruised the rest of the way to win by 1 1/2 lengths in 1:10.75. It was another 1/2 length back to Imperial Hint third. 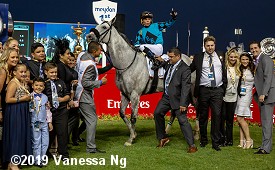 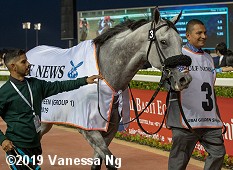 Left: X Y Jet in the winner's enclosure. Winning trainer Jorge Navarro said, "I don't know what I'm feeling right now. I guess it will hit me later on. I do feel a lot of pride in my horse. They knocked him and they forgot he lost twice here by a nose. But he did it today. He won the race and he was the best against the best horses here tonight." Winning jockey Emisael Jaramillo said, "I'm very happy. For me, this is so special. I'm very excited. I've come back two times and now I've won today, it's very emotional for everyone with the horse. What a horse he is."

Right: X Y Jet heads back to the barn. Brian Trump representing winning owner Rockingham Ranch said, "I can't believe he did it. Defeat in the past has made this victory that much sweeter. Today, it was his time. It was obviously disappointing when Roy H came out, but when this horse is on his game, he's very hard to beat in anything he contests. He looked very strong the entire way around, he was in the position he needed to be in, but seeing him cross that line was so exciting. He's such a special horse and the team has done a tremendous job with him." 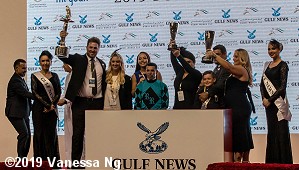 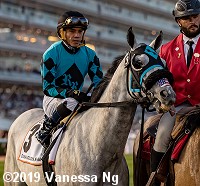 Left: The trophy presentation for the Golden Shaheen. Brian Trump (holding trophy on the left) representing winning owner Rockingham Ranch said, "I can't believe he did it. Defeat in the past has made this victory that much sweeter. Today, it was his time. It was obviously disappointing when Roy H came out, but when this horse is on his game, he's very hard to beat in anything he contests. He looked very strong the entire way around, he was in the position he needed to be in, but seeing him cross that line was so exciting. He's such a special horse and the team has done a tremendous job with him."

Right: X Y Jet heads out to the track before the race. Cute US flag nasal strip! 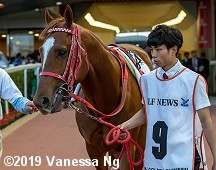 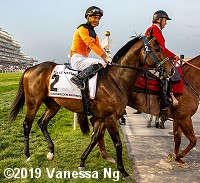 Left: Second place finisher Matera Sky in the walking ring. Jockey Yutaka Take said, "He ran a very good race and moved nicely throughout. He was in top shape and handled the ground even better today than he did during the week in training. He put in a very good effort against a top American challenger. A performance like that give us hope we can take him to the US in the future." Trainer Hideyuki Mori added, "He ran really well today. This was his first time sitting off the pace like that and he showed great restraint saving himself for the final part of the race. I'm very happy with his performance. Hopefully we can take him abroad again, maybe to the Breeders' Cup."

Right: Third place finisher Imperial Hint heads out for the post parade. Jockey Jose Ortiz said, "The winner X Y Jet outbroke me so I had to track him. The pace wasn't that fast, so X Y Jet was able to get a pretty easy time in front and that's why I came out three-wide before the turn to challenge. My guy ran on pretty good but I never felt we were going to get there. With a stronger pace it might have been different."

The $2 million Azizi Developments Al Quoz Sprint (G1) is contested at 1200 meters (about 6 furlongs) on the turf straightaway at Meydan. A field of 13 went to post with Blue Point sent off as the 3-5 favorite off wins in the Meydan Sprint (G2) and the Nad al Sheba Turf Sprint (G3), the local prep series for the Al Quoz. Last year he was scratched at the gate also as the favorite. In to challenge him included 5-1 second choice Stormy Liberal, winner of the Breeders' Cup Turf Sprint (G1) but second in the Joe Hernandez (G3) at Santa Anita, and 7-1 third choice Caribou Club, winner of the Joe Hernandez (G3) and the Seabiscuit Handicap (G2).

Jockey Flavien Prat sent 21-1 Belvoir Bay to the front and he set the pace down the chute and onto the course proper through fractions of 25.16 and 46.32 while pressed by 9-1 fourth choice Sands of Mali and stalked by Blue Point and Stormy Liberal. At the 3/16 pole jockey William Buick sent Blue Point to challenge and he took over inside the 1/8 pole through 5f in 57.86. Kept to task by Buick, Blue Point cruised the rest of the way to win by 1 1/4 lengths over Belvoir Bay in 1:08.39. It was another 3/4 length back to Stormy Liberal third. 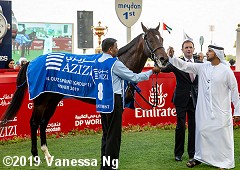 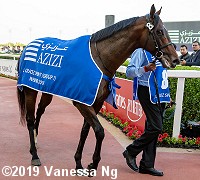 Left: Blue Point in the winner's enclosure. Winning trainer Charlie Appleby said, "You have got a combination here of William and the horse. They thrive off each other. William knows him inside out. I knew from the body language, as much as you never get confident too soon, but I felt that William had pretty much everything covered there. I'm delighted. I have always been very fond of him, ever since his 2-year-old days and he's doing what we always hoped he would do one day and that is to become a finished article in the top sprinting division. We all know it's a tough game but if he turns up fit and well, he is going to be there to try and defend his crown in the King's Stand Stakes."

Right: Blue Point heads back to the barn after the race. 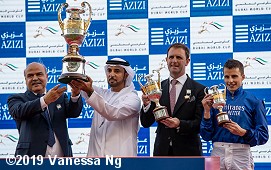 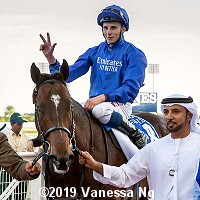 Left: The trophy presentation for the Al Quoz Sprint with trainer Charlie Appleby next to jockey William Buick on the right.

Right: Blue Point heads into the winner's circle after the race. Winning jockey William Buick said, "That was nice and straightforward and the horse deserved it. He has been foot-perfect in his two lead-up races to this and he has copied that today. He travelled really strongly and has again shown a great turn of foot. When he got to the front he knows he has done enough. It is great at the age of five he is showing everyone just how good he is and he has always shown us so much speed. I remember riding him as a 2-year-old and I'd never ridden a faster horse before he made his debut. He has developed into a top-class sprinter now." 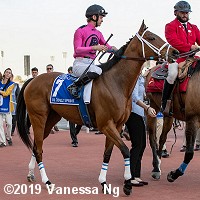 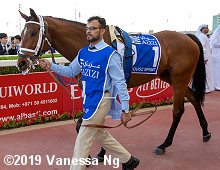 Left: Second place finisher Belvoir Bay heads out to the track before the race. Jockey Flavien Prat said, "I knew she had improved going into the race and could run well, and that's what she did. She had a good trip through the race and liked the track. She's a great fighter but just couldn't catch the winner."

Right: Third place finisher Stormy Liberal in the walking ring. Jockey Joel Rosario said, "He ran really well and the one in the lead looked very good. All went well through the race." Trainer Peter Miller, who trains both Belvoir Bay and Stormy Liberal added, "They were super runs, they both ran their races, I can't complain about it. We just got beat by the home team and that was probably the difference. I think maybe if the race was at Santa Anita we might have had the edge. All congratulations to Sheikh Mohammed and his team. Blue Point is a super horse and it was no disgrace finishing second and third to him. I'm very pleased we came over. I'm hoping maybe I'll see Blue Point in the Breeders' Cup at Santa Anita. He can come and we've got a score to settle."