The $1.5 million District One Godolphin Mile (G2) featured a field of 14 older horses go 1600 meters (about 1 mile) around one turn of the main track at Meydan Racecourse in Dubai. After African Ride was scratched at the gate, Muntazah was sent off as the 4-5 favorite in the field of 12 off wins in the Firebreak (G3) and the Burj Nahaar (G3) at Meydan. In to challenge him included 5-2 second choice Coal Front, winner of the Razorback Handicap (G3), and 5-1 third choice True Timber, 7th in the Pegasus World Cup (G1).

Jockey Mickael Barzalonoa sent 5-1 defending champion Heavy Metal to the lead exiting the chute and he set fractions of 24.43, 47.61, and 1:11.96 while pressed by Muntazah and stalked by 50-1 Good Curry and Coal Front. Turning for home, Heavy Metal continued to lead through 7f in 1:23.91 but Coal Front, confidently handled by Jose Ortiz, rallied late to win by 3/4 length in 1:36.51. It was a long 5 3/4 lengths back to Muntazah third. 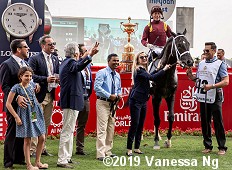 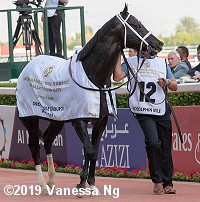 Left: Coal Front in the winner's enclosure. Winning co-owner Sol Kumin said, "He has had some health issues, on and off but always had a ton of talent. And Todd Pletcher has done a great job with him. We thought if he could handle the mile 1/16, we would come back to the mile and everything worked out well. It was worth the trip. We were lucky enough to own a part of Mind your Biscuits a few years ago. I wasn't sure if he was winning. I was hoping and I was worried. I thought he would run out of gas, but he didn't." Trainer Todd Pletcher added, "He had a fantastic run. Our whole team is very proud of him."

Right: Coal Front heads back to the barn after the race. 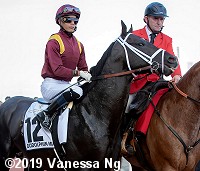 Left: The trophy presentation for the Godolphine Mile.

Right: Coal Front heads out to the track before the race. Winning jockey Jose Ortiz said, "The emotion right here is for my family back home and I just want to say that I love them all. The horse felt great for me and he broke well, which was important. I wanted to be on or near to the lead and it worked out perfectly. I knew I had to be patient to time my run for home. I had two horses in-front of me which gave me a great lead, and I just sat and watched Jim Crowley and Muntazah as he is the main man around here. I followed him and my horse dug in for me late on and he has done it well." 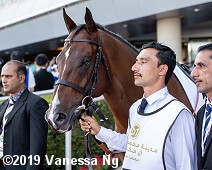 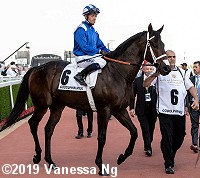 Left: Second place finisher Heavy Metal in the walking ring before the race. Trainer Salem bin Ghadayer said, "A month ago many people thought he was at the end of his career, but he has come back to his best. He was just beaten by a better horse on the day.

Right: Third place finisher and beaten favorite Muntazah heads out to the track. Jockey Jim Crowley said, "We didn't have a bad trip but he didn't feel like the same horse as last time." Trainer Doug Watson added, "He ran a career best on his last start and I wouldn't have mind trying to take on today's winner that day. But we were going back to the well three weeks later and he may just have got a bit tired. He's going to have a really good future next season." 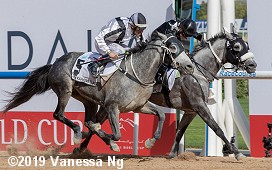 Kicking off World Cup night was the $1 million Mubadala Dubai Kahayla Classic (G1), a 2000 meter (about 1 1/4 mile) trip over the main track for Purebred Arabian horses. Jockey Tadgh O'Shea sent 4-1 second choice AF Maher to the lead through fractions of 26.73, 52.50, and 1:19.40 while pressed by 5-1 third choice Al Shamoos and stalked by 30-1 Barnamaj. Around the turn jockey Pierantonio Convertino, 10th early aboard Fazza Al Khalediah, circled the field and swept to the front through 1 mile in 1:47.62. He continued to lead to the 1/8 pole but AF Maher fought back late to win by a nose in 2:15.67. It was a long 10 1/4 lengths back to late-running 70-1 Amwaj third, while defending champion and even-money favorite Tallaab Al Khalediah chased the pace in 4th most of the way but faded late to finish 5th. 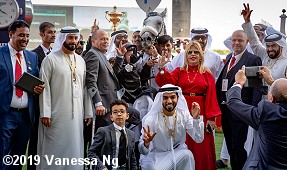 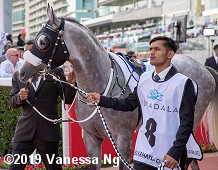 Left: AF Maher in the winner's enclosure. Winning jockey Tadhg O'Shea said, "You need courage and that is what he has. The horse got a great reception coming back in. My wife Debbie and my two boys are at home watching on the couch. They rang before the race to say good luck and there would have no-one cheering louder than them. I had such a willing partner out there today. He was still very unexposed and it was always the plan to take him to the front and set the pace. It's been ten years since I won this race on the mighty Mizzna and it's just absolutely amazing to win it again. The runner-up came and gave us a bump and many horses would have downed tools but he battled right to the line." Winning trainer Ernst Oertel said, "This is what Arabians do. They battle. I'm so happy and I'm lost for words. I am just so proud."