The $6 million Dubai Sheema Classic (G1) is the last of four scheduled turf races held on Dubai World Cup night. A field of 9 older horses went 2410 meters (about 1 1/2 miles), one complete circuit of the turf oval at Meydan Racecourse in Dubai. Breeders' Cup Turf (G1) winner Main Sequence was sent off as the 2-1 favorite in the world pool. In to challenge him included 11-4 second choice Harp Star, winless since the Sapporo Kinen (G2) back in August, and 3-1 third choice Flintshire, winner of the Hong Kong Vase (G1). 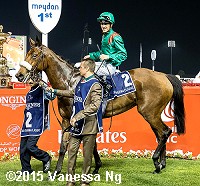 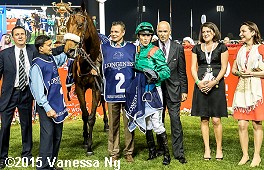 Left: Dolniya in the winner's enclosure. Trainer Alain de Royer-Dupre said, "She improved throughout her three-year-old career and again from three to four. It is not a surprise as she was in very good condition, but it was very difficult to go against Flintshire because he is older and he knows her well. We had a good trip. She has a long action and she stayed ahead and alert. We know she is a bright filly, she’s a beautiful pedigree from the Aga Khan family of Dalakhani, she has speed and she can stay. When she has a good race, she needs pace. She was in a good position and I was confident."

Right: The connections pose with Dolniya in the winner's enclosure. 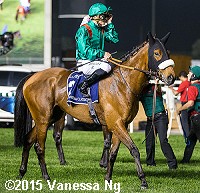 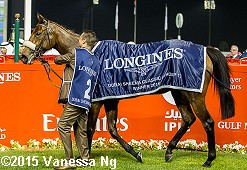 Left: Dolniya heads to the starting gate before the race.. Winning jockey Christophe Soumillon said, "She was in very good form. The pace suited us. I was a bit scared before the race that the pace would be slow, so I came out of the gates fast in case I needed to make the running. But finally the pace was good and it helped a lot, because every time in France there is no pace and she has a long acceleration."

Right: Dolniya with his winner's blanket. 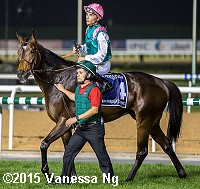 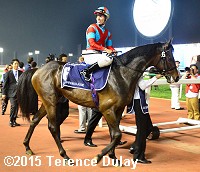 Left: Second place finisher Flintshire behind the starting gate. Jockey Maxime Guyon said, "I was just behind the leaders and coming into the straight I was able to follow the winner. He ran really well in the straight, but unfortunately he could never catch the winner. He met a really good filly."

Right: Third place finisher One And Only heads out to the track before the race. Jockey Cristian DeMuro said, "He ran very good. A little more distance would be better." 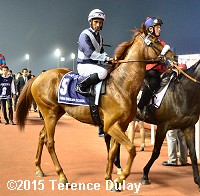 Seventh place finisher and beaten favorite Main Sequence heads out to the track before the race. Jockey Rajiv Maragh said, "A little disappointing because he didn’t come with his usual run. I was really happy that he put me up there really easily and I felt like I was in position coming off the turn to make a good run but unfortunately it just didn’t pan out today." 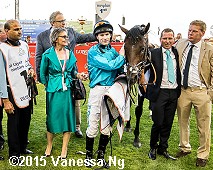 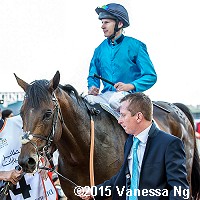 Left: Brown Panther in the winner's enclosure. Winning trainer Tom Dascombe said, “After 100m I was confident this could be our day, and really well done to Richard Kingscote. He kept telling me he was fit for the ride after his injury, and although I was a bit sceptical, he’s proved his point, and how."

Right: Brown Panther returns after the race. Jockey Richard Kingscote said, “He felt great during the race and we got an early tow into it and we had a nice position. This horse has been unbelievably good to my career and to Tom’s. He means a lot to me and this is the biggest win of my career so far." 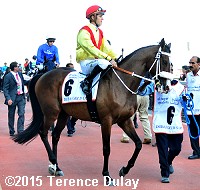 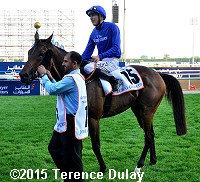 Left: Second place finisher Star Empire heads out for the post parade. Jockey Christophe Soumillon said, "I rode him like usual and when he started passing horses in the straight I thought he might be third or fourth. But the pace was quite good and my horse has real stamina. He finished lame last time so it was great to see him bounce back."

Right: Third place finisher Ahzeemah returns after the race. Jockey James Doyle said, "It sounds silly but we were drawn wide in 15 and it took time to get across, but we did get over and get a nice position. We had a lovely trip around and he is a tough horse, it is just a shame we didn't keep second. I have no complaints and the winner looks a very good horse."