The $10 million Dubai World Cup (G1), celebrating its 19th renewal, is the world's richest horse race and the highlight of the world's richest day of racing, with $27.25 million in prize money over 9 races on Saturday night at Meydan Racecourse in Dubai. A full field of 16 older horses went 2000 meters (about 1 1/4 miles) over the Tapeta main track under partly cloudy skies and temperatures in the 80's. Military Attack was sent off as the 7-2 favorite off his win in the Hong Kong Gold Cup (G1) at Sha Tin. In to challenge him included 13-2 second choice Ron the Greek, winner of the Jockey Club Gold Cup (G1) and then an allowance race in Saudi Arabia, and 7-1 third choice Ruler of the World, third in the QIPCO Champion Stakes (G1) last out.

Jockey Paul Hanagan sent 30-1 Mukhadram to the front first time by and he set easy fractions of 25.78, 49.94, 1:14.15, and 1:38.01 over the fast track while stalked by 11-1 Hokko Tarumae, 15-1 African Story, and Ron the Greek to their outside. Entering the lane, jockey Silvestre De Sousa asked African Story to challenge and he easily took over the lead at the 3/16 pole. Kept to task, African Story drew off in the final furlong to win by 2 3/4 lengths in a time of 2:01.61. It was another 4 1/4 lengths back to late-running 39-1 Cat O'Mountain third, while favorite Military Attack checked in 10th Results for US wagering: 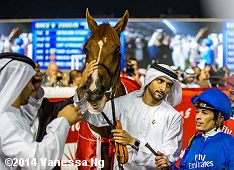 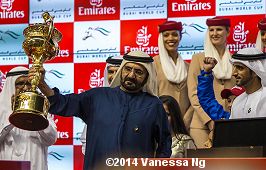 Left: African Story in the winner's enclosure. Winning trainer Saeed bin Suroor said, "This is our sixth win in the race and it has been a long time in coming. There has been a lot of pressure from a lot of people, but I thought two years ago this was the right horse for this race. In my heart I thought this horse could win – he is something really special and I told Sheikh Mohammed this two years ago. 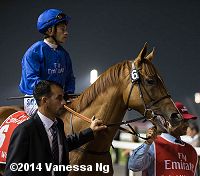 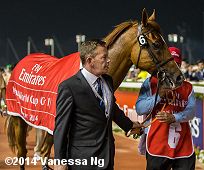 Left: African Story heads out to the track before the race. Winning jockey Silvestre De Sousa said, "African Story has good track form having won the Godolphin Mile two years ago. He travelled well and quickened great and I am over the moon. There is pressure, but at the same time I think I have shown that I have given my best and that there may still be more to come." This is a big thrill and I dedicate this win to my mother and I will give her my golden whip." 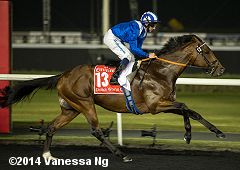 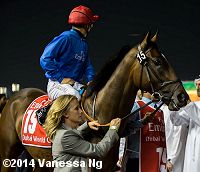 Left: Second place finisher Mukhadram leads first time by . Jockey Paul Hanagan said, "I am very proud of him and it was a tremendous effort from William Haggas to have him ready to run after such a long layoff. We went forward and I got a breather in to him down the back straight. We kicked at the top of the home run and for a moment I thought I had nicked it but in the end we were beaten by a very good horse on the night."

Right: Third place finisher Cat O'Mountain heads out for the post parade. Jockey Mikael Barzalona said, "He ran an absolute brilliant race considering where he had to come from. I really think he could have been closer with a better draw but I'm absolutely over the moon with that result." 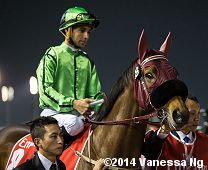 Tenth place finisher and beaten favorite Military Attack heads out for the post parade. Jockey Joao Moreira said, "Overall it wasn't a bad race. I got checked a few times in the race and he didn't really enjoy the surface. We'll have to see what we have in the next couple of months."