The $10 million Dubai World Cup (G1), celebrating its 17th renewal, is the world's richest horse race and the highlight of the world's richest day of racing, with $27.25 million in prize money over 9 races on Saturday night at Meydan Racecourse in Dubai. A full field of 14 older horses went 2000 meters (about 1 1/4 miles) around two turns of the 1750 meter (about 1 1/8 mile) Tapeta synthetic oval, with So You Think sent off as the 2-1 favorite, unraced since checking in 6th in the Breeders' Cup Classic (G1). In to challenge him included 7-2 second choice Game On Dude, winner of the San Antonio (G2) last out after finishing second in the Breeders' Cup Classic, and 9-2 Royal Delta, winner of the Breeders' Cup Ladies' Classic but second in the Sabin (G2) at Gulfstream before shipping to Dubai.

Jockey Shinji Fujita sent 22-1 Transcend to the lead first time past the stands and he set early fractions of 25.72 and 49.94 while pressed by So You Think and Royal Delta, with 7-1 Capponi stalkingt them in fourth. Down the backstretch, Capponi moved up to take over the lead through 3/4 in 1:13.60 and 1 mile in 1:37.78. 35-1 Monterrosso, 7th early, came out wide into the lane to take over the lead at the 3/16 pole, drawing clear to win by 3 lengths in a time of 2:02.67 over the fast Tapeta surface, with jockey Mickael Barzalona standing up in the irons for the final 50 yards. It was another 1/2 length back from Capponi to 32-1 Planteur third, and 1/2 more to favorite So You Think fourth. 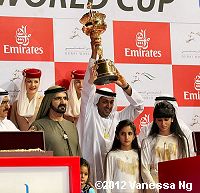 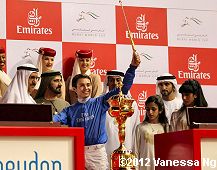 The winning connections celebrate in the winner's enclosure. Winning owner Sheikh Mohammed al Maktoum said, "Yes it's great. You know we had a chance like everybody, but now this horse pulled it out and I'm very happy. I know (jockey Mickael Barzalona) gave him a great ride. I am so happy, I am so happy."

Trainer Mahmoud Al Zarooni said, "I can't explain what I am feeling at this moment. No one can say how happy I am to come out as champion on such a night. This horse showed tonight that he is up to the challenge on taking on the best in the world." 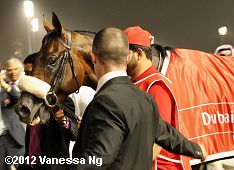 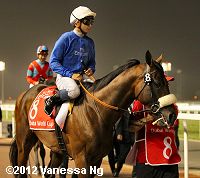 Left: Monterosso heads back to the barn with his winner's blanket. Simon Crisford, racing manager for Godolphin said, "It's a fantastic effort. The field had so much depth that we were hoping for good runs but we couldn't be confident going in. It's unbelievable to have first and second. They are two really fantastic horses."

Right: Monterosso heads out for the post parade. Winning jockey Mickael Barzalona said, "I couldn't believe when no one was coming after me. This is a dream. I have no words to describe what I feel right now." Asked about his celebration which mirrored the Epsom Derby celebration, standing up in the irons early, he added: "I just had to. I had no choice." Barzalona was fined 5000 dirhams (about $1360 U.S.) for improper riding. 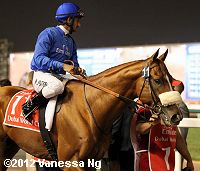 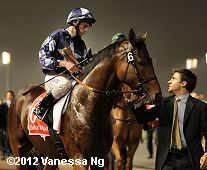 Left: Second place finisher Capponi heads out for the post parade. Jockey Ahmad Ajtebi said, "It was a great effort. I was confident he'd finish in the first three and he ran up to his best. I beat the winner the last time we raced but obviously he's improved and he ran third in this race last year, so it's great for the team. My horse has come from handicaps to running second in the World Cup after a very good Carnival, so I'm delighted with that."

Right: Third place finisher Planteur heads out for the post parade. Trainer Marco Botti said, "Ryan (Moore) said the horse got a bump at the start and was further back than he wanted to be. If not for that, he'd have been closer." Owner Ahmad Al Falasi added, "It was a very good pace and he just kept on improving as the race progressed. For me this is like a win as he is making a comeback after having not run for more than 200 days. I am very happy with this result and he goes straight to Ireland for the (Tattersalls Gold Cup) in May." 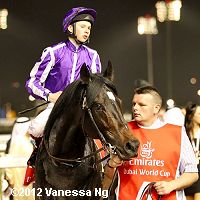 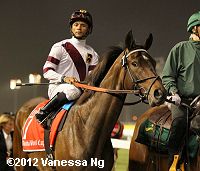 Left: Fourth place finisher and beaten favorite So You Think heads out for the post parade. Jockey Joseph O'Brien said, "I had the ideal position behind the leader but he just didn't quicken on that surface. It was too dead for him."

Right: Ninth place finisher and the best American finisher Royal Delta heads out for the post parade. Jockey Jose Lezcano said, "We had a good position but in the middle of the turn, the horse in front of me quit so I had to wait a little longer than I wanted to. She gave me a good run at the end but this surface is a little different – it's a little sticky."