The $5 million Dubai Sheema Classic (G1) is the last of three turf races held on Dubai World Cup night. A full field of 16 older horses went 2410 meters (about 1 1/2 miles), one complete circuit of the turf oval at Meydan Racecourse in Dubai. 2009 Breeders' Cup Turf runner-up Presious Passion was sent off as the lukewarm 3-1 favorite off a win in the Mac Diarmida at Gulfstream Park. In to challenge him included 9-2 second choice and 4-year-old filly Buena Vista, winner of the Kyoto Kinen last out, and 5-1 third choice Spanish Moon, a close second in the Hong Kong Vase after finishing fourth the Breeders' Cup Turf.

As expected, favorite Presious Passion went to the front entering the clubhouse turn under minimal urging by regular rider Elvis Trujillo, and he was stalked by 21-1 Golden Sword and 17-1 Jukebox Jury down the backstretch. Entering the stretch with 3 furlongs to go, Presious Passion tired and was easily passed by Golden Sword at the 5/16 pole, who led the pack to the 1/4 pole. 12-1 Dar Re Mi, who was in mid-pack early, put in her rally in midstretch to take over the lead at the 1/8 pole, with Spanish Moon chasing her in second. Buena Vista put in a strong rally late but was left with too much ground to make up, as Dar Re Mi held her off by 3/4 length at the line to complete an all-female exacta in 2:31.84 over "good-to-firm" turf. It was just a head back to Spanish Moon third, while favorite Presious Passion weakened through the lane to finish last. 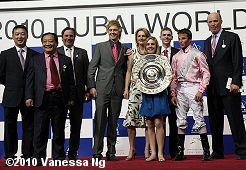 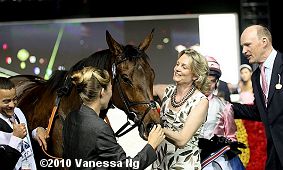 Left: The trophy presentation with owner Lord Andrew Lloyd-Webber's wife and three children along with jockey William Buick and trainer John Gosden. Buick said, "She broke well and was always giving me so much confidence and then she found another gear at the end. A lot can happen in these races. We need a bit of luck, but I was always feeling good about the race. In fact, she just kept feeling better and better. I tracked Frankie, and though we well behind early, I knew he'd know all about the pace around here. I was confident when I saw this filly after Super Thursday because she looked as though she'd just come from California rather than having spent the winter in England."

Right: Lady Lloyd-Webber gives Dar Re Mi a pat as trainer John Gosden looks on from the right. 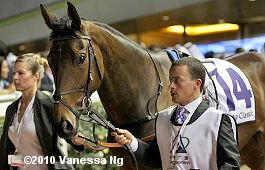 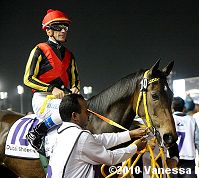 Left: Dar Re Mi in the paddock before the race. Her trainer John Gosden said, "It's been a big night. She's a remarkable filly to come from the cold and win out here especially from the 14 stall. I told William to get a nice position but to sit and chill on the bend as it's a long way home and I'm delighted that he did not panic. That's his first winner for me and hopefully the start of a long relationship."

Right: Second place finisher Buena Vista heads out to the track before the race. Her jockey Olivier Peslier said, "She travelled well and ran well. It was a very tough race and a tough turf track." 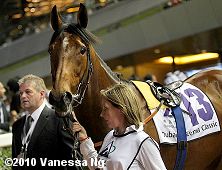 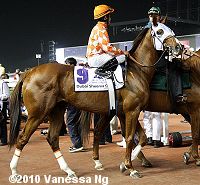 Left: Third place finisher Spanish Moon in the paddock before the race. His jockey Ryan Moore said, "This horse always does his best, he never lets you down. He's just found two horses too strong on the night."

Right: Last place finisher and beaten favorite Presious Passion heads out to the track before the race. His jockey Elvis Trujillo said, "He didn't take to the course. It was just a little soft. He wasn't way out in front like usual."