There are now two sprints held on Dubai World Cup night, one on the "dirt" and one on the turf. The $2 million Dubai Golden Shaheen (G1) is the feature sprint event on the card. Originally contested at 1200 meters (about 6 furlongs) on a dirt straightaway at Nad al Sheba, at the new Meydan Racecourse in Dubai it is now run around one turn over the Tapeta synthetic track. A field of 10 older horses went to post on Saturday night, with Gayego sent off as the 3-2 favorite off a second place finish in the Al Shindagha Sprint after finishing a close fourth in the Breeders' Cup Turf. In to challenge him included 2-1 second choice Rocket Man, winner of the Kranji Stakes in Singapore last out, and 9-2 third choice Kinsale King, winner of three straight including the Palos Verdes at Santa Anita and the Vernon Underwood at Hollywood Park.

Jockey Shinji Fujita sent 33-1 Laurel Guerreiro to the lead down the backstretch to set the pace, and he was stalked by Rocket Man with Kinsale King just behind those two. Entering the stretch, Laurel Guerreiro tired allowing Rocket Man to gain the lead at the 1/4 pole. Kinsale King and jockey Garrett Gomez moved alongside to challenge at the 3/16, and after a long duel, Kinsale King pulled away for the hard fought win by 1/2 a length in 1:10.89. It was another 2 lengths back to late-running 12-1 One World third, while favorite Gayego failed to fire, trailing throughout to finish 8th. 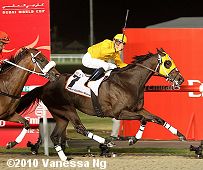 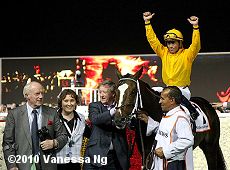 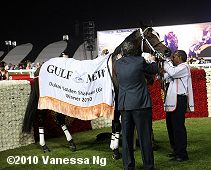 Left: Kinsale King and his connections celebrate after the race. His trainer Carl O'Callaghan said, "I knew I had it won when I put the saddle on him. I wasn't too worried about who else was in the race, but it was just amazing. Leave it to the Irishman. He's a great horse, has a lot of heart. he's a grinder and he just keeps going. His preparation went well. We took him to Golden Gate to work him on the Tapeta surface there and he went well and he travelled over here well – there was never one hitch. I don't need to do a whole lot with him. I just give him his eggs and his Guinness, and let him go. This is what I want to do with my life and hopefully this proves that I can train and that it opens up a few more doors for me." O'Callaghan confirmed he will send Kinsale King to Royal Ascot for the Golden Jubilee Stakes.

Right: Kinsale King gets his new winner's blanket. His jockey Garrett Gomez said, "It was wonderful. I just wanted to get involved in the race early and once he got involved, he traveled well the whole way and in the last 400 meters, he stayed on well. He ran a wonderful race." This is the 10th American-trained winner of the Golden Shaheen since its inception in 1996. 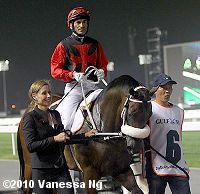 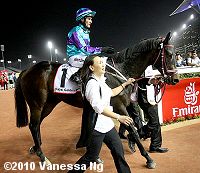 Left: Second place finisher Rocket Man heads out to the track before the race. His jockey Robert Fradd said, "The winner came in on me a bit at about the 600 meters. He'd never really been bullied like that before and it took him a little longer than I wanted for him to really quicken up in the straight, but I could just never get on terms with the winner."

Right: Third place finisher One World heads out to the track. His jockey Darren Beadman said, "I had a nice position, box seat, 3 back on the rails but I got a slight check at about the 600 meters and it knocked him back a bit but he kept on fighting in the straight. He gave his all and we can't complain too much."

The second race on the card was the $1 million Al Quoz Sprint (G3), formerly run earlier in the meet but moved to Dubai World Cup night this year. It is a 1200-meter (about 6 furlong) sprint on the turf straight at Meydan. A full field of 16 older horses went to post with Breeders' Cup Turf Sprint winner California Flag sent off as the 3-2 favorite, off a 5th place finish in the Hong Kong Sprint last out. In to challenge him included 9-2 second choice Sirocco Breeze, winner of the Nayef and the Meydan Masters, and 7-1 third choice All Silent, 11th in the Newmarket Handicap at Flemington last out.

California Flag on the far side and 51-1 Star Crowned on the near side went to the front to contest the early pace down the chute and into the main part of the course, with 18-1 Joy and Fun stalking just behind the leaders. Star Crowned tired at the 3/8 pole, but Joy and Fun was gaining well through the lane. Inside the 1/16 pole, Joy and Fun passed California Flag to take over the lead for good, then was all out to hold off late-running 23-1 Fravashi to prevail by 3/4 length in 1:09.80 over good-to-firm turf. It was just 1/4 length back to favorite California Flag third. 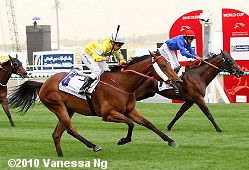 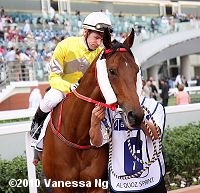 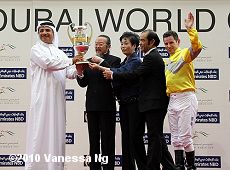 Left: Joy and Fun before the race. His jockey Brett Doyle said, "That was great. The horse deserved it as he's bumped into Sacred Kingdom a number of times. There's no straight 6 furlongs (at Sha Tin in Hong Kong) and that's what he needs. The trainer chose the right race, he stays 1400 meters and he outstayed the American horse."

Right: The trophy presentation with with owners Mr. & Mrs. Wong Chun Nam, trainer Derek Cruz, and jockey Brett Doyle. His trainer Derek Cruz said, "I haven't got the words to express it hardly. I feel really proud, he pinged out of the gates and was more prominent than I thought he would be and Brett kept him there all the way and with a great ride and I guess at home he is more of a 1400 meter horse, so his stamina for this straight told in the end." 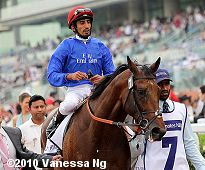 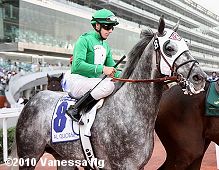 Left: Second place finisher Fravashi heads out to the track before the race. His jockey Ahmed Ajtebi said, "I drove him to get there but he was never quite quick enough, he is a sort of one action horse who lacked the pace of the winner but it was a great effort."

Right: Third place finisher California Flag heads out to the track. His jockey Joe Talamo said, "He broke well and he relaxed, he just got outrun in the end. They just out quickened him in the last 1/16."