Labor Day marks the end of the Del Mar summer meet. Just 8,654 fans came out on an overcast holiday Monday with temperatures in the low 70's, with the main track rated fast and the Jimmy Durante Turf Course going firm. The feature race on closing day and the final stakes of the meeting is the $300,000 Del Mar Futurity Stakes (G1) for 2-year-olds sprinting 7 furlongs on the main track. Roadster was sent off as the 7-10 favorite in the field of 6 off his debut win by 4 1/4 lengths on July 29. In to challenge him included 8-5 second choice Game Winner, a debut winner by 5 3/4 lengths on August 18, and 7-1 third choice Rowayton, a debut winner by 1 3/4 lengths on July 21.

Jockey Drayden Van Dyke sent Rowayton loose on the lead through fractions of 22.53 and 45.35 while as many as 4 1/2 lengths in front of Roadster and Game Winner stalking second and third respectively. Entering the lane, Rowayton continued to hold a 2 1/2 length lead through 3/4 in 1:10.05, but Game Winner, confidently handled by Mario Gutierrez, rallied 3 wide to win going away by 1 1/2 lengths in 1:23.18. It was another 1/2 length back to favorite Roadster third. 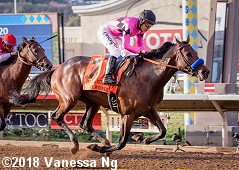 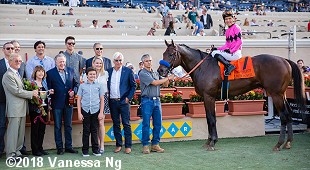 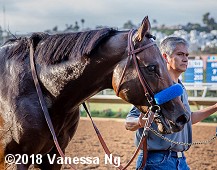 Left: Game Winner in the winner's circle. Winning trainer Bob Baffert said, "Going down the backside (Rowayton) was way out there and sometimes if you get out there like that you can steal a race. I just hoped my guys knew they were in good spots. I knew they'd have to sprint home. I knew coming in that (Game Winner) was coming back a little quick, but he's a big strong heavy horse and I knew he could handle it. I'd rather run him again than keep working him."

Right: Game Winner heads back to the barn after the race. 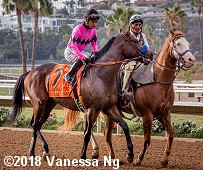 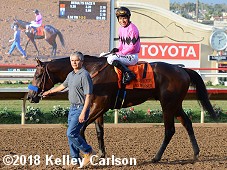 Left: Game Winner in the post parade. Winning jockey Mario Gutierrez said, "He (Baffert) told me 'You know how to ride good horses; go ahead and ride him like you can.' He said he wanted me to give him a little help out of the gate, then he said he thought he'd be strong for the finish. He was so right. I'm so happy for this opportunity; I'm so happy this worked out this way." 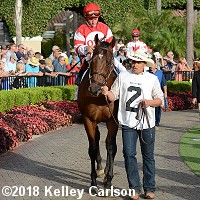 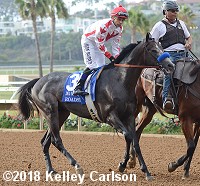 Left: Second place finisher Rowayton in the paddock. Jockey Drayden Van Dyke said, "That was the plan – to just go for it. He did and he ran good. He fought me on changing leads once more; he fought me on the right (lead). But he'll learn; he'll get better."

Right: Third place finisher and beaten favorite Roadster in the post parade. Trainer Bob Baffert said, I'm a little disappointed in (Roadster) but it was only his second outing and sometimes the second out when you break their maidens they can get a little flat on you." Jockey Mike Smith added, "I don't know what to say; I'm at a loss for words. I thought he'd run a whole lot better."


Kicking off the closing day stakes trio was the $100,000 Del Mar Juvenile Fillies Turf Stakes for 2-year-old fillies going 1 mile on the Jimmy Durante turf course. Debut winner Summering was sent off as the 3-10 favorite in the field of 11 over 17-2 Angel Alessandra, a maiden winner at 2nd asking last out, and 11-1 Kathryn's Sky, 3rd in her debut. 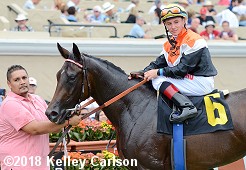 Summering in the winner's circle. Winning trainer Craig Bernick said, "This is a very special place for our family. I think this is my 24h consecutive summer coming out here and the second since my grandfather (Leonard Lavin) passed away. It's nice to have a filly like this -- the fourth generation in the family that we've owned -- win a stakes in her second start. We'll go on to Santa Anita and if she wins again we'd consider the Breeders' Cup (Juvenile Fillies Turf) but she'd have to win well. One step at a time."

Winning jockey Drayden Van Dyke said, "This is sweet; to win a stakes in these silks (Glen Hill Farm, where he got his start riding for trainer Tom Proctor) makes this so special. Today I had what you'd call a golden trip. She was always there and fired big. And I had a tough time pulling her up; she wanted to keep on going. She's a good one." The 23-year-old Van Dyke won his first riding title at Del Mar, finishing the meeting with 42 victories, and also led all riders with 9 stakes wins. Last year's champ Flavien Prat finished second behind Van Dyke in both categories, 37 wins and 7 stakes wins.


The $75,000 C.E.R.F. Stakes featured a field of 7 older fillies and mares (non-winners of stakes other than state-bred) sprinting 6 furlongs on the main track. Last year's winner Miss Sunset was the 3-5 favorite off her 2nd place finish in the Desert Stormer (G3), over 4-1 Classy Tune, 4th in the Desert Stormer, and 13-2 Show It N Moe It, 2nd in the Fleet Treat.

Miss Sunset in the winner's circle. The Jeff Bonde trainee improved her record to 10 wins, 3 seconds, and 2 thirds in 18 starts, earning $879,395 for owners Alan Klein and Philip Lebherz.