Labor Day marks the end of the Del Mar summer meet. Just 9,177 fans came out on an overcast holiday Monday with temperatures in the low 70's. The feature race on closing day is the $300,000 Del Mar Futurity Stakes (G1) for 2-year-olds sprinting 7 furlongs on the main track. Run Away, undefeated in 3 starts was sent off as the 5-2 favorite in the field of 9 off wins in the Santa Anita Juvenile and the Best Pal Stakes (G2). In to challenge him included 7-2 second choice Zatter, a debut winner on August 20, and 4-1 third choice Bolt d'Oro, a debut winner on August 5..

Jockey Mike Smih sent 5-1 Soul Streit to the lead exiting the chute and he set fratcions of 21.88 and 44.54 while pressed by Run Away and stalked by Zater and 81-1 longest shot Master Ruler. Entering the lane, Soul Streit tired allowing Zatter to inherit the lead through 3/4 in 1:09.89. However, Bolt d'Oro, 8th early under Corey Nakatani, came out 4 wide to circle the field on the turn and rallied to win by 3/4 length in 1:22.91 over the fast main track. It wss a long 4 3/4 lengths back to favorite Run Away third. 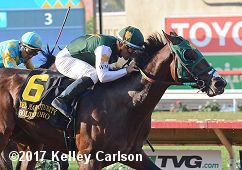 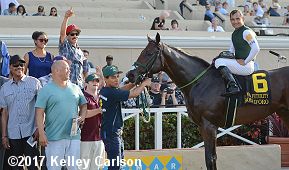 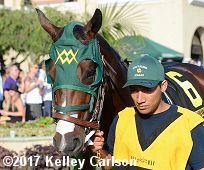 Left: Bolt d'Oro in the winner's circle. Winning owner-trainer Mick Ruis, celebrating his first Grade 1 victory as a trainer, said, "He got wiped out in the beginning, again. But this horse has so much talent. He can go to the front, he can come from the back. We were, what, six wide around the turn to take the lead. I had this horse maybe 70 percent cranked. I'll have him a little bit tighter for the Front Runner, so we're real excited about that. Then we'll see about the Breeders' Cup Juvenile) What does the sign say up front, Fifty Nine Days away?"

Right: Bolt d'Oro in the paddock. Winning jockey Corey Nakatani said, "I was pretty confident going into the race. I thought he was the horse to beat; that they'd have to pick their feet up to beat him. But he's a very talented colt; he's very classy. I knew I'd have to have some patience today; to just wait some. And it worked out. In the lane he was big. I have to thank Mick (trainer Mick Ruis). He gave me this shot and I'm glad it worked out." 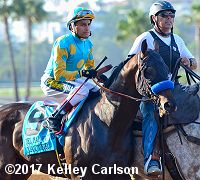 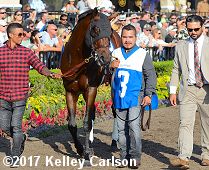 Left: Second place finisher Zatter post parade. Jockey Rafael Bejarano said, "I had a good position; right where I wanted to be. When we went for home, I asked him and he responded. He never stopped running. The winner was just too much today."

Right: Third place finisher and beaten favorite Run Away in the walking ring. Jockey Flavien Prat said, "I'm drawn inside, so I've got to go. No choice. I got going too fast, but what are you going to do. No real excuses for me. But I wish we would have been drawn outside. You might have seen a different result."


The final stakes race of the meeting is the $100,000 Del Mar Juvenile Fillies Turf Stakes for 2-year-old fillies going 1 mile on the Jimmy Durante turf course. Medaglia Gold was the 2-1 favorite in the full field of 14 off her maiden win at 3rd asking over this same course and distance last out, over 9-2 Navajo Dreamer, second in the Plusvital Speed Gene Nursery Handicap at the Curragh, and 6-1 Klosters, winner of the EBF Novice Stakes at Chepstow. 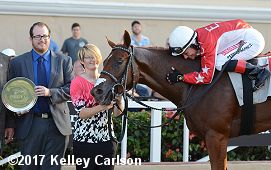 Terra's Angel in the winner's circle. Winning trainer Dallas Keen said, "Sasha told me she wanted to be laying there close and this has been her filly from day one. The filly runs good for her and it's a good matchup. We were having kind of a rough meet other than the third in the Sorrento (with Terra's Angel). This is a nice one to wind up with. We had a good meet."

Winning jockey Sasha Risenhoover, celebrating her first win at Del Mar, said, "This is so special. Words can't begin to tell. This is the most special race I've ever been involved in in my life. My first win in California; $100,000; I just don't know what to say. I've believed in this filly since day one. Knowing the story behind her (named for a mother of three in Texas who had brain cancer; she got to see this filly break her maiden and then died a few days later), it just put a fire in me. I wanted to win on her so much. She is so special. And so is this."


Kicking off the closing day stakes trio was the $75,000 C.E.R.F. Stakes for older fillies and mares sprinting 6 furlongs on the main track. Classy Tune, winner of her last 2 starts, was the even-money choice in the field of 8 over 3-1 Miss Sunset, winner of the Fleet Treat, and 15-4 Bad Ju Ju, 3rd in the Daisycutter Handicap.

34-1 Rockport Babe was quickest away through an opening quarter of 21.78 before Miss Sunset gained the lead on the far turn through a half in 44.80. Under confident handling by Mike Smith, Miss Sunset opened up a 2 length lead midstretch through 5f in 56.94, and easily held off Bad Ju Ju by 1 3/4 length in 1:09.82. It was another 1 1/4 length back to favorite Classy Tune third.

Miss Sunset in the winner's circle. Winning trainer Jeff Bonde said, "More time between races is better for her. It made a world of difference."