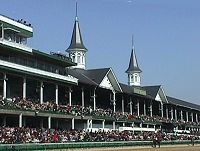 Using historical trends and the past performances for 12 of the top contenders for the Kentucky Derby, we have weighted many factors to develop the following ranked list. Each horse was given points for his conformation to a Derby winner's profile, and points were subtracted for negative aspects. Of course this does not guarantee that the horse with the most points will win, but it does give you a good idea who to eliminate from the winning position. It follows that if a horse doesn't fit the winner's profile, he may still finish in the money, much like how handicappers might bet anti-bias horses on the bottom of exotics. We also recommend checking workout patterns in the final week since these are a good indicator of who is ready. Preferably you're looking for horses that have at least two workouts over the Churchill Downs surface and at least one bullet work.

For more information on the trends and statistics used in this analysis, check out my article on Handicapping the Derby and the book Triple Crown Handicapper 2003 by Jim Mazur. There are slso a couple of older article you may find useful, one on angles from American Turf Monthly and a 10-step program from Kentucky Connect. Another useful article you may want to read is spped figure expert Joe Cardello's analysis of the top contenders Beyer Speed Figure patterns from DRF. This is the most over-analyzed race on the planet, so there are lots of trends and angles you can use.

Kafwain - He is the only dual qualifier left, has the proper running style, is trained by a successful Derby trainer, and is ridden by Derby winning jockey. He has not paired Beyer tops, meaning he is less susceptible to bounce at Churchill, but has a respectable 102 best Beyer in a route race. The only negative with him is that his pedigree is not considered suited for the distance, and despite his low dosage index he has no stamina points and has the fewest total points of the top contender. NOTE: Kafwain is out now with a strained tendon as of 4/29.

Empire Maker - The clear favorite does have some knocks against him. He only started twice as a 2-year-old, and his Beyers have been improving in five straight starts, increasing the likelihood of a bounce. Other than that, he looks great. With the potent combination of trainer Bobby Frankel and jockey Jerry Bailey, three starts at 9 furlongs this year (two wins and a second), a top Beyer of 111, and the preferred running style (closer), he is deserving of his favored status and if there's a Triple Crown in the making this is it. It was just revealed on 4/29 that he has been fighting a bruised foot since the Wood. He was examined by a vet and released to run in the Derby, but it still makes you wonder!

Buddy Gil - This contender is coming off a three race win streak but looking at his Beyer pattern, he hasn't paired top efforts, meaning he has already "regressed" and is primed to move forward. He has three-time Derby winning jockey Gary Stevens aboard but his trainer, Jeff Mullins, is making only his second trip to Churchill Downs. He already has the required bullet work at Churchill, a 1:11 4/5 on April 21st.

Offlee Wild - He barely squeaked by in a lot of the angles but you still don't get a really good feeling about him. The biggest knock against him is that his trainer is a first-timer at the Derby. His best Beyer is a 99 and has regressed slightly in his last three races. A triple digit Beyer is needed to win the Derby so he has to improve a lot to be the winner.

Ten Most Wanted - With only one start as a two year old, a loss in a maiden special weight, this puts him at a huge disadvantage. 3 to 4 starts at two are preferred to give a horse the proper foundation to handle the Derby. Worse still, his Beyers have increased in his last three starts, with the last two being career tops, with an 18-point improvement in his last race, putting him solidly in the bounce category. On the upside, he does have a Derby quality jockey and trainer and the preferred running style.

Sir Cherokee - He improved his Beyer by a whopping 26 points in his last two starts, earning a career top of 106 which puts him in the same "bouncing" boat as Ten Most Wanted. Both jockey and trainer are making their Derby debuts, a huge negative. His six starts at two can be considered excessive for a Derby winner these days. His only positive is that he rallies from off the pace, which is the preferred style to win at 1 1/4 miles at Churchill. Update: Sir Cherokee is now scratched due to a small fracture in his right rear leg suffered in a morning workout.

Peace Rules - Bobby Frankel's other horse has more knocks than his stablemate. Followers of the dosage index will immediately toss him because of his high index of 4.50, above the limit of 4.00, and his highest number is in the Brilliant wing rather than Classic. He was overraced at two (6 starts) and underraced at three (2 starts), although both of those starts at three were stakes wins at a route. His last two Beyers are 105 and 104, a slight regression making him less susceptible to bounce. His running style is pure speed, which, with the recent exception of War Emblem, is not the preferred way to go at the Derby. You can't ask for a better trainer, and although jockey Edgar Prado has not won a Derby, it is his fourth start in the event and he is a perennial leader in the national standings.

Brancusi - He had four starts as a two year old which is good, but did not break his maiden until his first start at three. His best Beyer is a 101, and he has run two sharp stakes performances. This will be trainer Patrick Biancone's first Derby, which is a disadvantage, but to make matters worse he is ridden by first time Derby jockey Tony Farina. His Beyers are fast enough to win, and his dosage satisfies the requirements of a Derby winner.

Funny Cide - He has the best dosage profile of any of the contenders, 7-2-11-3-1, with an index of 1.53, giving him the Classic peak in the middle and ample stamina points on the right wing. He was undefeated in three starts at two, with two stakes wins, but was limited to New York-bred competition. His big knock is that he is a speedster in a non speed-favoring race. Jockey Jose Santos has ridden in 6 Derbies but it's the first Derby start for trainer Barclay Tagg. His Beyers are progressing upward in three consecutive starts, his last a gain of 11 points, putting him squarely in the dreaded bounce category.

Scrimshaw - Despite no jockey being named as of yet, he does have a huge advantage being trained by 4-time Derby winner D. Wayne Lukas. He comes off the same trail as two other Lukas Derby entrants: 1999 winner Charismatic and 2002 runner-up Proud Citizen. However, he has the distinct disadvantage of having no races past 1 1/16 miles and his best Beyer in a route is a 99. He runs a stalking style which also is not preferred. His dosage profile is weighted too heavily towards Brilliant speed, despite his index being an acceptable 3.33.

Atswhatimtalknbout - A huge knock for this one is he was unraced at two. It is well known that no unraced two year old has won the Derby since 1882. The best an unraced two year old could accomplish in modern times was second in 1948 and 1994. His trainer Ron Ellis is making his Derby debut, another major knock. On the dosage front, he has no stamina points. However, he does have 15 Classic points, fast enough Beyers (top of 105 and with a slight regression in his last start), and the right running style.

Indian Express - With only four starts lifetime, two of them at three, he is too inexperienced to win the Derby. What's worse, only one of his starts was past 6 1/2 furlongs, his 2nd place finish in the Santa Anita Derby (Beyer 104). On the plus side, he has Bob Baffert as a trainer, but on the minus side he has Derby rookie Tyler Baze riding. The fact that he is a Utah-bred who raced in Panama at two is not very comforting either.

All of this analysis is strictly aimed at statistically identifying a potential Kentucky Derby winner. It has no bearing on whether the horse can finish second or third. Although the statistics used are historical facts, anti-profile horses can and do win the Derby as we saw with War Emblem last year. He was coming off a huge Beyer top (but didn't bounce) and won on the front end, by far the worst style to use in this race.