The last Grade 1 races of the Canadian racing season were run at Woodbine on Sunday, highlighted by the 79th renewal of the $1 million Pattison Canadian International (G1), featuring top older horses going 1 1/2 miles, 1 complete lap of the E.P. Taylor Turf Course. Rains in the morning and early in the card softened the course down to a GoingStick reading of 10.3 (good-to-firm), and it was unusually warm for mid October in Toronto with the temperature in the high 60's (20 C).

Idaho was sent off as the 7-5 favorite in the field of 9, winner of the Great Voltigeur (G3) at York after finishing a close second in the Irish Derby (G1) but unseated his jockey in the St. Leger (G1) last out at Doncaster. In to challenge him included 3-1 second choice Dartmouth, owned by Queen Elizabeth II and a close second in the Legacy Cup (G3) at Newbury after winning the Hardwicke (G2) and finishing third in the King George and Queen Elizabeth (G1) at Ascot, and 11-2 third choice Protectionist, winner of his last three starts including the Hansa Preis (G1) and the Grosser Preis von Berlin (G1), and was the Melbourne Cup (G1) winner back in 2014.

Jockey Julien Leparoux sent 13-1 World Approval to the lead first time by and he set fractions of 26.66, 52.79, 1:18.80, 1:44.21, and 2:08.01 over the good-to-firm going while pressed by Dartmouth and stalked by 9-1 The Pizza Man. Entering the stretch World Approval tired while 12-1 Erupt, who sat 3 lengths off the pace in fourth most of the way, moved out for room by and took over the lead at the 3/16 pole. Kept to task by regular rider Stephane Pasquier, Erupt outfinished Dartmouth for the 1 length victory clocked in 2:30.87. It was another 1/2 length back to 10-1 Wake Forest third, while favorite Idaho checked in 5th. 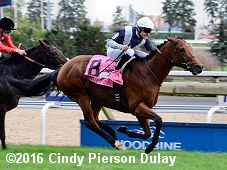 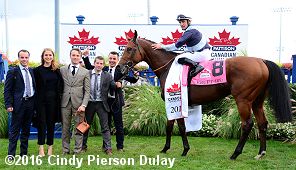 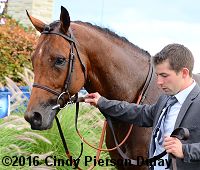 Left: Erupt in the winner's circle. Winning jockey Stephane Pasquier said, "I was right behind the leader and when I asked him, he gave a very good turn of foot. I didn't have to ask him so much. I was a bit worried about my draw number outside but voilŕ! When you have luck, it is easy to win. The trip was good. When you win it's always good. I was a bit worried about my stall number (Post 8), but he started well. We took good position right behind the leader and the race was perfect today."

Right: Erupt heads back to the barn. Electra Niarchos, niece of owner Maria Niarchos-Gouaze, said, "You travel the world hoping for the best," she said. "So when you come here you can only hope that luck will be on your side. We do this for a reason. We have to believe each time. Like all horses, you have bad luck and you have good luck. We were unlucky this year but now he's proven today he's back in himself." 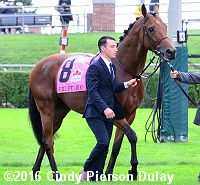 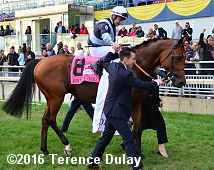 Left: Erupt in the paddock before the race. Asked about possibly going next in either the Breeders' Cup Turf or the Japan Cup, Niarchos added, "There are many options open. We'll take one thing at a time, we'll see how he is. After today, we have to consider a lot of options."

Right: Erupt parades for the fans after the race. Pasquier added, "I rode him every time. We won a Group 1 in France at three-years-old but it was a difficult start to this year. Today he came back very easily and I'm very happy to have found my horse again. It's like winning a World Cup. It's so difficult to find good horses and when you have one, to then keep him in a good way to be a top horse is very difficult. I'm proud to see him back today. It's my second ride in Canada and my first win. The turf course was very good. It feels so good." 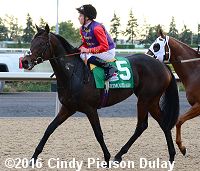 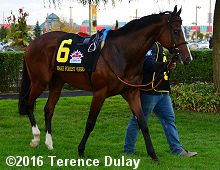 Left: Second place finsher Dartmouth returns after the race. Jockey William Buick said, "The trip was great. He ran good. The winner went off and won easy but he stuck on well for second. I'm delighted with the run, he did his best. He ran his heart out."

Right: Third place finisher Wake Forest in the paddock before the race. Jockey Javier Castellano said, "I had a great trip. I saved all the ground on the first turn and I'm very satisfied with how he did it today. We were third best today. At the top of the stretch when I asked him he responded but I have to give the winner a lot of credit. The winner just took off and he was much the best today." 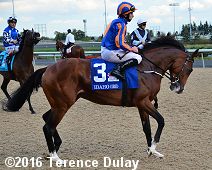 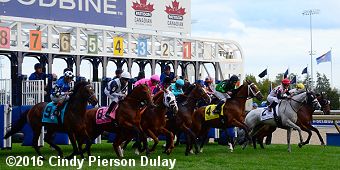 Left: Fifth place finisher and beaten favorite Idaho in the post parade. The 7-5 choice raced 7th about 5 lengths off the pace early under Ryan Moore, but failed to rally finishing 5th beaten 2 1/2 lengths. The Aidan O'Brien trainee has a record of 2 wins, 2 seconds, and 2 thirds in 9 starts, earning $743,699 for owners Michael Tabor, Susan Magnier, and Derrick Smith.

Right: The field breaks from the starting gate for the 79th running of the Canadian International.