The $500,000 Champagne Stakes (G1) features 2-year-olds going 1 mile around 1 turn of the main track in this "Win and You're In" qualifier for the Breeders' Cup Juvenile. Conditions were typical for early October on Long Island with cloudy skies and temperatures in the high 50's, with the main track fast and turf firm. Green Light Go was sent off as the 5-4 favorite in the field of 6, undefeated in 2 starts including the Saratoga Special (G2). In to challenge him included 7-5 second choice Tiz the Law, a debut winner at Saratoga on August 8, and 5-1 third choice Gozilla, 3rd in the Hopeful (G1).

Jockey Junion Alvarado sent Green Light Go to the front exiting the chute through fractions of 22.57, 46.15, and 1:10.82 while pressed by Gozilla and stalked by 39-1 Big City Bob. Entering the lane, jockey Manny Franco, 5th early aboard Tiz the Law after stumbling at the start, found room 3 wide to gain the lead midstretch through 7f in 1:23.11. Kept to task by Franco, Tuz the Law drew off late to win by 4 lengths in 1:35.41. It was a neck back to Big City Bob third. 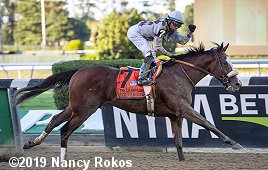 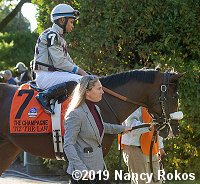 Left: Tiz the Law in the winner's circle. Winning trainer Barclay Tagg said,  "It was just what I wanted to see. Out of the gate, he bobbled badly. He out broke himself. Manny did a great job with him. He got him all the way back and saved some ground. You're taking a chance to jump into a big race like this in just his second start.I wanted to work him one more time before making a decision. He worked Wednesday and I liked what I saw. Jack [Knowlton, owner] is good about these things. (Breeders' Cup is) a little bit close and it's a long way away. We can always go to California another year, but we can only go to the Kentucky Derby one year."

Right: Tiz the Law heads out of the paddock. Jack Knowlton of ownership group Sackatoga Stable said, "In his debut, he was never asked for anything. He was inside, he split horses, had dirt in his face and that told us a lot and it paid off today. I didn't think he would have any dirt on him today. (Breeders' Cup is) highly unlikely for a lot of reasons. Shipping across the country with a young horse and going a mile and a sixteenth around two turns the first time against top competition. The Remsen is possible. Obviously we would like a 1 1/16 race, but we don't have one here. We'll talk about it. It certainly doesn't look like he has distance limitations so we'll figure it out." 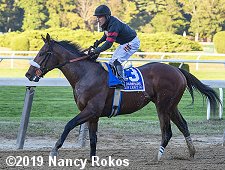 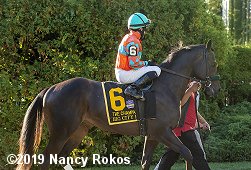 Left: Second place finisher and beaten favorite Green Light Go returns after the race. Jockey Junior Alvarado said,  "Just second best. He was in a nice rhythm. I thought he was very relaxed. Turning for home, I asked him for a run and he gave me his best. Just second best. I'm thinking the others were going to go. They broke right next to me. I waited for them to go. I got the lead without even asking."

Right: Third place finisher Big City Bob heads out of the paddock. Jockey Chris DeCarlo said, "He sure does try. The winner had so much horse that I couldn't keep him in. I was real proud of my horse the way he dug in to get third and almost second."

Jockey John Velazquez sent Channel Maker to the lead first time by and he set fractions of 25.14, 50.85, 1:16.13, and 1:40.31 while pressed by Sadler's Joy and stalked by Arklow. Turning for home, Arklow was sent up to challenge by jockey Junior Alvarado, gaining a short lead through 10f in 2:03.41. Channel Maker fought back to regain the lead midstretch but Arklow outfinished him in the final 1/16 to prevail by 1/2 a length in 2:27.34. It was a head back to Sadler's Joy third. 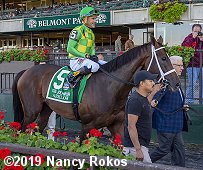 Left: Arklow in the winner's circle. Dustin Dugas, assistant to winning trainer Brad Cox said, "It's been a long journey to get there, but he finally got it done. He's had enough seconds in a row. He's a cool horse. He's a hard knocker for all of us. It's fun. They had him right. He shipped in from Kentucky. The guys in Kentucky did a great job with him. They had him on point and ready to run today."

Right: Arklow takes his walk down Victory Lane. Winning jockey Junior Alvarado said, "I just lost a little ground into the first turn but I never got in his way. I let him find his rhythm and he was there for me the whole way around. At the quarter pole, I thought I was going to start getting away from them the way he was moving and then he switched leads to the right and he kind of steadied. Channel Maker came back on me a little bit. I felt my horse trying, he never stopped. At the end, he showed his class and got through it." 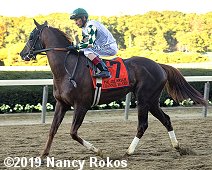 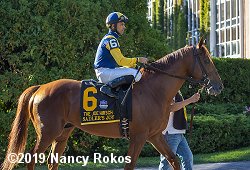 Left: Second place finisher Channel Maker returns after the race. Jockey John Velazquez said, "We went to the lead and he went for it. He dug in. It was a good effort."

Right: Third place finisher and beaten favorite Sadler's Joy heads out of the paddock. Jockey Jose Lezcano said, "We broke a little slow. I knew with no real pace in there I had to hustle to get position. The winner came next to me the whole way around. He had a ton of horse and we were only a neck short."


The $500,000 Hill Prince Stakes (G2) featured a field of nine 3-year-olds going 1 1/8 miles over the inner turf course. Saratoga Derby winner and Jockey Club Derby 4th place finisher A Thread of Blue was sent off as the 9-5 favorite over 7-2 Digital Age, winless since the American Turf (G2) and 8th in the Jockey Club Derby last out, and 5-1 Bourbon War, 2nd in the Better Talk Now Stakes after disappointing 10th in the Belmont Stakes (G1). 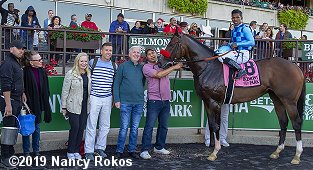 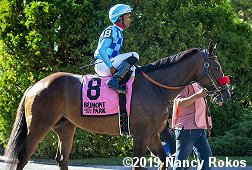 Left: Neptune's Storm in the winner's circle. Winning owner John Rochfort said, "After the last race, they changed things up and got the horse to relax a bit and it showed today. He just ran great. We took the blinkers off and trained him that way for a few weeks and he just ran a fantastic race today It was all the trainer. He said he was in great condition and we should take a shot at this and there wasn't really anything in California, so that's why we decided to come. (Breeders' Cup) Not this year. Hopefully in the future."

Right: Neptune's Storm heads out of the paddock. Winning jockey Ricardo Santana Jr. said, "I was just a passenger today. He put himself in a position that he wanted. That horse is so classy and he knows how to win. He did everything by himself, to be honest. Turning for home, I knew I had plenty of horse and I knew I just had to wait. This stretch is so long, so I knew I could wait until the right moment. He gave me a nice, strong kick and finish to get home." 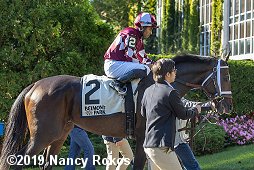 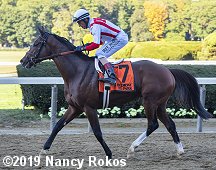 Left: Second place finisher and beaten favorite A Thread of Blue heads out of the paddock. Jockey Luis Saez said, "It was a perfect trip. He got beat, that's all. The distance was all right. It's horse racing. Today, he got beat. Hopefully, next time he'll be better. It was a nice trip. He was relaxed."


The $150,000 Matron Stakes (G3) featured a field of six 2-year-old fillies sprinting 6 furlongs on the inner turf. Debut winner Alms was sent off as the 3-5 favorite over 9-5 Karak, winner of the Tyro Stakes, and 11-1 Pure Wow, still winless after 2 starts against fellow maidens. 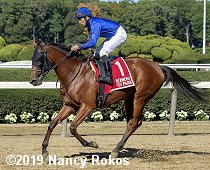 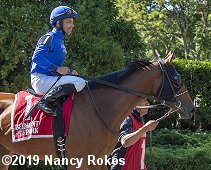 Left: Alms returns after the race. Ben Trask, assistant to winning trainer Mike Stidham said, "We've always been real high on this filly. We trained her sister [Hallie Belle] as well, who was a stakes winner and graded-placed. We ran her back a little quick, but we wanted to see what we had. She trains at Fair Hill on the synthetic track and she does everything right. At the break, I would have liked her to have been a little bit closer, but when she broke, she looked at the horses a little bit and then again on the turn. When she got outside, she finished well and came home nice."

Right: Alms heads out of the paddock. Winning jockey Jose Lezcano said, "At the three-eighths pole, I had to start asking her. She's still young and a little bit green. I wanted to ask her a little bit earlier because I know the turf is playing a little bit fast today and I didn't want to fall too far behind. Once I asked, she went on well to win the race. I think she can go longer."


The $150,000 Belmont Turf Sprint Invitational featured a field of 7 older horses sprinting 6 furlogs on the Widener turf. Lucky Coin Stakes winner Shekky Shebaz was the 8-5 favorite over 3-1 Final Frontier, 2nd in the Lucky Coin, and 7-2 Disco Partner, 3rd in the Lucky Coin after finishing 2nd in the Troy Stakes (G3)

Jockey Irad Ortiz Jr. sent Shekky Shebaz to the lead through fractions of 22.46 and 44.29 while pressed by 18-1 Fully Vested and stalked by Final Frontier. In the stretch Shekky Shebaz continued to lead through 5f in 55.51 but Final Frontier and jockey Jose Lezcano gained the lead at the 1/16 pole to win by 3/4 length in 1:07.39. It was another 1 1/2 lengths back to Fully Vested third. 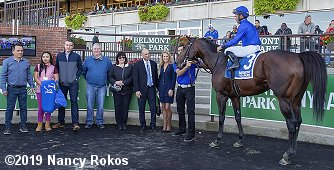 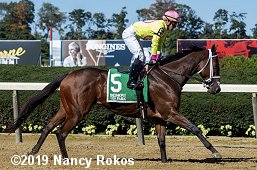 Left: Final Frontier in the winner's circle. Winning trainer Tom Albertrani said, "5 1/2 furlongs is just a little too short because he has the stamina to go a little bit longer. He showed that he can win at a mile in the past but since we shortened him up it's really made a different horse out of him. He's a much better sprinter. It is a concern. I thought about that, but it is the Breeders' Cup. Might have to take a shot in there" Winning jockey Jose Lezcano said, "He broke real good today. He was right there. The two horses [Shekky Shebaz and Fully Vested] were going head to head, and I was sitting third outside of them. When I asked him, he gave me a really good race. He finished really well. Three-quarters (of a mile) is easier for him. He gets a breather and doesn't lose as much ground early. Today, he broke so well, and when I asked him, he took off and went for home."