The $500,000 Champagne Stakes (G1) features 2-year-olds going 1 mile around 1 turn of the main track in this "Win and You're In" qualifier for the Breeders' Cup Juvenile. Conditions were typical for early October on Long Island with overcast skies and temperatures in the high 60's, with the main track fast and turf good. Saratoga debut winner on September 3, Complexity was sent off as the 5-2 favorite in the field of 10. In to challenge him included 7-2 second choice Trophy Chaser, a maiden winner at second asking at Gulfstream, and 4-1 third choice Endorsed, off his debut win at Saratoga on August 18.

Jockey Jose Ortiz sent favorite Complexity to the lead exiting the chute through fractions of 22.51, 45.31, and 1:09.40 while pressed by 33-1 Achilles Warrior and stalked by 13-2 Call Paul. Entering the stretch, Complexity opened up on the field, gaining a 5 length lead on late-running Code of Honor through 7f in 1:21.69. Complexity cruised the rest of the way to win by 3 lengths in 1:34.63. It was another 3 lengths back to Call Paul third. 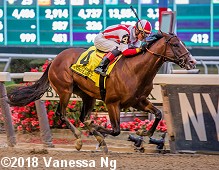 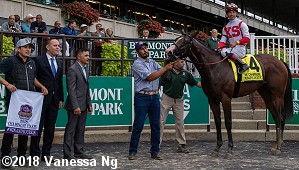 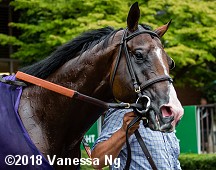 Left: Complexity in the winner's circle. Winning trainer Chad Brown said, "He's just so strong. An outstanding talent. He's just a rare horse. The horse ran outstanding, just a remarkable talent. To carry those fractions all the way through the mile was impressive. Jose came back and with his report and said, 'Boss, I thought I was going 47 and change, that's how easy he was moving.' He had enough to kick on. Obviously, we're going to the Breeders' Cup if he comes back sound and healthy. We'll try and run two turns, which will be another question mark. It's another sixteenth of a mile, but he's a class horse. Jose gets along with him well, and hopefully he'll get a good trip in this race."

Right: Complexity heads back to the barn. Winning jockey Jose Ortiz said, "We broke on top and went right to the lead, and he went fast and easy. I thought I was going, 23, 46 and 4, 47. When I came back, I couldn't believe he went 22 and 45. 1:34 is a very respectable time for these babies. We have to talk about him now. He won a Grade 1 with the best two-year-olds we have in New York, and now we have to go compete in the Breeders' Cup with the ones in California and Kentucky and everywhere else. The way he did it was very easy and we're happy with his performance. When I passed the 3/8 pole, I was looking for competition. He was so relaxed. He just galloped today. 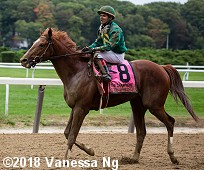 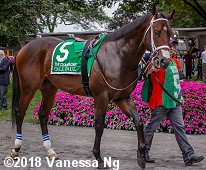 Left: Second place finisher Code of Honor returns after the race. Trainer Shug McGaughey said, "I thought for a young two-year-old, he ran a great race. He stumbled so bad at the start, so for him to be back where he was, eat dirt, and then to make that big run wide, so I'm pleased with the effort. I'm not sure (about Breeders' Cup). This year, it's in Louisville, so that might make a difference. You've also got the Nashua at one turn right around Breeders' Cup time and the Remsen going around two turns. I wouldn't mind running straight into the Remsen. Going 1 1/8, if he gets away good, I think they might all be trying to catch him."


The $500,000 Hill Prince Stakes (G2) featured a field of seven 3-year-olds going 1 1/8 miles over the inner turf course. Hall of Fame (G2) and Saranac (G3) winner Raging Bull was sent off as the 2-5 favorite. In to challenge him included 4-1 second choice March to the Arch, 3rd in the Saranac after winning the Toronto Cup at Woodbine, and 10-1 third choice Cullum Road, 2nd in the Dueling Grounds Derby at Kentucky Downs. 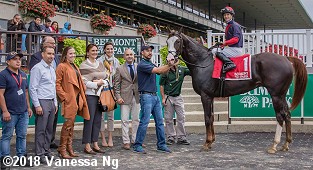 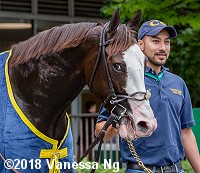 Left: Have At It in the winner's circle. Winning trainer Christophe Clement said, "He's always been a nice horse. It took us a while to figure him out. Every time he's been ridden forwardly this year, he's run very well. Every time he's been taken back he's run disappointingly. His race in Saratoga was a good race. He probably should have run with a better trip. His allowance race here as well was a very good race as well and today he ran great. I was a little bit worried on the turn that the horse on the lead got loose and we couldn't catch him, but he really quickened and got there so it's a lot of fun.

Right: Have At It heads back to the barn after the race. Winning jockey David Cohen said,  "He broke sharp. Our plan was to get him into the race, but if someone wanted to go, we'd just sit back like we did. He's a horse that doesn't have a huge turn of foot, but definitely will stay for you. So, I got him rolling early and was able to save ground the whole way around, and he kicked on and fought on very strong. I wasn't really worried about anyone else - my horse was traveling so well. Anytime, I asked him, he was there for me. I was pretty much in my own zone and not worried about anyone else. 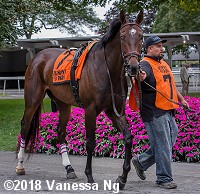 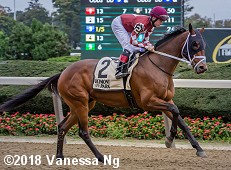 Left: Second place finisher Sand Dancer in the paddock before the race. The Timothy Hills trainee improved his record to 3 wins, 3 seconds, and 1 third in 11 starts, earning $245,054 for owner-breeder Sea Gull Capital. 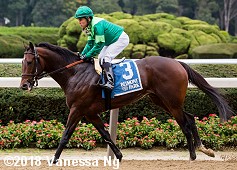