Belmont Park hosted 4 stakes races on Saturday afternoon, two of which are Breeders' Cup Challenge "Win and You're In" qualifiers in the 2-year-old dirt divisions. Conditions were excellent for early October, with partly cloudy skies and temperatures in the mid 70's at the historic Long Island facility, with a fast main track and the turf courses rated firm.

The $500,000 Champagne Stakes (G1) features 2-year-olds going 1 mile around 1 turn of the main track in this "Win and You're In" qualifier for the Breeders' Cup Juvenile. Aneenu Malcainu was sent off as the 3-1 favorite in the field of 12, undefeated in 2 starts including the Funny Cide Stakes last out. In to challenge him included 4-1 second choice Good Magic, 2nd in his debut at Saratoga, and 5-1 third choice Honorable Treasure, a maiden winner at second asking.

Jockey Luis Saez sent favorite Aveenu Malcainu to the lead exiting the chute through fractions of 22.90, 45.94, and 1:10.37 while pressed by Honorable Treasure and stalked by 11-2 fourth choice Hazit. Entering the lane Aveenu Malcainu tired as Good Magic, 6th early, moved up 4 wide to lead through 7f in 1:22.90. 11-1 Firenze Fire, 10th early under Irad Ortiz Jr., came out 5 wide into the lane and rallied to win by 1/2 a length in 1:35.91 over the fast main track. It was another 3 lengths back to 7-1 Enticed third, while Aveenu Malcainu checked in 7th.

Check out the other races on the card: The Jockey Club Gold Cup and Hill Prince Stakes. 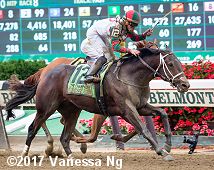 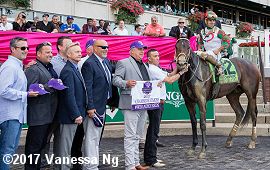 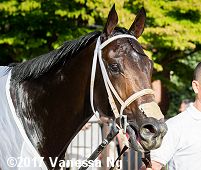 Left: Firenze Fire in the winner's circle. Winning trainer Jason Servis said, "What can I say? A Grade 1 homebred. We claimed the mare, she was no good, so we put her in the barn for two years, and then Ron (owner Lombardi) decided to breed her and he we are. It's a good story. I was really surprised on the turn. Irad was loaded. It looked like he was going to get there, but even Irad said he was loaded. He wasn't right that day (fourth in the Hopeful). He had a virus or something going on. He changed leads today."

Right: Firenze Fire heads back to the barn. Winning jockey Irad Ortiz Jr. said, "He broke in front but I took him back like the way we've been working him and it worked out perfect for us. When I asked him, he exploded. He responded very good. Past the three-eighths pole, I still had some horse and he hadn't moved yet. He's been working good so I knew when I asked him, he was going to be there for me. Then I saw (Good Magic) turning for home and I said, 'We've got to go because they're good horses and I knew he was going to bring something for me in the end. I couldn't wait any more." 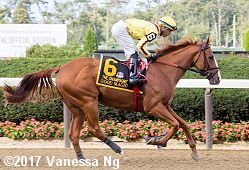 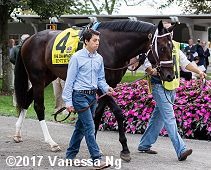 Left: Second place finisher Good Magic in the post parade. Trainer Chad Brown said, "He just got beat. I thought he ran very well especially for a maiden. It's the first time he's seen dirt in his face, probably going to learn a lot from that, he just ran second best again. I thought we had a big shot. That horse came and got us, we were well clear of third so it says something about how well both first and second place finishers ran." 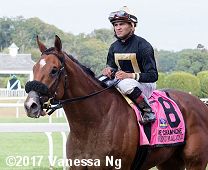 Seventh place finisher and beaten favorite Aveenu Malcainu returns after the race. The Jeremiah Englehart trainee has a record of 2 wins, 0 seconds, and 0 thirds in 3 starts, earning $165,229 for owner Gold Square LLC.


Kicking off the weekend stakes action, the $150,000 Belmont Turf Sprint Invitational featured a field of 5 older horses sprinting 6 furongs on the Widener turf course. Jaipur (G3) winner Disco Partner was sent off as the 3-10 favorite over 3-1 We Deer You, winner of the Lucky Coin Stakes, and 9-1 Ready for Rye, 6th in the Alfred G. Vanderbilt (G1). 17-1 longest shot Bold Thunder was quickest away through fractions of 22.06 and 44.59 over the firm going while pressed by Ready for Rye and stalked by 10-1 Snowday. In the stretch, Bold Thunder tired allowing Ready for Rye to inherit the lead through 5/8 in 55.74. Disco Partner, 4th early under Irad Ortiz Jr., came out 4 wide for room and rallied to win going away by 1 1/4 lengths in 1:06.97, just 1/10 second off the course record. It was a neck back to Snowday third. 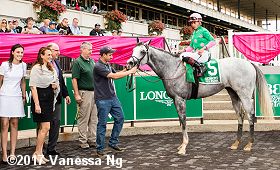 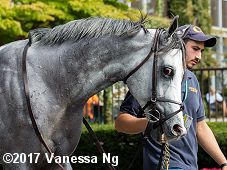 Left: Disco Partner in the winner's circle. Winning trainer Christophe Clement said, "He's 4-for-4 this year at Belmont, he's a top-class horse. It was like a morning workout for him. As a trainer, I don't control the (fractions). As long as he comes back safe, I'm very happy with it. I'm very lucky I have two top-class sprinters. We won the race at Parx with Pure Sensation and he [Disco Partner] wins here. So, they can make the decision on who goes to the Breeders' Cup. That'll be up to Mr. and Mrs. Generazio. It's a great problem to have. If they want, I'll take both of them. One has more natural speed [Pure Sensation], this one has the most amazing turn of foot. In three strides, he can just get there. Maybe it's a good team to run together."

Right: Disco Partner heads back to the barn after the race. Winning jockey Irad Ortiz Jr. said, "I knew the speed was going to come back to me, so I just followed (Ready for Rye) and I knew he was good to follow, because he was going to bring me to the quarter-pole and Bold Thunder, six furlongs sometimes a little too far for him, so I just tried to wait as long as I can and tried not to move too early. He's a nice horse. He gives me a nice kick. He probably wasn't as fast today as he was (in the Jaipur), but he is still a nice horse. I think he is one of the best sprinters around right now." 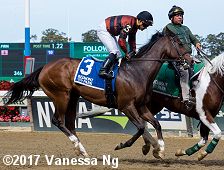 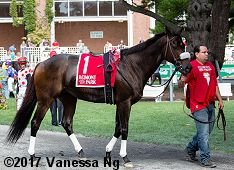 Left: Second place finisher Ready for Rye in the post parade. Dan Stupp, assistant to trainer Tom Albertrani said, "He ran really well. He always tries, he always gives the effort. He got his ideal position. He wants that stalking trip sitting right off the speed. Everything worked out to plan, just second best. The winner is just a really nice horse and he got outrun. No excuses. Disco Partner was much the best today."

Right: Third place finisher Snowday in the paddock before the race. He has a record of 6 wins, 9 seconds, and 6 thirds in 35 starts, earning $430,192 for owner-trainer J. Willard Thompson.