Santa Anita hosted six stakes races on Saturday, five of which are part of the California Cup series, restricted to California-foaled or sired horses. Conditions were excellent at the historic Arcadia oval with sunny skies and temperatures in the low 80's for the 11,052 in attendance. Kicking off the stakes action was the only graded event on the card, as a field of six older fillies and mares sprinted 7 furlongs in the $200,000 Santa Monica Stakes (G2). Defending champion Teddy's Promise was sent off as the 7-5 favorite off her win in the Playa Del Rey Stakes at Hollywood. In to challenge her included 5-2 second choice Heir Kitty, winner of the La Brea (G1) last out at Santa Anita, and 4-1 third choice Scherzinger off an allowance win and making her stakes debut here.

Scherzinger was quickest out of the chute and got the opening quarter in 23.00 before jockey Mike Smith allowed her to settle in thid as Teddy's Promise took over through a half in 45.48. Teddy's Promise opened up a 1 1/2 length lead at the 1/8 pole through 3/4 in 1:09.36, but Scherzinger came through on the inside to win by a length over late-running 9-2 Iotapa in 1:22.00 over the fast main track. It was another 1/2 length back to favorite Teddy's Promise third. 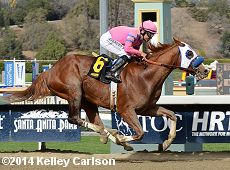 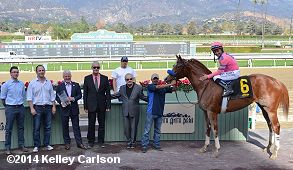 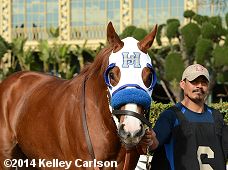 Left: Scherzinger in the winner's circle. Winning trainer Jerry Hollendorfer said, "It was a great job by Mike Smith. We didn't really expect to be out on the front end, but he used his own judgment and that's fine with us. We talked it over with Mike and he thought she deserved a shot to run the 7 furlongs. We didn't know if we could beat Teddy's Promise, but we got lucky, got through, and beat her."

Right: Scherzinger in the paddock. Jockey Mike Smith said, "Just a little bit of race-riding today. I used her early and got her up there to make Victor (Espinoza, on Teddy's Promise) to either use his filly or make her take back, one or the other and he chose to take back, which was good for us. When he went to the outside they made a little move on me, which I also thought was good for us because I really like 7/8 for this filly, she has a big long stride and just keeps coming and coming; she just wore 'em down today. She was content. They kind of came over on me on the far turn, but it was more me just trying to get back out of there. I didn't want to stay stuck down in there for long; it was tight. She went right back into a relaxed mode though and when I called on her she jumped right through." 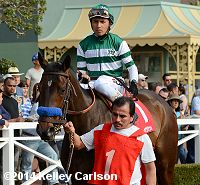 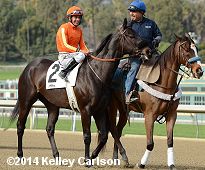 Left: Second place finisher Iotapa in the paddock before the race. Jockey Rafael Bejarano said, "My horse broke good. I was worried a little bit about the other horse, the winner. He was coming running from behind, too. When I saw he broke on the lead, for a moment, I wasn't worried about it. But when I saw he was kicking back, I knew he was going to have something left in the end. That's why I was worried."

Right: Third place finisher and beaten favorite Teddy's Promise in the post parade. Jockey Victor Espinoza said, "The race set up a little bit difficult for me out of the gate. The other horse broke faster than me and I got stuck on the inside. I didn't want to go head and head with the other horse so I started to use up my horse a little bit to move to the outside. After I was doing that (Heir Kitty) put pressure on me right away so at that point I had to just let her go a little bit. I used her earlier than I wanted and she flattened out on me at the end." 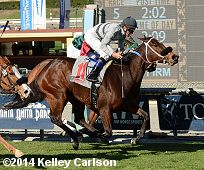 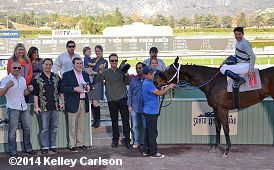 The first restricted stakes of the day was the $125,000 Sunshine Millions Filly and Mare Turf Sprint for California-sired or foaled older fillies and mares sprinting 6 1/2 furlongs from the downhill turf chute. Unusual Hottie was sent off as the 3-1 favorite in the field of 11 over 7-2 This Means War and 5-1 Ciao Bella Luna.

9-1 Marks Mine battled for the lead with Ciao Bella Luna down the hill through an opening quarter of 22.45 and a half in 44.59. Entering the stretch, Ciao Bella Luna poked her her in front through 3/4 in 1:06.80 and held her lead to the line to prevail by 1/2 a length in 1:12.81 over the firm course. It was just a head back to 10-1 ribal Spy, and another 1 1/4 lengths back to favorite Unusual Hottie fourth.
Results Chart

Winning trainer Peter Miller said, "We bought her to be a synthetic horse and we thought maybe the turf (would suit her). She ran well last time when we prepped her in the Monrovia. This was the logical spot to come back and she ran super." Jockey Kent Desormeaux added, |I thought we would be way back. She broke horrible her last out so the only thing I did differently was I asked her to leave there better. She carried me the rest of the way. She was in the bridle, just really floating along. (Marks Mine) jumped over the dirt and stumbled pretty good and I pitched a half (length) on them in a second. That might have been the winning move. I got that neck in front and when I asked her, we just took off." 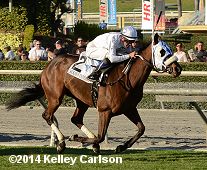 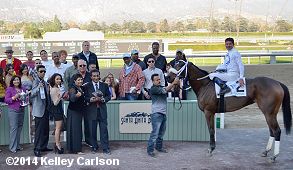 Winning jockey Kent Desormeaux said, "It's so great to be back in California, especially on Cal-Cup day. We picked this day to come back. The fans make it feel like Breeders' Cup, I can't believe the people here. Jorge told me exactly how to ride this filly and obviously it worked out. She's a very nice filly." Trainer Jorge Periban, celebrating his first U.S. stakes win, added, "I had a lot of confidence in her because she's a full sister to Oscillator. I knew this filly could run on the grass. I told Kent Desormeaux the filly had speed. If you put her in a good position, like second to fourth, you'll be in good shape, because there's a lot of traffic." 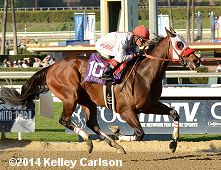 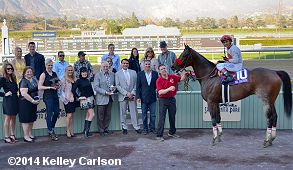 Winning jockey Rafael Bejarano said, "I thought a few other horses were going to the lead today. Cyclometer didn't break well so I found my position, I followed the speed and my horse was flying at the end." Trainer Richard Baltas added, "Rafael said he was going to sit far back, but I told him that if he breaks sharp not to be too far out of it. I think that's where he likes to be, up close, and he still can kick when he's up close. He just came into the race real good and it was a great day." 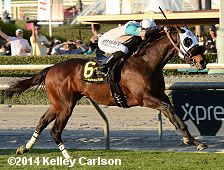 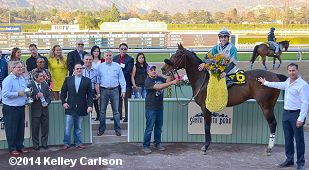 The $250,000 California Cup Turf Classic saw a full field of 14 older horses go 1 1/8 miles on the turf. 6-5 favorite Summer Hit contested the early pace with 31-1 Lucky Primo through fractions of 23.45, 46.88, and 1:10.28 over the firm course while stalked by 21-1 Weewinnin and 9-1 China Prince. Into the stretch the pacesetters tired allowing Weewinnin to inherit a short lead through 1 mile in 1:34.34. 10-1 Stoney Fleece put in a strong rally from 7th but Weewinnin cruised under the line 2 1/4 lengths ahead to win in 1:46.00. It was just a neck back from Stoney Fleece to 9-2 second choice Jules Journey third, who nosed out 9-1 Huntsville in fourth. Favorite Summer Hit faded to finish ninth.
Results Chart

Winning trainer Brian Koriner said, "It looked like all day people haven't been coming from very far off the pace and we just stayed close. But leaving the gates, Joe could have made a decision to let him run outside but he tucked him in and he relaxed after that and it was a great trip from there on in." Jockey Joe Talamo added, "I had a perfect trip. I was able to sit right behind a couple of horses and I was hoping if Summer Hit got tired he would move off the rail a bit and it worked out. When he got tired at the 1/4 pole he moved off the rail about a length. I was able to shoot right through there. My horse just kept opening up and he ran a great race." 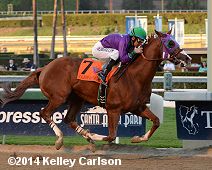 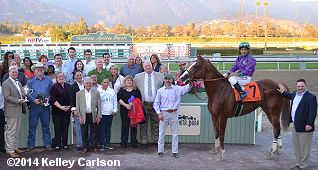 Closing out the stakes action on California Cup day, a field of 10 three-year-olds contested the $250,000 California Cup Derby at 1 1/16 miles on the main track. 36-1 longest shot Better Bet was allowed an uncontested lead of as many as 2 lengths through fractions of 23.47, 47.47, and 1:11.95, with 10-1 third choice Life is a Joy and 5-2 second choice California Chrome battling for second. Into the lane, Better Bet tired while California Chrome took command, quickly opening up a 5 length advantage through 1 mile in 1:36.73. 9-5 favorite Tamarando, 8th early, rallied well 4 wide into the stretch but was much too late as California Chrome finished 5 1/2 lengths ahead in 1:43.22. It was another 3 1/4 lengths back to Life is a Joy third.
Results Chart

Winning trainer Art Sherman said, "I had a perfect trip. I was able to sit right behind a couple of horses and I was hoping if Summer Hit got tired he would move off the rail a bit and it worked out. When he got tired at the 1/4 pole he moved off the rail about a length. I was able to shoot right through there. My horse just kept opening up and he ran a great race." Jockey Victor Espinoza added, "I know he's doing great but it was his first time at two turns. We wanted to find out if he could go that far and today, he showed he can go the distance. He did it easy. I had to tap him once though just so he kept going because he waits for other horses. I told Art I wanted to put him in the race; you have to let good horses run. I didn't want to take a hold or anything, I wanted him to be happy."