The feature race at Del Mar on Saturday was the $300,000 Bing Crosby Stakes (G1) for older horses sprinting 6 furlongs on the main track and is a Breeders' Cup Challenge "Win and You're In" qualifier for the Sprint. Conditions were excellent with clear skies and temperatures in the mid 70's, with the main track fast and the Jimmy Durante turf course firm. Breeders' Cup Sprint (G1) winner Roy H was sent off as the 6-5 favorite in the field of 11 off his 3rd place finish in the Dubai Golden Shaheen (G1) after winning the Palos Verdes (G2). In to challenge him included 3-1 second choice American Anthem, winner of the San Carlos (G2), and 9-2 third choice Ransom the Moon, winless since last year's edition and 5th in the Metropolitan Handicap (G1) last out.

19-1 St. Joe Bay and 7-1 fourth choice American Pastime dueled for the lead exiting the chute through opening fractions of 21.93 and 44.78 while stalked by 22-1 Touching Rainbows and Roy H. Entering the stretch, St. Joe Bay continued to lead through 5f in 57.39 before tiring. Ransom the Moon, 9th early, came out 5 wide under Flavien Prat and, despite Prat losing his whip at the 1/16 pole, rallied to win going away by 2 1/4 lengths over Roy H in 1:10.08. It was another 1/2 length back to Touching Rainbows third. 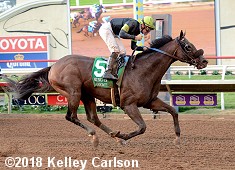 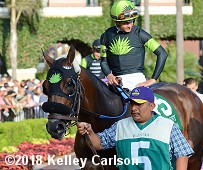 Left: Ransom the Moon in the winner's circle. Winning jockey Flavien Prat said, "I was thinking I was riding this horse up too close. I might have been taking his kick away from him. So today I went a different way. We had a big field and I knew there would be some pace, so I sat back with him. Then he came running. I had a lot of horse." Prat is one of only 3 riders to win the same Del Mar stakes race 4 years in a row, the others are Bill Shoemaker and Chris McCarron.

Right: Ransom the Moon in the paddock. Winning trainer Phil D'Amato said, "This horse beat this field on the square. Roy H is a great horse, hats off to him. But my horse, since I gave him a freshening awhile back he has kind of become the horse of old. I was more focused on (stablemate and third-place finisher) Touching Rainbows as the race developed, because he was in (contention) but then I saw Flavien tip Ransom the Moon out and saw them steadily pick up speed. By the time they hit the top of the lane I thought Ransom the Moon was going to run them down." 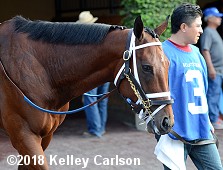 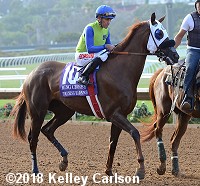 Left: Second place finisher and beaten favorite Roy H in the paddock. Jockey Kent Desormeaux said, "He's been off a while, so he might have needed this one. The boss (trainer Peter Miller) will go over him real well and get it figured out."

Right: Third place finisher Touching Rainbows in the post parade. Jockey Gary Stevens said, "I caught a flyer out of there and he was in a comfortable spot. Turning for home I thought I might even win it. Unfortunately, the oil light came on about the sixteenth pole." 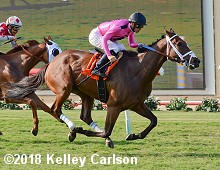 An hour before the Bing Crosby, a field of 11 California-bred/sired older horses contested the $150,000 California Dreamin' Stakes over 1 1/16 miles on the turf. 2-1 favorite Pee Wee Reese set the pace of 22.86, 46.12, and 1:10.16 under Joe Talamo while pressed by 9-2 second choice Fly to Mars. Entering the lane Pee Wee Reese tired as Fly to Mars gained the lead. Kept to task by Flavien Prat, Fly to Mars held off late-running 12-1 Grecian Fire by a length in a new course record time of 1:39.50. It was another 1/2 length back to 8-1 B Squared third, while favorite and pacesetter Pee Wee Reese checked in 7th.

Winning trainer Peter Miller said, "The horse has really gotten good in the past two months, since we took the blinkers off and have been getting him to relax. I've got to say Flavien (Prat) rode an unbelievable race. The pace was good, but it wasn't crazy and he really kicked home. To set a track record here is something. I thought he could win the race. To break the track record? That's something you never think about." 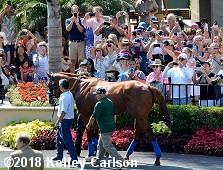 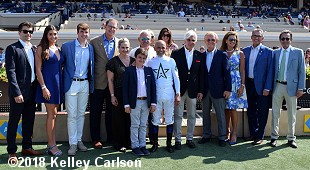 Justify made his final public appearance after being retired earlier this week between the 4th and 5th races at Del Mar Saturday. Many fans showed up to get a last photo and many of his connetions posed in the winner's circle afterwards. You can view lots more photos from this event here 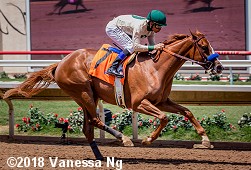 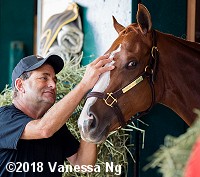 In the first race, Chasing Yesterday, the 2-year-old half sister to 2015 Triple Crown winner American Pharoah, made her debut for trainer Bob Baffert and owner Summer Wind Equine in a 5 1/2 furlong $60,000 maiden special weight. Under Mike Smith, Chasing Yesterday pressed pacesetter Honeyfromthesouth through fractions of 21.88 and 45.34, then took over at the 3/16 pole and won going away by 4 1/4 lengths in 1:04.44 as the 3-10 favorite.

Chasing Yesterday is by Tapit out of Littleprincessemma. Baffert said, "She's a different type. She's slighter made, and I see a lot of Tapit in her. But she's got a mind like Pharoah. She's very intelligent. This filly definitely wants to go longer and I just like the way she laid off that filly really nice, and he asked her to go." Smith added, "She felt like she looked. I even took a look at the (big screen on the infield) and said, 'Wow.' She's just so professional. You know Bob. He's just brilliant at getting them ready." She may go next in the Del Mar Debutante (G1) on September 1. She was named by owner-breeder Jane Lyon, whose husband fell very sick in 2015. When she asked the doctor for an update on his condition and hoping for good news, the doctor replied "Well, we're chasing yesterday."