The filly counterpart to the Preakness is the $300,000 Black-Eyed Susan Stakes (G2) held on the Friday before Preakness day. The 32,473 in attendance enjoyed a sunny day with temperatures in the 80's. A field of 9 three-year-old fillies went to post in this 1 1/8 mile trip over the main track at Pimlico Race Course in Baltimore, with Fantasy Stakes (G2) winner Mamma Kimbo sent off as the even-money favorite over 3-1 second choice Welcome Guest, second in the Comely (G3) last out, and 7-2 third choice In Lingerie, off her win in the Bourbonette Oaks (G3). 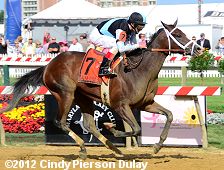 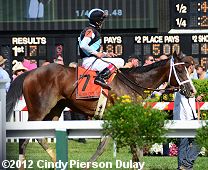 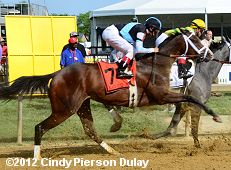 Left: In Lingerie circles after winning the Black-Eyed Susan. Winning trainer Todd Pletcher said, "We were pretty concerned at the start because one of the things Johnny and I talked about in the paddock was that she might have to make a wide sweep. It took her a little while to settle into stride and Johnny had no choice but to put her out pretty wide on the backside. I thought at the top of the stretch she was in pretty good shape, and she made a strong run in the stretch. I felt pretty comfortable coming to the sixteenth-pole. I think she made a big step forward to be one of the leaders of her division today."

Right: In Lingerie leads first time by. You can already see her front left foot is bleeding after her stumble at the start. Pletcher said she nicked a blood vessel in her pastern when she stumbled out of the gate, adding, "She's fine." 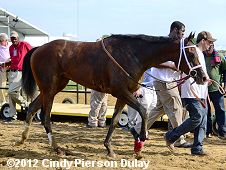 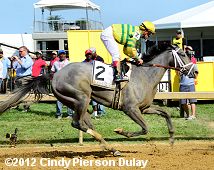 Left: In Lingerie heads back to the barn with her bloody front foot wrapped in a bandage. Winning jockey John Velazquez said, "She stumbled there, but she got a good position in the first turn. I just wanted to get good position into the first turn, and we did and after that it was pretty easy for us."

Right: Second place finisher Disposablepleasure runs out at the finish. Her trainer Todd Pletcher said, "I thought she ran a huge race. She kind of got squeezed a little bit at the top of the stretch, but she kept running and gave a real good account of herself. She ran more than a respectable race. She finally ran the way we expected her to all winter." 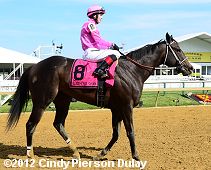 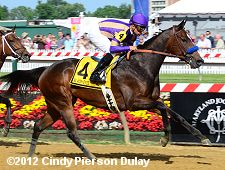 Left: Third place finisher Wildcat's Smile returns after the race. Her jockey Javier Castellano said, "I saved ground. I had a beautiful trip, but I had to wait at the quarter pole. I had to go around and lost momentum. I should have won the race. I had the best in there."

Right: Fourth place finisher and beaten favorite Mamma Kimbo leads first time by. Trainer Bob Baffert said, "It's a little far for her. She was trying, but it's just too far. She can get it with the right conditions. I knew it was a little bit beyond her limitations. She's a good filly and I'd like to keep her a little bit shorter." Jockey Mike Smith added, "She broke well and was well within herself early. Things were going OK early but it just wasn't our day. I guess it wasn't a good trip." 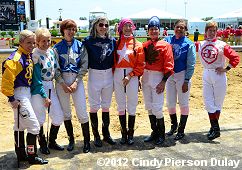 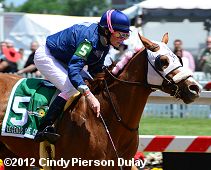 The Legends for the Cure race, a typical $45,000 allowance for older horses going 6 furlongs on the main track, featured 8 retired female jockeys coming back to raise money for Susan G. Komen for the Cure. Left: All the jockeys for the Lady Legends. From left to right, they are Zoe Cadman, P.J. Cooksey, Jill Jellison, Jennifer Rowland Small, Barbara Jo Rubin, Mary Russ-Tortora, Cheryl White, Mary Wiley-Wagner.

Right: Jennifer Rowland Small wins aboard 7-2 second choice Class Rules. She sent her mount to a clear lead immediately, opened up my 4 lengths at the 1/8 pole, and cruised past the post 2 1/4 lengths ahead of Mary Tortora aboard 6-5 favorite Bellagio, in 1:12.50. Mary Wiley aboard 5-1 Fleeter checked in third.
Full results chart from DRF

Jennifer Rowland Small said, "I started riding in 1971 as a way of paying my tuition at the Maryland Institute College of Art. I got up at 3, came here and got on horses, and then had to be at my first class at 9:30. I think this race was good because we've all had help in our lives, and I think it's a good way to pay back the community. The horse ran great, and you can't ask for any more than that. It takes a lot of work, and people take for granted how fit jockeys are or aren't." 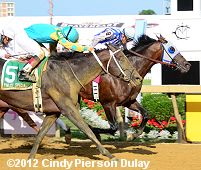 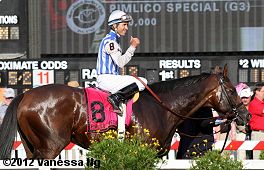 This year saw the return of the $300,000 Pimlico Special (G3) after a three-year absence. A field of 9 older horses contested this historic 1 3/16 mile trip, with Donn Handicap (G1) and New Orleans Handicap (G2) runner-up Mission Impazible sent off as the 5-2 favorite over 4-1 Alternation, winner of the Razorback (G3) and Oaklawn (G2) Handicaps, and 9-2 third choice Hymn Book, fourth in the Oaklawn Handicap after winning the Donn. Jockey Martin Garcia sent 8-1 Endorsement to the lead and he got fractions of 23.60, 46.88, and 1:10.73 while as many as 3 lengths in front of 9-1 Yawanna Twist. Into the stretch, Endorement continued to lead getting 1 mile in 1:36.72, but in the final furlong, Alternation, 3rd early, came through to win by a nose over fast-closing 6-1 Nehro in 1:57.60. It was another length back to Endorsement third, while favorite Mission Impazible was third.

Winning trainer Donnie Von Hemel said, "It was a head-bob. The other horse ran a nice race. It was just one of those where he fought long enough to get the job done. All the superlatives you want to use, he's that kind of horse. He's a top horse, and I think he's in the process of proving that right now. He's top of the list. I really thought the first time by the grandstand, they were going a little slower than that. When they put up the 23-and-3 and we were starting to ease off the pace a little, and the 46-and-change and we were 3-4 back, I felt like we were probably in a good enough spot at that point. Then everybody kind of bunched up at the 1/4 pole turning for home, and it was a real horse race."

Jockey Luis Quinonez added, "Everything went great, especially when you get there first. There were a couple horses making the pace. We put him where he was comfortable and we waited them out and rode hard to the wire."
Full results chart from DRF 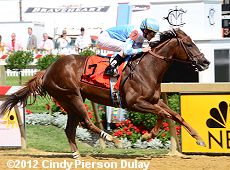 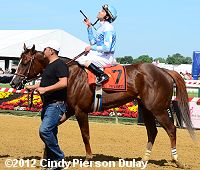 Her trainer Rudy Rodriguez said, "We felt very confident coming in. She's very, very special. I was not worried about any of these horses. But I know in the future there are bigger races and deeper fields coming. We are just trying to get her ready for those bigger races. She just keeps improving." Jockey Ramon Dominguez added, "She broke sharp and put herself in front. She just kept opening up. I had a strong hold on her and then I just tapped her on the shoulder a couple of times and there was no stopping her."
Full results chart from DRF 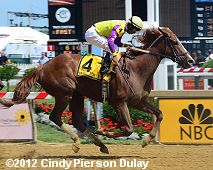 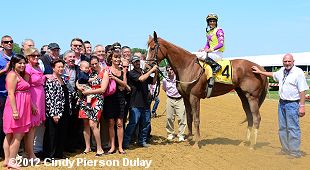 Kicking off the stakes action on Preakness weekend was the $100,000 Skipat Stakes featured a field of 5 older fillies and mares sprinting 6 furlongs. 6-5 favorite Bold Affair was 4th down the backstretch behind 10-1 pacesetter Afleet Lass. Entering the lane Bold Affair circled 4 wide to take the lead at the 1/8 pole to win by 1 1/2 lengths over 7-1 Valiant Passion in 1:11.71. It was another 2 1/4 lengths back to Afleet Lass third.

His jockey Abel Castellano Jr. said, "She got away a little slow today and she was not acting too good in the gate. I was fourth in the back and I wanted to stay pretty close because there were some fast fillies in there. (Valiant Passion) got to the lead and he looked like he wanted to keep going, so I better move now. It worked out good." Owner Mike Zanella added, "The filly is phenomenal. We're having so much fun with her. It's fantastic to win a race on Preakness weekend. It's a game of luck, and we happen to be the lucky ones."
Full results chart from DRF 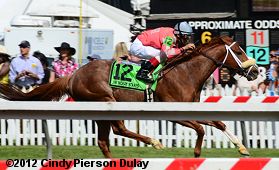 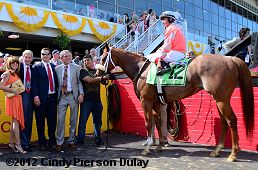 His trainer George Weaver said, "I was a little bit timid about running this horse 5/8. Sometimes going 5/8 you have to run and gun the whole way. I know he has good early speed, but I was a little bit reluctant to run 5/8. He was ready to run and we thought we'd run today and at least know if he does handle 5/8. Now we have a lot more options."
Full results chart from DRF 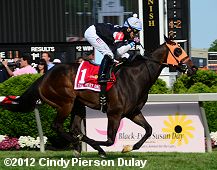 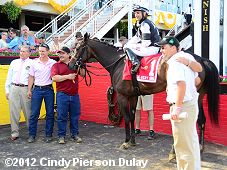 Her jockey Xavier Perez said, "We got away well and got into a good spot and waited to see what happened with the leaders. We saved ground and when a hole opened up, I went for it. We moved a little early and she gave 100 percent. This filly pulled away and never looked back. This is my first year in Maryland and my first stakes win. It's amazing."
Full results chart from DRF 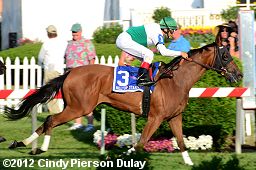 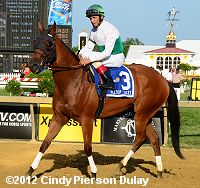 Her trainer Graham Motion said, "She ran super. She ran like I hoped she would. She doesn't want to get to the lead too early because she gets to looking around like she did in Florida. Johnny rode her confidently." Jockey John Velazquez added, "She did it pretty easy, kind of stalking the speed. When I pulled her out she was there. She takes the lead and she wants to wait, so there's more there than what she gave me. I think she'll get better."
Full results chart from DRF 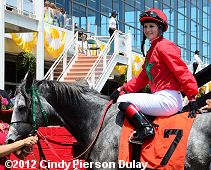 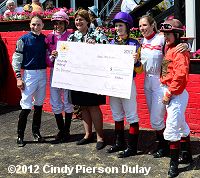 Another feature of the Friday before the Preakness is the $31,000 Pimlico Female Jockey Challenge, with 7 jockeys competing in 4 designated races to score points in a 12-6-4-3 format. Rosie Napravnik, who started her career in Maryland, came home to win the competition with 34 points, 16 more than runner-up Tammy Piermarini. Rosemary Homeister and Forest Boyce tied for third with 12 points each. Defending champion Emma Jayne Wilson was fifth with 11 points, then Greta Kuntzweiler with 10 and Vicky Baze with 3. Napravnik locked up the $10,000 top prize check by winning two of the four challenge races. She kicked off the contest winning the 2nd race aboard Silver Tie Affair, and then won the 5th race aboard 22-1 longshot Share Out. Abby Fuller was scheduled to compete but dropped out following the death of her father, trainer Peter Fuller, on Monday.

Napravnik said, "I haven't had much luck in these challenges, but I guess it all changed today. We had a great run. I had a couple of price horses that came in and ran well, so it's great. I'm really glad to come back on my home turf and represent a little bit. (Share Out) ran a great race. The way he moved forward on the turf, even though he didn't run a huge number, I thought with the time off he could move forward even more, so I had confidence. I know Todd Wyatt from a while back, so I had confidence in him, too. I just rode the races like any other race. This is the elite group so it feels great to win the challenge. I enjoy riding in Maryland altogether. I love coming here, because everybody's friends of mine and they all root for me. To win a challenge here is great."