Although the Pimlico Special was the biggest race of the day, the next biggest feature of the day was the Black-Eyed Susan Stakes (G2) for the 3-year-old fillies. There were two other graded stakes on the card as well, the Pimlico Breeders' Cup Distaff Handicap (G3) for the older filiies and the Miss Preakness Stakes (G3) for the 3-year-old filly sprinters.

Golden Eagle Farm's Yearly Report, the odds on favorite, was in contention for the lead from the beginning through slow fractions of 25.21, 49.71, and 1:13.97. Straightening for home, she and Rare Gift separated from the pack followed by Pawyne Princess who had been boxed in earlier. Yearly Report took the lead in the stretch and prevailed by 1 1/2 lengths over Pawyne Princess who was only a neck in front of Rare Gift in third. The final time was a slow 1:53.65 for the 1 1/8 miles. Yearly Report is trained by Bob Baffert and this was her second graded score. 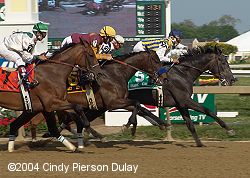 First time by the stands and it is Rare Gift, Yearly Report, and Native Annie on the lead with America America inside them. Jerry Bailey, rider of winner Yearly Report, said, "I don't think you'll ever see as slow a first half or three-quarters in the Black-Eyed Susan as today because everybody was acutely aware of how deep and tiring the track was, and nobody was in a hurry," 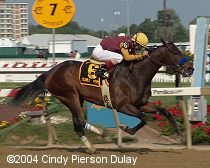 Yearly Report out front at the finish of the Black-Eyed Susan. Winning jockey Jerry Bailey said, "I thought she was on paper the better filly and if she didn't wear herself out and got the trip she would win. I would have been happy if they had outrun me a length or a length and a half (early) but I didn't want to take her out of her rhythm. She just went on to win." 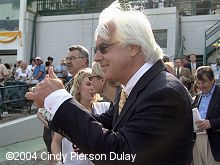 Winning trainer Bob Baffert celebrates the victory in the Black-Eyed Susan. He said, "It wasn't easy, but she doesn't know how to quit. This wasn't the Preakness, but we will take it. There is no question she likes to respond to a challenge. They can run up to her, but it's not easy to go by." 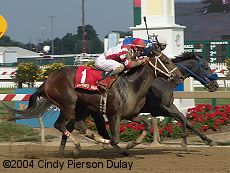 Forest Music, who was last in the Breeders' Cup Juvenile Fillies last year, made her first start of the year in the Miss Preakness Stakes a winning one. This time under jockey Ramon Dominquez, the usually speedy filly rated kindly behind the pacesetters, eased out five wide into the stretch and charged to the lead to win by just a head. Stephan's Angel came gamely after the winner but could only manage to be second. Fall Fashion was third.
Results Chart from Equibase. 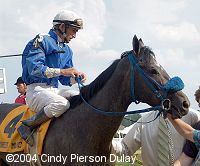 Forest Music and jockey Ramon Dominguez. He said, "She rated real nicely. Turning for home I was looking for a hole and decided just to swing her wide and try and force my way through. She did great in the lane, just floated away. It was a blessing, actually that the speed got away from us early." 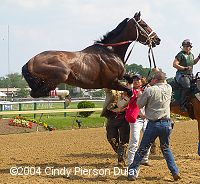 Second place finisher Stephan's Angel practices her flying while being saddled prior to the Miss Preakness Stakes. Her jocky Stewart Elliott said, " She had the inside post and she didn't like the dirt being kicked in her face. I knew I could run at the end and she came flying once we got out, but she got a little too far back trying to avoid the dirt. We just missed." 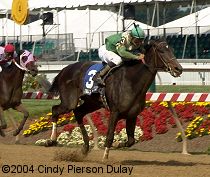 Friel's For Real had shipped to Maryland four times this year from her base at Philadelphia and won three times. She did it again today, pulling off an upset in the 13th running of the $150,000 Pimlico Distaff Breeders' Cup (Grade 3) for fillies and mares. She took off after front running favorite Angela's Love and tracked the pace for much of the 1-1/16 mile test on the main track. She went four wide into the lane then drew away to win by 2 1/4 lengths in 1:45.03. Another outsider, Saintly Action, finished second and Nonsuch Bay was third.
Results Chart from Equibase. 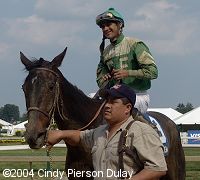 Friel's For Real with Abel Castellano up after the win. He said, "I rode her two starts ago and won a stake at Laurel. She likes to sit a little behind and run at them. She's a real nice filly who gave me everything when I asked her to go today." Trainer Ned Allard said, "This is for sure an improving filly. Sword Dance progeny just seem to get better with age. I was a little leery of today's race because I was moving back in distance. The rider said the distance was no problem at all."