The Saturday after Independence Day is one of the highlights of the Belmont Park spring-summer meeting, with 5 rich graded stakes run that afternoon. Intermittent showers passed through the area but the main track remained fast and the turf courses firm wth temperatures in the low 80's. The highlight race of the afternoon was the $1 million Belmont Derby Invitational (G1) for 3-year-olds going 1 1/4 miles on the inner turf course. American Turf (G2) fourth place finisher Seismic Wave was sent off as the lukewarm 9-2 favorite in the full field of 14, off his close 2nd in the Pennine Ridge (G3). In to challenge him uncluded 5-1 second choice Demarchelier, undefeated in 3 starts including the Pennine Ridge (G3), and 11-2 third choice Digital Age, also undefeated in 3 starts including the Columbia Stakes and the American Turf (G2). 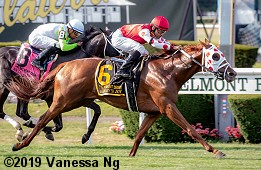 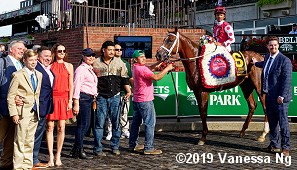 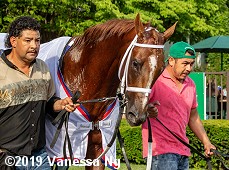 Left: Henley's Joy in the winner's circle. Winning owner Jeffrey Bloom said, "It's such a big race to win and it's so important, but for this particular horse, he's had the worst racing luck and he's just been so honest, so many rough trips, it was just so gratifying to see him be able to show everybody how talented he is. He's had so many near misses in situations where things didn't go right and he answered the call today in a big spot."

Right: Henley's Joy heads back to the barn after the race. Winning jockey Jose Lezcano said, "I had a very good trip. I broke out of the gate and going into the first turn I had one horse in front, one beside me. The horse seemed very comfortable. Around the backside, I was a little worried he was kind of jumping off the bridle. When I asked him to take off, it was easier because of how he broke out of the gate. It's been a very good meet. All the trainers have given me great opportunities and I'm very grateful for them." 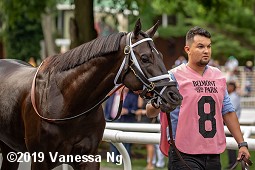 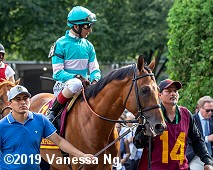 Left: Second place finisher and beaten favorite Social Paranoia in the paddock before the race. Jockey Manny Franco said, "I got the trip that I wanted. The horse responded to me every time that I asked. I just got beat by a better horse. This is the second time that I've been on him and he ran great for me. I could not ask for more."

Right: Third place finisher Rockemperor heads out of the paddock before the race. Jockey John Velazquez said, "It was a very good effort. He just didn't break good enough to be closer up front. Following the start, he came out with a good run and finished up well." 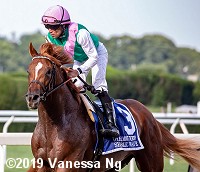 Left: Fifth place finisher and beaten favorite Seismic Wave returns after the race. The 9-2 choice was 11th early and 11 lengthe off the pace under Joel Rosario then passed tired horses to finish 5th beaten 3 3/4 lengths. The Bill Mott trainee has a record of 2 wins, 2 seconds, and 1 third in 7 starts, earning $223,150 for owner-breeder Juddmonte Farms.

Right: The horses break from the gate for the Belmont Derby.

Jockey Miyabi Muto sent 42-1 Jodie to the lead first time by and she set fractions of 24.29, 49.16, 1:14.14, and 1:37.79 while pressed by Concrete Rose and stalked by Newspaperofrecord. Entering the stretch, Jodie tired allowing Concrete Rose to take over through 9f in 1:49.24. Kept to task by jockey Julien Leparoux, Concrete Rose drew off late to win by 2 3/4 lengths over late-running 18-1 Just Wonderful in 1:59.97. It was a nose back to Cambier Parc third, while favorite Newspaperofrecord came up empty late to finish last beaten 13 1/4 lengths. 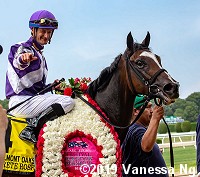 Left: Concrete Rose in the winner's circle. Winning trainer Rusty Arnold said, "It's a long year, but her last two have really moved her forward. I was impressed today. I was very, very happy with how she ran. (I was concerned) that I rested her too much. Everyone had run and we hadn't run in two months and a couple of days and I was a little worried. Her training went smooth, her works went smooth and everything went well. Sometimes your plan works and sometimes it doesn't work, but this one worked. Absolutely (will run in the Saratoga Oaks). Unless there's an issue. That's why we rested her and hopefully it worked."

Right: Concrete Rose heads to Victory Lane. Winning jockey Julien Leparoux said, "I thought (Newspaperofrecord) would be on the lead unless they came for her, but I guess today they tried something new and took her back a little bit. (Jodie) wanted to go, so I was happy to be second and my filly relaxed beautiful for me the whole race. I knew at the 1/4 pole, I had a lot left. She made a big run at the end. It was nice. She's pretty easy to rate. She seemed nervous in the paddock, but when she's on the track, she's just very easy to ride. I knew was going to relax and I wasn't really that concerned about the distance." 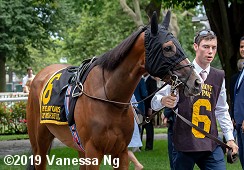 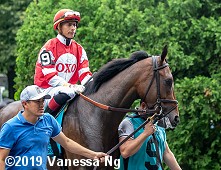 Left: Second place finisher Just Wonderful in the paddock before the race. Jockey Wayne Lordan said, "She likes to drop in at the races at home, so we decided to do the exact same thing here. I thought she came home really well. It's her first time going that trip as well, and for the future she'll get that trip. Hopefully, she can come back out here and compete again. I'm delighted with the run."

Right: Third place finisher Cambier Parc heads out of the paddock. Trainer Chad Brown said, "She ran terrific. I thought she got a pretty good trip. The winner was tons the best today. She really performed. Unfortunately, we just lost second by a bob, but I was proud of her effort.: 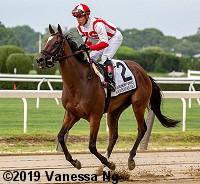 Left: Last place finisher and beaten favorite Newspaperofrecord returns after the race. Trainer Chad Brown said, "She didn't want to rate at all, she was all over the place. It was no fault of Irad (Ortiz)'s, the filly just wouldn't cooperate. So, we tried it, it didn't work, and that's that."

Right: The start of the Belmont Oaks.

The $300,000 John A. Nerud Stakes (G2), formerly run as the Belmont Sprint, featured a field of 7 older horses sprinting 7 furlongs on the main track, with the winner earning automatic entry to the Breeders' Cup Sprint (G1) under the Breeders' Cup Challenge "Win and You're In" promotion. Metropolitan (G1) fourth place finisher Promises Fulfilled was sent off as the 3-5 favorite over 4-1 Nicodemus, 4th in the True North (G2), and 7-1 Do Share, 4th in the Churchill Downs (G1). 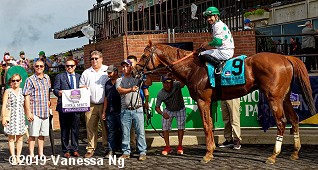 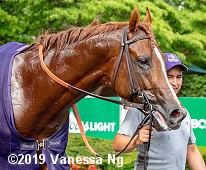 Left: Promises Fulfilled in the winner's circle. Winning trainer Dale Romans said, "It didn't look like there was much speed and when (Killybegs Captain) missed the break, that left him out there. He was going to be hard to beat if no one pressed him. He hadn't had that slow of a pace in his life. Look at the horses he's been running against; this race finally gave him a bit of class relief. But this should set him up well. Where we go next, we'll have to sit down and figure it out. He can make a mile. There's just a good group of horses running 3/4 and a mile. We'll get that all figured out."

Right: Promises Fulfilled heads back to the barn. Winning jockey Luis Saez said, "He broke so sharp. He always breaks sharp. The last time, he missed the break, but today he broke so clean, he was right there. When he came to the stretch, and he switched leads, he was running. I still had a lot of horse. It's very hot today. He got a little tired when he crossed the wire, but that's normal. I think he's 100 percent. He feels way better than he did in his last races, and let's see what happens in Saratoga." 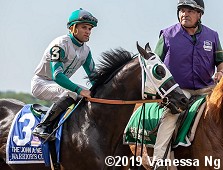 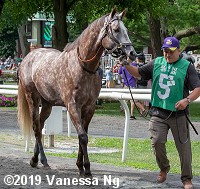 Left: Second place finisher Warrior's Club in the post parade. Jockey Joel Rosario said, "It was a nice finish by him. Chasing the leader, he was the horse to beat, and my horse kept fighting. It was a good effort."

Right: Third place finisher Killybegs Captain in the paddock before the race. The 24-1 shot stalked the pace in third under Eric Cancel but could not improve late, finishing third beaten 4 3/4 lengths. The John Terranova trainee improved his record to 5 wins, 5 seconds, and 2 thirds in 21 starts, earning $305,453 for owner Curragh Stables.