The Saturday after Independence Day is one of the highlights of the Belmont Park spring-summer meeting, with 5 rich graded stakes run that afternoon. Conditions were excellent on Long Island, with partly cloudy skies and temperatures in the low 70's, with a fast main track and both turf courses firm. The highlight race of the afternoon was the $1.2 million Belmont Derby Invitational (G1) for 3-year-olds going 1 1/4 miles on the inner turf course. Transylvania Stakes (G3) winner Analyze It was sent off as the 9-4 favorite in the field of 9 off his second place finish in the Pennine Ridge (G3). In to challenge him included 5-2 second choice Hunting Horn, winner of the Hampton Court (G3) at Royal Ascot, and 5-1 third choice Catholic Boy, winner of the Pennine Ridge. 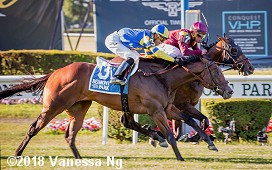 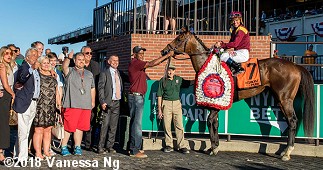 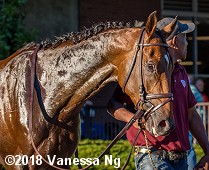 Left: Catholic Boy in the winner's circle. Winning trainer Jonathan Thomas, celebrating his first Grade 1 win said, "What a stretch drive. My hats off to Analyze It, he ran super. It was a hell of a horse race. He really has an awful lot of heart. I didn't expect him to fight back this time. I thought we were going to finish a really good second, but somehow he got it done. He's always been a real generous training horse. You never know how they will respond in that scenario because we never put them in that situation in the mornings. Between his heart and Javier's ride, what can you say? We had no instructions before the race. We just wanted him to ride him by gut instinct and do what he thought was best."

Right: Catholic Boy in the paddock before the race. Winning jockey Javier Castellano said, "It's good for the sport to see two of the best 3-year-old horses on the turf run the way they did. They put a lot of effort, it's two good horses and it can go either way. I'm very fortunate it went my way. I'm very respectful of Analyze It, he's a great horse with a great trainer. Someone had to win the race, and I'm lucky to be in the spot I am. [Catholic Boy] gives me a lot of confidence because we decided to take the lead and dictate the pace, and I think it was the key to win the race." 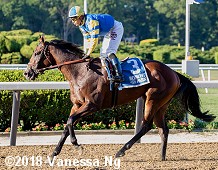 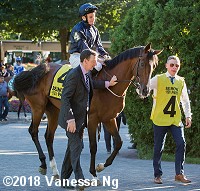 Left: Second place finisher and beaten favorite Analyze It returns after the race. Trainer Chad Brown said, "This horse that won earned it. He came back and beat [Analyze It], I don't have any excuse. It sure seems that [Analyze It idles], but I don't want to take anything away from the winner, because he still fought back and most horses wouldn't. I thought he ran a great race, the winner, but so did our horse. He just wasn't good enough. He got a really good trip. It's hard to time these things just right. Yeah, he made the lead and waited again, but, then again, how long are you supposed to wait? If you wait too long then you won't get there. Today, I told Jose [Ortiz] that he gave the horse a really good trip and, unfortunately, we were on the wrong end of that."

Right: Third place finisher Hunting Horn heads out of the paddock before the race. The Aidan O'Brien trainee improved his record to 2 wins, 1 second, and 3 thirds in 8 starts, earning $229,280 for owners Michael Tabor, Susan Magnier, and Derrick Smith. 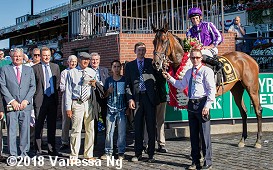 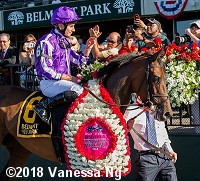 Left: Athena takes her walk down Victory Lane. T.J. Comerford, assistant to winning trainer Aidan O'Brien said, "I don't think it was a surprise really because she traveled here well and Donnacha [O'Brien] wasn't hard on her when she ran last week at the Curragh. Six days later, 1 1/4 miles on hard ground is probably her trip. She can probably go a bit farther as well but it's great to get her going at 1 1/4 and she can go 1 1/2 in time. She's won over 1 1/4 and she does it impressively. She didn't look like she was stopping. The pace started off quick but it got moderate. She was in a good enough position. Ryan knew he had enough horse under him to do what he wanted. He just had to the press the button on her, and whenever he wanted her to go, she went.

Right: Athena in the winner's circle. Winning jockey Ryan Moore said, "There was no real plan, to be honest. She's a very straightforward filly. She's taken her racing very well. I rode her before the start of the year and all she's done is improve tremendously. In her first out, I wasn't sure what she could do. The second time I rode her, she really impressed me. This was the third time I've rode her and I thought she was very impressive. These Camelots seem to be coming into themselves now. He's had a lot of very good horses very quickly. It was a nice even pace and when I asked her to move forward around the turn, the race was over very quickly. She couldn't have done better." 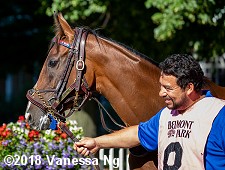 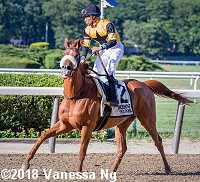 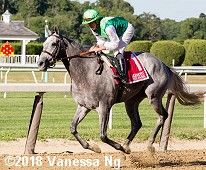 Fourth place finisher and beaten favorite Significant Form returns after the race. Trainer Chad Brown said, "I thought she got a good trip in the pocket. I don't really have any excuse other than I think we found out today she probably doesn't want to run that far. As evidenced by her not being able to hold on for second in the deep stretch, it was clear who the winner was going to be, it was a matter of who was going to finish second. Her being unable to do that was the most telling part about her distance limitations."

Jockey Irad Ortiz Jr. added, "I got a perfect trip. I have no excuse. I got beat by a nice filly to be fourth. Distance, probably, I don't know. Hopefully, she comes back good and we'll regroup and see what to do. She's a nice filly. She was still finishing. She tried hard, but she couldn't make it today."

The $350,000 Belmont Sprint Championship (G2) featured a field of 6 older horses sprinting 7 furlongs on the main track, with the winner earning automatic entry to the Breeders' Cup Sprint (G1) under the Breeders' Cup Challenge "Win and You're In" promotion. Churchill Downs Stakes (G2) winner Limousine Liberal was sent off as the 9-5 favorite off a third place finish in the Metropolitan Handicap (G1). In to challenge him included 2-1 second choice Whitmore, second in the True North (G2), and 7-2 third chice Favorable Outcome, 2nd in allowance company after finishing 6th in the Carter Handicap (G1).

Jockey Jose Ferrer sent 9-2 fourth choice Shaft of Light to the front down the backstretch through fractions of 22.22 and 44.84 while pressed by 10-1 Eye Luv Lulu and stalked by Whitmore. Entering the lane Shaft of Light tired badly as Eye Luv Lulu inherited the lead through 3/4 in 1:08.88. However, Limousine Liberal, 5th early under Jose Ortiz, came out 5 wide for room and rallied to win by a neck over Whitmore in 1:21.53. It was another 1 3/4 lengths back to Eye Luv Lulu third. 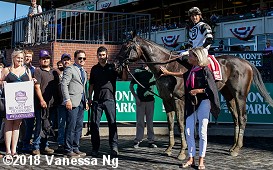 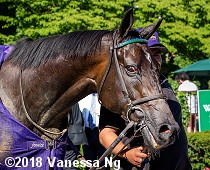 Left: Limousine Liberal in the winner's circle. Winning trainer Ben Colebrook said, "I could see Jose had a ton of horse and I knew he was going to make his run. I didn't want the wire to come too soon because he was coming with a big run. I'm just glad he proved he can win outside the state of Kentucky. I thought we were in the right place. I thought maybe we'd be ahead of Whitmore, maybe not so far back, but they went so fast. Jose knew where to have him. It's taken me so long to find the winner's circle in New York; I'm just happy for this. We'd have to think about the Forego next but we were going to go to the Breeders' Cup even if we had to pay our own way in."

Right: Limousine Liberal heads back to the barn. Winning jockey Jose Ortiz said, "He wasn't pulling me like he used to, so I thought they were going too fast. They went 44 [half mile] and it paid off in the end. I didn't expect Whitmore [No. 2] to be in front of me, so I decided to follow. I knew my horse was going to have something for the end. He decided to go the rail. I thought he was a little tired, so I went outside. But I'm glad I didn't have to check hard and I'm [happy] I was able to win the race." 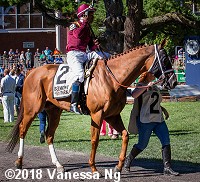 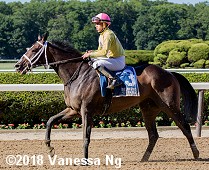 Left: Second place finisher Awesome Slew in the paddock before the race. The Mark Casse trainee improved his record to 5 wins, 5 seconds, and 5 thirds in 20 starts, earning $1,194,940 for owner-breeder Live Oak Plantation.