The $1.5 million Belmont Stakes (G1), contested at 1 1/2 miles, one lap of the Belmont Park main track for 3-year-olds, is the third jewel of the Triple Crown, with 60,114 fans coming out to Belmont Park in Elmont, New York, despite the lack of a Triple Crown possibility this year. Conditions were excellent most of the day, with partly cloudy skies and temperatures in the low 80's, with the forecasted rains falling during the post-race festivities. As expected, Santa Anita Derby (G1) and Preakness Stakes (G1) winner and Kentucky Derby (G1) runner-up Exaggerator was sent off as the 7-5 favorite in the field of 13. In to challenge him included 5-1 second choice Suddenbreakingnews, fifth in the Kentucky Derby after finishing second in the Arkansas Derby (G1), and 13-2 third choice Stradivari, fourth in the Preakness. 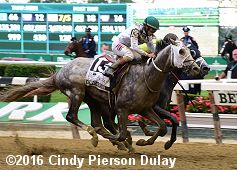 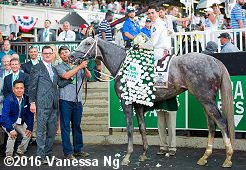 Left: Creator in the winner's circle. Co-owner Bobby Flay said, "The truth was that I had planned to bring about 15 to 20 people to the Belmont Stakes, which I do every year, and I had a horse named America, a filly, who was going to run in the Ogden Phipps, but I retired her just last month. So I really had nothing to run. Mr. Walden told us that we could get involved in Creator. It's not really the thing I usually do because I usually buy fillies. But having a chance to be involved with a horse like that, with a farm like that, and the people that are involved in it, just it was a no brainer for me."

Right: The trophy celebration with the happy connections. Elliott Walden, president of co-owner WinStar Farm said, I don't think it's any secret that Steve is a Hall of Fame trainer. I know he's getting in this year, but like when you've won 7,300 races, and we try to align ourselves with trainers that are Hall of Fame trainers. So Steve's done extremely well with some Tapits. They can be a little difficult. I know Steve loves me saying this because he wants to train every Tapit in the world." 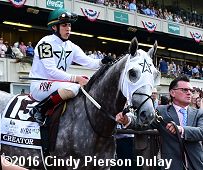 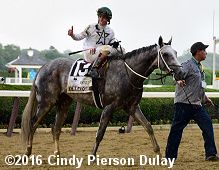 Left: Creator heads out to the track before the race. Winning jockey Irad Ortiz Jr. said, "He was calm and I just waited for somewhere to go. When he got clear, he started running. Thank you for the owners for giving me the opportunity. Steve Asmussen did a great job and thanks to him, I'm here today. It's an amazing feeling. It's very important to me."

Right: Creator parades for the fans after the race. Trainer Steve Asmussen said, "I thought Irad gave him a perfect trip. I thought he saved yards and won by inches. He made the difference. He saved a lot of ground going into the first turn. 48 4/5 for a half allowed Creator to show who he is. I thought quite a bit of traffic around the 1/4 pole; Irad was beautifully patient. He went through a lot of traffic very smooth. Very proud of Creator; he stayed focused through the traffic and did all he could to get up and win a great race." 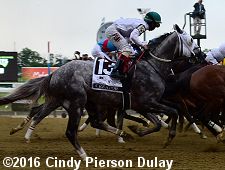 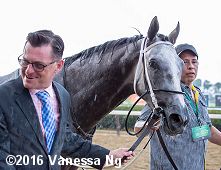 Left: Creator shortly after the start of the race. Asmussen added, "Loved where he dropped him over in the first turn. Just felt very good about his chances, knew that he had a chance to run his race. Just focusing on him when he got a little daylight at the head of the stretch, here he came. Just rooting on him. When he got to the wire, you thought he won. We were waiting for him to put up the number to turn loose."

Right: Creator heads back to the barn. Walden added, "I thought he was going to win at the eighth pole easier than he did. I thought Destin showed a courageous effort to hang in. He had momentum. He was coming. You think back to the Arkansas Derby, and he went whoosh, like that. He couldn't get by Destin. I don't know how many lengths, it was two or three lengths back to the third horse. Both horses ran a winning race. I did have flashbacks to Commissioner about four jumps before the wire." 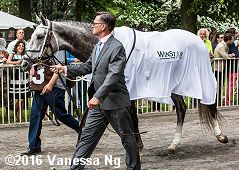 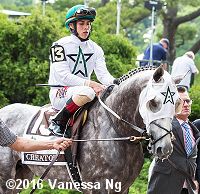 Left: Creator enters the paddock. Walden added, "Today just validated his whole career to this point. If he didn't win today, you'd think, well, maybe the Arkansas Derby was just a fluke, but the fact that he won today validates everything that he's done, and he's going to be a horse that's going to be a lot of fun." 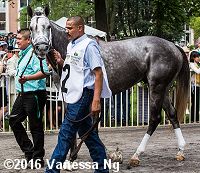 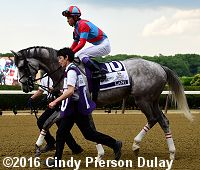 Right: Third place finisher Lani goes out for the post parade. Jockey Yutaka Take said, "He was in very good condition and the distance was good." 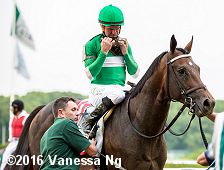 Left: Eleventh place finisher and beaten favorite Exaggerator returns after the race. Jockey Kent Desormeaux said, "I nursed him to the quarter pole and set him down, put him down for a mad drive and said, 'Show me your stuff.' The horse was empty. He came off the bridle at the four and a half. I didn't move. I sat quiet and let him steady there, I let him cruise. When I picked him up at the 1/4 to go ahead and try to win the race, there was nothing there. He did not quicken and he has a turn of foot, and my brother and I call it, we say when I turn this guy loose he pops a wheelie he gets up so fast. And there was nothing there."

Right: The horses break from the gate for the Belmont Stakes. 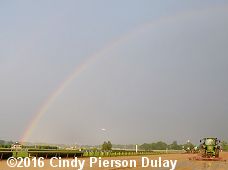 The sun and a rainbow came out after the race and just before the trophy presentation while they were sealing the track. It appeared to be coming out of the gazebo in the infield which has the silks of the Belmont winner painted on it, which a crew was preparing to change over from American Pharoah's from last year.