A record crowd of 120,139 converged on Belmont Park hoping to see the undefeated Smarty Jones become racing's twelfth Triple Crown winner and the first since Affirmed in 1978. However, unlike at the Derby and Preakness, the racing gods were not friendly to the popular Pennsylvania-bred, as local hero Birdstone upset the huge favorite giving trainer Nick Zito his first Belmont Stakes win after five career second placings. As soon as Birdstone hit the finish line a length ahead of Smarty Jones, the loud cheers of the crowd dropped into a stunned silence in disbelief. However, unlike last year's winner Empire Maker, Birdstone was not roundly booed by the partisan crowd.

When the gate opened, 10-1 shot Purge went to the front with 7-1 shot Rock Hard Ten and 2-5 favorite Smarty Jones pressing him through a quarter in 24.33 and a half in 48.65. At this point Purge dropped from contention, and the favorite inherited the lead. Rock Hard Ten continued to threaten as Smarty Jones went 6 furlongs in 1:11.76, a mile in 1:35.44, and 10 furlongs in 2:00.52. 36-1 longshot Birdstone, who settled back in seventh early on, made his move four-wide on the turn, came on strong, and battled with the favorite inside the 1/16 pole. With 50 yards to go, the stubborn Smarty Jones gave up the lead in the stretch for the first time in his career, as Birdstone finally shook him off to win by a length in 2:27.50 over the fast track. It was 8 lengths back in 28-1 shot Royal Assault in third. 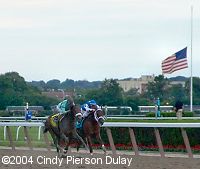 Birdstone collars Smarty Jones in deep stretch before pulling ahead to win. In the background you can see the flag at half-mast in memory of President Ronald Reagan. His passing was announced to the crowd earlier in the card and a moment of silence was held. 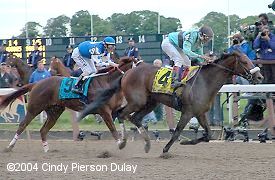 Birdstone and Smarty Jones at the finish of the Belmont. Winning jockey Edgar Prado said "I feel a little bad. Smarty Jones is still pretty good but [Birdstone] is bred for the distance. I was very comfortable all the way around." The win was Prado's second in the Belmont, both times denying a Triple Crown. He was aboard Sarava in 2002. 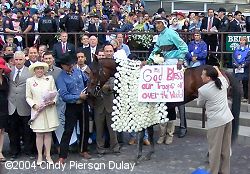 Birdstone in the Belmont winner's circle. Winning trainer Nick Zito said, "What can I say? It was one emotional thing. It's sad because Smarty is great for racing." Zito also trains third place finisher Royal Assault. 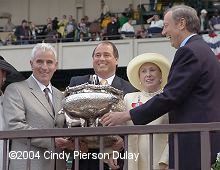 The trophy presentation with Nick Zito (left) and Mary Lou Whitney. Zito said, "I feel great. We got it for the right people The Whitneys are great." 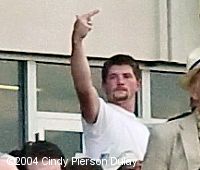 One disappointed fan showed his opinion of Zito's upset by flipping him a "Birdstone." He held this pose during the entire trophy presentation and television interviews after the race. 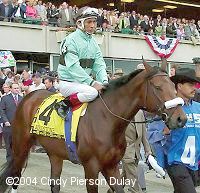 Birdstone and Edgar Prado head out for the post parade. Prado said, "I had a feeling he would run a good race after the Derby. The time between races had him nice and fresh." 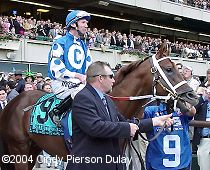 Smarty Jones heads to the track for the Belmont. His jockey Stewart Elliott said, "I had a little trouble getting him to settle. He just never got a break. The mile and a half got to him. When I looked back and saw the way [Birdstone] was running at me I said we might be in trouble here. I just hope you know that it's fair and square and that's the way it went. I have no complaints." 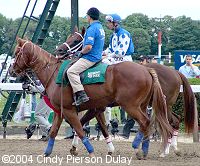 When the post parade went by, the crowd cheered very loudly for him and he looked over the pony's neck to see what all the fuss was about. Trainer John Servis said, "We've had a great year and I'm really proud of what we have done. I'm proud of the whole team and everybody needs to be happy." Servis is going to give Smarty Jones a break and then aim for the Breeders' Cup Classic. 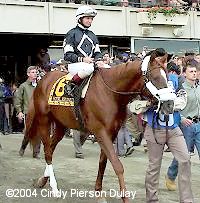 Third place finisher Royal Assault. His jockey Pat Day said, "He may have settled a little too nicely. He dropped back a bit, and when we got to the 3/8 pole I called on him to pick it up again. He was running and kept running to the end. I was real pleased with this race."