The feature race at Santa Anita on Saturday was the $300,000 Beholder Mile Stakes (G1) for older fillies and mares going 1 mile, one full lap of the main track. Conditions were excellent again with sunny skies, a fast track, firm going, and temperatures in the low 60's. As expected last year's Santa Anita Oaks (G1), Alabama (G1), and Preakness Stakes (G1) winner Swiss Skydiver was sent off as the 7-5 favorite, unraced since disappointing in 7th in the Breeders' Cup Distaff (G1). In to challenge her included 9-5 second choice As Time Goes By, making her stakes debut off 2 straight allowance wins, and 3-1 third choice Harvest Moon, 4th in the Breeders' Cup Distaff after winning the Torrey Pines (G3) and Zenyatta (G2).

Jockey Juan Hernandez sent 7-1 Golden Principal to the lead first time by and she set fractions of 23.14, 46.80, and 1:11.19 while pressed by Harvest Moon and stalked by Swiss Skydiver. Turning for home, jockey Robby Albarado moved Swiss Skydiver out 3 wide for room and she easily swept to the front through 7f in 1:23.54. Kept to task by Albarado, Swiss Skydiver powered away to win by 2 3/4 lengths over late-running As Time Goes By in 1:36.18. It was another 1 3/4 lengths back to pacesetter Golden Principal third. 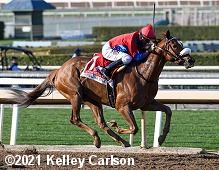 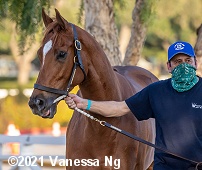 Left: Swiss Skydiver in the winner's circle. Winning trainer Ken McPeek said, "Yes, she met expectations, but you never know. The distance for me was a little bit of a worry because of the run into the first turn. But Robbie does know her so well, to get her in 12s (for each eighth of a mile), just get her in a nice rhythm and let her make her run. You know, you can't force anything with her, and if you go too fast early, she will wilt a little bit. She like cruises through everything, even when she gallops."

Right: Swiss Skydiver heads back to the barn after the race. Winning owner Trish Callahan said, "It's been absolutely incredible. So much joy with the whole last year's situation we weren't able to go to a lot of the races but we'd watch her and we cheered her on with Kenny and Sherrie. I'm just so proud of her. ‘Swissy', we call her Swissy, named after my niece of course, so they are all cheering on today. I wish my dad could have been here but I happened to be here and it all worked out. I'm so proud of my dad, so proud of Swissy and Kenny and his team. It's just meant the world to us this past year. We can't wait to see what this year brings because she's not done yet, she wants to run. She's just getting started. 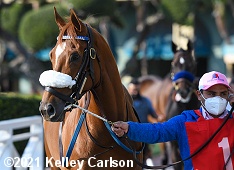 Left: Swiss Skydiver in the paddock before the race. McPeek added, "The feed tub's the biggest deal with her. I've never had a horse, colt or filly, eat like she does. It just makes my job so much easier. Maybe the Apple Blossom, maybe the La Troeinne, one of those two, She's just really good, maybe we'll go hunt Monomoy Girl now, we'll see."

Right: Swiss Skydiver returns after the race. Winning jockey Robby Albarado said, "Being on the inside, circumstances dictate that you need to get away clean to get some kind of a forward position. I knew we had speed in the race but if I could get her in position, get her to clip off twelves every eighth she comes home pretty fast. Pretty much up the backside, every point I felt like she was right there with me the whole way. She was taking deep breaths around there. When I finally gave her some room there she took off. It was all her, I was just a passenger. She's been phenomenal, she's been great since the day one when I set eyes on her. Kenny has done an exceptional job coming here, from across the country to get her a Grade 1." 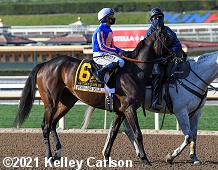 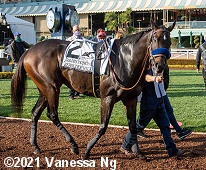 The fillies break from the gate for the Beholder Mile.


Immediately before the Beholder Mile, the $100,000 San Simeon Stakes (G3) featured a field of 6 older horses sprinting 6 furlongs on the turf. Jolie Olimpica was sent off as the 11-10 favorite off her second place finish in the Las Cienegas Stakes (G3). In to challenge her included 7-2 second choice Gregorian Chant, winner of the Clocker's Corner Stakes, and 4-1 third choice Sombeyay, fourth in the Thunder Road (G3).

Jockey Mike Smith sent Jolie Olimpica to the lead exiting the chute through an opening quarter of 22.72 before 7-1 Cistron took over on the turn through a half in 45.52. In the lane, Sombeyay gained the lead through 5f in 57.32 but Gregorian Chant, 5th early under Juan Hernandez, came out 4 wide into the stretch and rallied to get up by a neck in 1:08.79. It was another 2 1/2 lengths back to favorite Jolie Olimpica third. 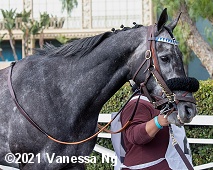 Left: Gregorian Chant in the winner's circle. Winning trainer Phil D'Amato said, "It took us awhile to figure out what he wanted to do. This horse has found his home sprinting, no question. There's so much difference in him now, compared to him at three and four (years old). He's matured a lot and we will definitely keep him short."

Right: Gregorian Chant in the paddock before the race. Winning jockey Juan Hernandez said, "He's a really cool horse, he loves to run at the end part. He broke slow and I just let him get comfortable in the back and then when we went into the stretch, Phil had told me to get him rolling and that's what I did. The horse is a nice horse he helped me a lot in the stretch I went out and he did the rest to win the race. It's really fun. It's exciting fighting with another horse, going head and head, you feel excited and you feel strong, you just wan to win the race. Thanks to the owners and the trainer for the opportunity." 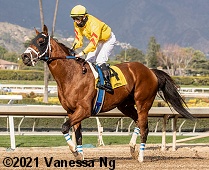 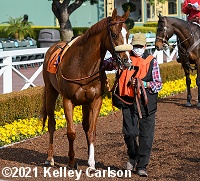 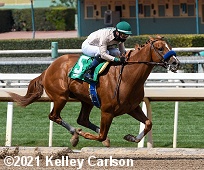 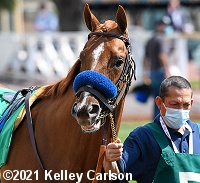 The second race on Saturday was a $61,000 maiden special weight for older horses sprinting 7 furlongs, but was the debut of 3-year-old Triple Tap, a half brother of 2015 Triple Crown winner American Pharoah, by Tapit out of Littleprincessemma. Under Flavien Prat, the 1-5 favorite in the field of 4 presed the pace, took over at the 3/16 pole and drew off to win by 4 1/4 lengths in 1:23.12, as the only first time starter in the race. Prat said, "He broke well, we were right with the leader, which was good. It felt like he was just starting to stretch his legs and he galloped out strong." Results Chart

Winning trainer Bob Baffert added, "It went well and he rated kindly. When Prat asked him to go, he took off. He looked like he was in control of the race and Flavien worked him the other day for me and he really loved him. He usually doesn't say too much. When he came back, he said it was nothing for him, he was just getting going here in the end, so that's good sign. It's going to be a little difficult (to go next in the Santa Anita Derby), the thing is, we don't (want) to rush him, so we're not even thinking about that right now. I want to get this race out of the way and then we're gonna talk about it and figure out what we're gonna do. He won nice, it looks like he can go two turns easily, I just like what I saw today."