The $4 million Longines Breeders' Cup Turf (G1) is the longest race of the World Championships, for older horses going 1 1/2 miles around 3 turns of the Matt Winn course at Churchill Downs. 4-year-old filly Enable, winner of the last 2 Prix de l'Arc de Triomphes (G1) was sent off as the 4-5 favorite, attempting to be the first winner of the Arc and BC Turf in the same year. In to challenge her include 5-1 second choice Waldgeist, 4th in the Arc after winning the Grand Prix de St-Cloud (G1) and the Prix Foy (G2), and 15-2 third choice Channel Maker, winner of the Joe Hirsch Turf Classic (G1) at Belmont. 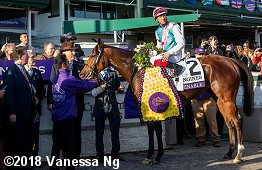 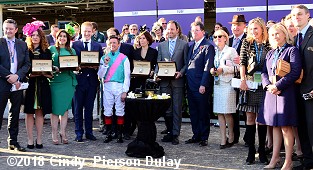 Left: Enable in the winner's circle. Winning trainer John Gosden said, "She was wonderful. I thought coming into the straight when Ryan (Moore on Magical) came up on her, we had a race on our hands. She's had a hard race and as usual she showed enormous courage to go and win. I'm just delighted for her owner and breeder, Prince Khalid (Abdullah, owner of Juddmonte) who is such a great supporter of the Breeders' Cup."

Right: The trophy presentation for the Turf. Winning jockey Frankie Dettori said, "I was a bit further back than I wanted to be. But from the bend to the back straight, I was four-wide. I felt that the ground was much worse on the inside. I didn't have the novelty to be wide with the draw. I was drawn two, and she didn't break that well. We were going pretty fast for 1 1/2 miles on soft ground. Then I knew that pace couldn't keep up. So then I was just waiting for her to give me the message she was ready to go." 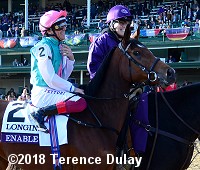 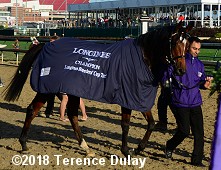 Right: Enable heads back to the barn. Lord Teddy Grimthorpe, racing manager for Juddmonte said, "Prince Khalid has always been a huge supporter of the Breeders' Cup. First thing in his diary, he wants to know when the Breeders' Cup is, where it is. He's been an absolute staunch supporter from the very beginning, the concept of course he has really embraced. He's shown that we sends his best horses to compete here. To have this historic day for Juddmonte, really, to have two major, major winners, and a filly doing something that no other horse has ever done, only eight horses have won two Arcs, and she's come back. Injury was a setback at the end of the spring, the beginning of the summer. Everything that could have gone right did really go right in terms of recuperation." 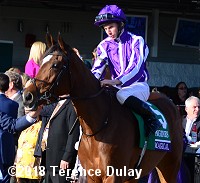 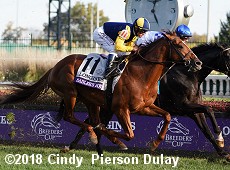 Right: Third place finisher Sadler's Joy first time by. Jockey Javier Castellano said, "I had a perfect trip. It was a good third-place finish. He beat a lot of good horses in the race. Those two horses (Enable and Magical) in front of him were much the best. I'm proud of my horse and the way he did it." Trainer Tom Albertrani added, "Turning for home I thought we were going to win it, but they just outran him." 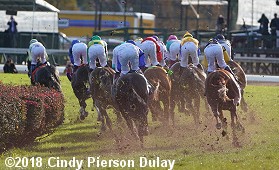 Left: First time down the stretch in the Turf with Glorious Empire in front of Channel Maker and Hi Happy with Enable fourth out behind them.

Right: Kicking up divots as they go around the clubhouse turn.