The $1 million Breeders' Cup Turf Sprint (G1) featured a full field of 14 older horses sprinting 5 1/2 furlongs around one turn. Quick Call and Allied Forces Stakes winner World of Trouble was sent off as the 2-1 favorite. In to challenge him included 9-2 second choice Disco Partner winner of the Belmont Turf Sprint after finishing third in the Troy Handicap (G3), and 7-1 defending champion Stormy Liberal, winner of the Eddie D Stakes (G3) last out.

Jockey Irad Ortiz Jr. sent World of Trouble to the front immediately and set fractions of 22.50 and 45.83 while pressed by 19-1 Havana Grey and stalked by 33-1 Richard's Boy. World of Trouble continued to lead to the 1/8 pole through 5f in 57.71 but Stormy Liberal, 4th early under Drayden Van Dyke, rallied 4 wide to catch him and win by a neck in 1:04.05. It was a long 7 1/4 lengths back to late-running Disco Partner third. 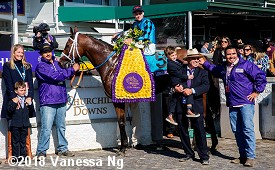 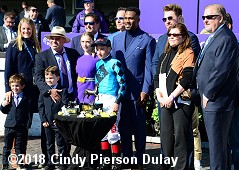 Left: Stormy Liberal in the winner's circle. Winning trainer Peter Miller said, "The emotions and the highs and lows I have gone through in this game in the past year are indescribable. I am just thankful to be back here. It is amazing to win this race two years in a row with this horse. It is a dream come true."

Right: The trophy presentation for the Turf Sprint. Brian Trump, racing manager for owner Rockingham Ranch said, "He's a very, very smart horse and Pete and Drayden have had many conversations about this horse and his style and he just knows where the wire is. So while it did at first give us some anxiety, I think we're used to it by now." Co-owner David Bernsen added, " It's pretty much up to Peter where the horse goes. So I think he commented maybe Dubai might be in the mix or I would think the long-term target, what he said is try to triple up on this race next year." 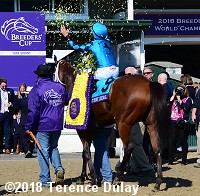 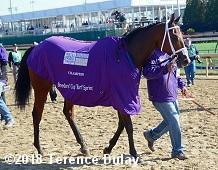 Left: Stormy Liberal heads to the winner's circle in a shower of flower petals. Jockey Drayden Van Dyke, celebrating his first Breeders' Cup win, said, "He broke really sharp. I knew there were a few who were going to be a little bit faster than me. I bided my time and let them get by me, then just tipped him outside. From there on, it was up to him to do the running. Stormy Liberal likes to hang on horses and not pass them, but he got him. It was awesome."

Right: Stormy Liberal heads back to the barn after the race. Miller added, "I don't know if anything could be as sweet as winning at home last year at Del Mar, but this is awfully close. It's hard to compare. Certainly winning on the road is special because harder, it's just tougher to come and do it over here against the East Coast and the European horses." 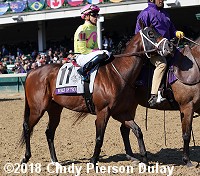 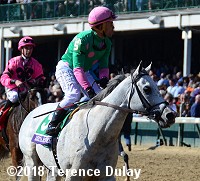 Left: Second place finisher and beaten favorite World of Trouble in the post parade. Trainer Jason Servis said, "He ran really hard and he tried. He's a 3-year old. He'll get better." Jockey Irad Ortiz Jr. added, "He had no excuse. He just got beat by a nice horse. He wanted to fight, but he lugged in a little bit so I wanted to be close to Stormy Liberal so he could feel (the competition)."

Right: Third place finisher Disco Partner returns after the race. Jockey Joel Rosario said, "He broke well and then took a little bit of time to find his stride. It looks like the turf was a little soft for him, but he came with a late run in the end. They got away, so it was hard to catch up."