The $1 million Breeders' Cup Juvenile Turf (G1) is a 1 mile test around 2 turns of the Jimmy Durante turf course at Del Mar for 2-year-old colts and geldings. Mendelssohn was sent off as the 9-2 favorite off a second place finish in the Dewhurst (G2) at Newmarket. In to challenge him included 5-1 second choice Masar, winner of the Solario (G3) at Sandown but third in the Prix Jean-Luc Lagardere (G1) at Chantilly, and 6-1 third choice Catholic Boy, winner of the With Anticipation (G3) at Saratoga. 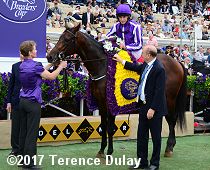 Left: Mendelssohn heads to the winner's circle. Winning trainer Aidan O'Brien said, "He was a late foal and every week he's getting better. We knew he has a dirt pedigree but we just didn't want to stop that progression so we left him on the grass. Hopefully he's the sort of horse we could train for the Kentucky Derby now, particularly now that we have a trial race for that at home."

Right: The trophy celebration for the Juvenile Turf. 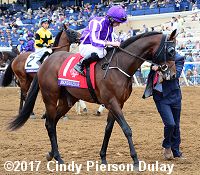 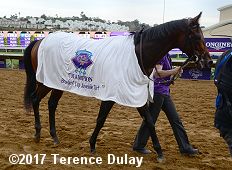 Left: Mendelssohn in the post parade. Winning jockey Ryan Moore said, "He's still learning but he got away well and travelled very kindly the whole race. He was able to ease his way out, and I felt he still had plenty to give. He still wasn't sure how to get down and gallop. He's a big, raw horse still and he'll improve with racing and experience."

Right: Mendelssohn heads back to the barn after the race. Co-owner Michael Tabor said, "In his short life, Scat Daddy was a great stallion and we've been on the lookout for the next one. Hopefully this fellow will do the trick." 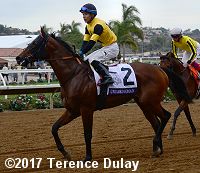 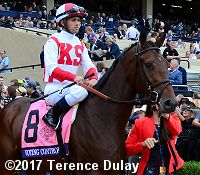 Left: Second place finisher Untamed Domain returns after the race. Trainer Graham Motion said, "He ran awesome. But, it's awfully tough to come in second in these races. It's better than seventh I guess. I'm happy to be second, but you only have one shot at these races. He didn't get sharp away from there, but he never has been. He had to come very wide, but he ran great."

Right: Third place finisher Voting Control returns after the race. Jockey Javier Castellano said, "I had a good trip. I followed (Mendelssohn) every step of the way. When I got through in the stretch it took him time to get some momentum. I don't think he's a mile horse. I think he's more of a 1 1/16, 1 1/8 type of horse."

The horses break from the gate for the Juvenile Turf. Jose Ortiz aboard Untamed Domain (post 2) said, "He's always kind of slow out of the gate and he was today again. I saw, on the inside going into the backside, lots of guys were checking. A lot of people were in trouble and clipping heels. Then I saw (Kent) Desormeaux sitting chilly on the outside (aboard 11-1 My Boy Jack). I knew we were going to be a little wide, but I'm glad I had a clear run to get second."