The first of 13 World Championship races this weekend at Del Mar was the $1 million Breeders' Cup Juvenile Fillies Turf (G1) featuring a field of 14 two-year-old fillies going 1 mile on the turf. Happily was sent off as the 5-2 favorite off her wins in the Moyglare Stud (G1) at Curragh and the Prix Jean-Luc Lagardere (G1) at Chantilly. In to challenge her included 3-1 second choice Rushing Fall, winner of the Jessamine (G3) at Keeneland, and 5-1 third choice September, winner of the Chesham Stakes at Royal Ascot but a close second in the Fillies Mile (G1) at Newmarket last out. 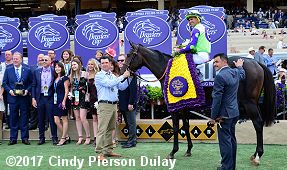 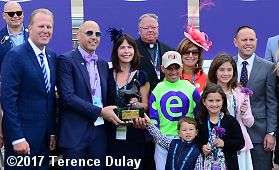 Left: Rushing Fall in the winner's circle. Winning jockey Javier Castellano said, "We had a little bit of a rough trip going into the first turn, but I was lucky to be able to save some ground in the first turn and then get to the outside. I had a perfect trip after that. "She's a very professional filly. I love the way she does things. She's a very special filly. She's 3-for-3 and has won on soft turf and firm turf."

Right: The trophy presentation for the Juvenile Fillies Turf with trainer Chad Brown on the far left. Brown said, |Javier rode a great race. The key was going out of that post and getting a spot in the first half of the field which he accomplished. From there, with a nice pace in front of us, he was comfortable where he was and he moved when he felt the time was right. She has a devastating move when you turn her loose." 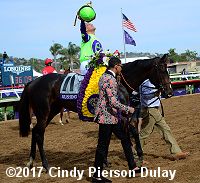 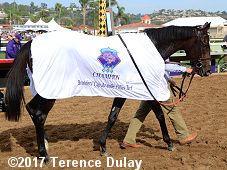 Right: Rushing Fall heads back to the barn after the race. Winning owner Bob Edwards said, "Wow, It's really impressive. She's a turf rocket. Chad was confident. When he saw her last winter, he said, 'I'll take her to the Breeders' Cup.'" 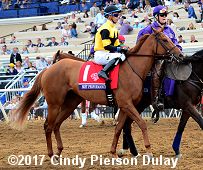 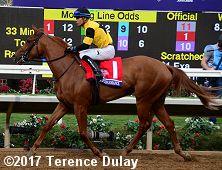 Left: Second place finisher Best Performance in the post parade. Jockey Jose Ortiz said, "She ran very well. Broke well. I was in a good position then was shuffled back a little on the second turn. But when I asked her to go she gave me a good turn of foot."

Right: Third place finisher September returns after the race. Trainer Aidan O'Brien said, "She missed the break but finished well. She had run a good race. I have two nice fillies for next year." Jockey Seamus Heffernan added, "All the Europeans seemed to miss the break. I did and that is the advantage the Americans have over the Europeans." 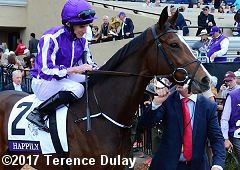 Left: Last place finisher and beaten favorite Happily heads out to the track before the race. Jockey Ryan Moore said, "She took too long to find a gear and by then it was too late and there was some horses in front of her."