Kicking off the Championship races on Saturday was the $2 million 14 Hands Winery Breeders' Cup Juvenile Fillies (G1), featuring the best 2-year-old fillies going 1 1/16 miles on the main track. Del Mar Debutante (G1) and Chandelier (G1) winner Moonshine Memories was the 5-2 favorite in the field of 13 over 7-2 Heavenly Love, winner of the Alcibiades (G1), and 5-1 Separationofpowers, winner of the Frizette (G1). 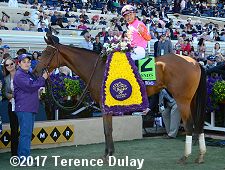 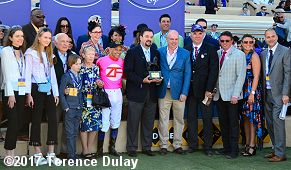 Left: Caledonia Road in the winner's circle. Winning jockey Mike Smith said, "She was dynamite. She was much more forwardly placed than I expected her to be, to be honest. She was up there intent on getting into the game and running good. She was in a good rhythm, breathing well. I gave her a breather from the half-mile pole to the three-and-a half because she kind of wanted one. When I stepped on the accelerator again, man, she jumped back on it and I knew I was going to be live from that point on."

Right: The trophy presentation for the Juvenile Fillies. Winning trainer Ralph Nicks said, "This filly has come into her own this fall and her timing was impeccable. This run down the stretch is kind of her style. This is my first win and it's on my third try. It's just amazing." 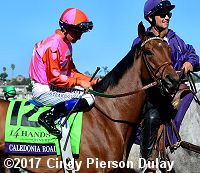 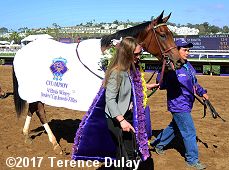 Left: Caledonia Road in the post parade. Nicks added, "Oddly enough this is the first horse that Mike has ridden for me. But when I was 16 and an apprentice jockey we rode together and have been good friends since then. So we have a lot of stories and back history as kids growing up."

Right: Caledonia Road heads back to the barn after the race. Co-owner Nick Sallusto said, "Total complete exhilaration. Everything that goes intgo this behind the scenes, and of course all the hopes and wants of my good clients, this means the world to us." 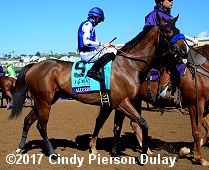 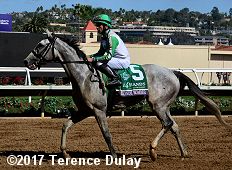 Left: Second place finisher Alluring Star in the post parade. Trainer Bob Baffert said, "She ran her heart out and I'm proud of her, but these second-place finishes are piling up and are tough. We try to win these things. But, all you can hope for is that your horse shows up and she ran well."

Right: Third place finisher Blonde Bomber returns after the race. Jocelyne Kenny, assistant to trainer Stanley Gold said, "She ran amazing and I am so, so pleased with her. It was such a hot pace up front and we really didn't want her that far back, but honestly, I have no complaints. She definitely got far back and had a lot of work to do and a lot of ground to make up but they went :22 and :46 on the front end and that's fast. It was her first time going two turns, and her first time with this kind of company. She's never run in graded stakes company. I haven't to talked to Stan yet back in Florida, but I am sure that he's thrilled." 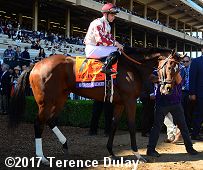 Left: Seventh place finisher and beaten favorite Moonshine Memories heads out to the track before the race. Trainer Simon Callaghan said, "She got pressure all the way around, Alluring Star wouldn't leave her alone, It's tough to have that kind of pressure. I'm disappointed, but I'm happy with her."

Right: The horses break from the gate for the Juvenile Fillies. Jockey Joe Talamo aboard Alluring Star (9) said, "We had a really good trip. I didn't think Flavien (Prat on Moonshine Memories) was going to go out there so fast, but my filly was comfortable tracking off her. Turning for home I really thought we were going to get there. This filly has a big future. It was only her third start and she tried hard."