The first of four championship turf races on Saturday was the $2 million Breeders' Cup Filly and Mare Turf (G1) with 14 older fillies and mares going 1 1/8 miles out of the infield chute of the firm Jimmy Durante turf course at Del Mar. Last year's runner-up Lady Eli was sent off as the 3-2 favorite off wins in the Diana (G1) and Ballston Spa (G2). In to challenge her included 11-2 second choice Rhododendron, winner of the Prix de l'Opera (G1) at Chantilly, and 11-1 third choice Wuheida, fourth in her last 2 starts, the Matron (G1) at Leopardstown and the Prix de l'Opera (G1). 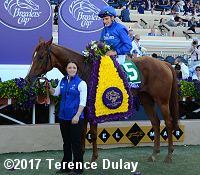 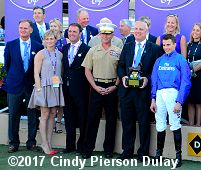 Left: Wuheida heads to the winner's circle. Winning jockey William Buick said, "She's a push-button ride. I could send her forward from the gate and get her into a nice rhythm, and the trip was never a concern. I was very happy throughout and I had plenty of horse and I could go where I wanted. It was a case of don't get too excited and don't go too soon."

Right: The trophy presentation for the Filly and Mare Turf. Winning trainer Charlie Appleby said, "I was delighted from the get-go. The fractions all looked right and William got everything spot on. I'd love to train her as a four-year-old. For me, she can only get better as she gets older and strengthens into her frame." 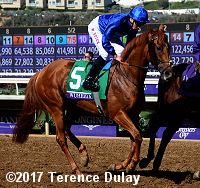 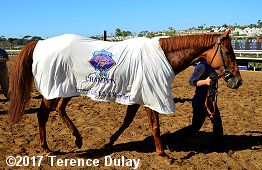 Left: Wuheida in the post parade. Joe Osborne of Godolphin Racing said, "She seems to be blooming since she got here. The sunshine and the weather suits her. She's a lovely filly, she's obviously been training well and looking well. So thankfully she ran accordingly."

Right: Wuheida heads back to the barn in her winner's blanket. 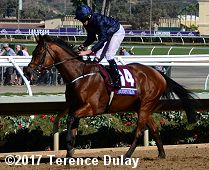 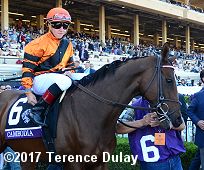 Second place finisher Rhododendron returns after the race. Jockey Ryan Moore said, "They didn't go quick enough. She rolled a bit in the straight, but she is very brave." Trainer Aidan O'Brien added, "It's always tougher from a wide draw, but she ran well and I'm delighted with her."

Right: Third place finisher Cambodia heads out to the track before the race. Trainer Jockey Drayden Van Dyke said, "I had a perfect trip. No excuses. She ran great." 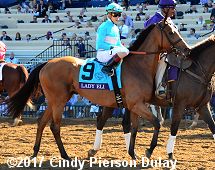 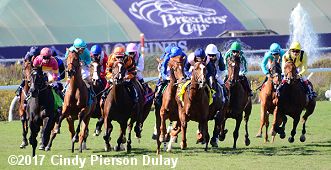 Left: Seventh place finisher and beaten favorite Lady Eli in the post parade. Jockey Irad Ortiz Jr. said, "Going into the first turn out of the chute she got a little bump and got rank. She was a little keen and I had to fight a little bit with her. After that I had a good trip. She didn't give me that same kick in the end." Trainer Chad Brown added, "Irad said he got bumped pretty hard on the first turn and he dropped in. Then he got a little cover and then it seemed like she got him from behind again but she did have some clear run. She had a rough trip and did have clear spots to run and she just didn't have it today. I don't know if all the bumping discouraged her or she just didn't have from some reason today. She's never done that before obviously. It's quite a surprise to me, it's unfortunate but that's horse racing."

Right: The fillies and mares make the turn out of the chute onto the main track shortly after the start.