The 2017 Breeders' Cup World Championships ended on Saturday with 9 races all with year-end championship implications. 37,692 fans packed Del Mar Thoroughbred Club just north of San Diego on a picture perfect day of sunny skies, minimal wind, and temperatures in the high 60's. Due to Del Mar's smaller capacity compared to other Breeders' Cup venues such as Santa Anita, ticket sales were capped at 37,500 each day. Post time for the Classic was delayed and the race didn't go off until 10 minutes to sunset, so it was quite dark.

The $6 million Breeders' Cup Classic (G1) features the best older horses going 1 1/4 miles on the main track. Defending champion and Dubai World Cup (G1) winner Arrogate was the 2-1 favorite in the field of 11 off his second place finish in the Pacific Classic (G1) over the same course. In to challenge him included 5-2 second choice Gun Runner, winner of the Stephen Foster (G1), Whitney (G1), and Woodward (G1), and 4-1 West Coast, winner of the Travers (G1) and Pennsylvania Derby (G1). 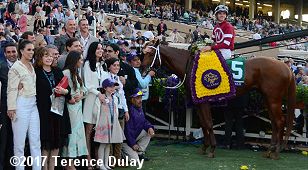 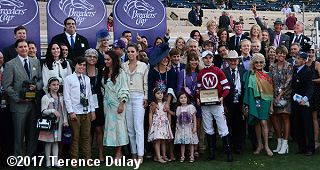 Left: Gun Runner in the winner's circle. Winning jockey Florent Geroux said, "This (win) means a lot. It's the biggest win of my career. It's the big race with Horse of the Year on the line. I'm glad he was the best horse. No, not really (surprised to be on the lead). I think he was the quickest horse in the race from the beginning of the race. Steve was the one who gave me the opportunity to ride this horse. We knew from the beginning he was the real deal. We were so confident going into the Kentucky Derby; we really thought it was his best chance ever to win it."

Right: The trophy celebration for the Classic. 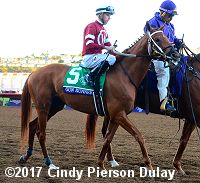 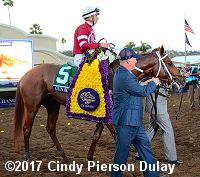 Left: Gun Runner in the post parade. Geroux added, "It wasn't like my horse was going crazy and would lose his chance. I really like (Collected) and I respect him a lot. He was the horse for the course for sure. He showed it today. He was just second best; my horse was the best horse today." 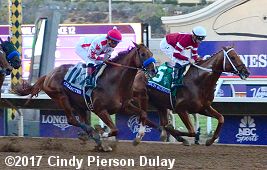 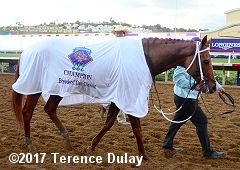 Left: Gun Runner and Collected on the lead first time by.

Right: Gun Runner heads back to the barn with his winner's blanket. Trainer Steve Asmussen said, "It's a good team and he's an incredible horse. Incredible horse. Everyone is part of the team and they did a phenomenal job. Scott (Blasi, assistant trainer), Angel (Garcia, exercise rider), Florent (Geroux, jockey), the owners... we did the right things at the right time and all that made it special. What an awesome feeling this is. Florent has the ultimate confidence in Gun Runner and he rode Gun Runner. It's all part of the process. We had discussed what we'd see (in the race) through the day and I told him to 'ride Gun Runner.' I'm the lucky trainer of the Horse of the Year." 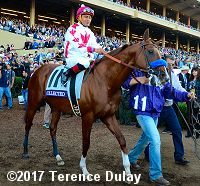 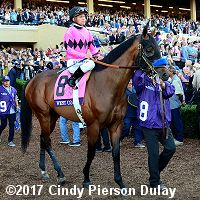 Left: Second place finisher Collected heads out to the track before the race. Jockey Martin Garcia said, "He ran great. I can't be sure, of course, but I think if our positions were switched – if I was inside (Gun Runner) and he was out – we might have had a different finish. I wanted to get to the rail and save ground, but I couldn't. I'm proud of him, though. He gave me what he had."

Right: Third place finisher West Coast heads out to the track before the race. Jockey Javier Castellano said, "I thought I was in good position on the far turn, but I just could not catch the top two. I have no complaints. He ran his heart out today." 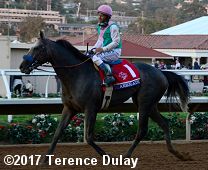 Fifth place finisher (in a dead heat with Gunnevera) and beaten favorite Arrogate returns after the race. Trainer Bob Baffert said, "He's like a pitcher who can't find the plate. I hate to make any excuses for the big horse (Arrogate), but he's just not the horse he was. He struggles over this track, but when I got him up to Santa Anita, I thought maybe. He broke flat-footed and broke in and he weaved in. He lost a lot of momentum there. He's just losing interest and I think that's what it is. He's run so many incredible races that I really think he's just losing interest. That's what it is. It's time (for him to retire). But he has done so much. What he accomplished in a short period of time, the Travers win (in track and stakes record time), beating California Chrome (in the 2016 Classic), winning the Pegasus and the way he won in Dubai. "

Shortly after the start of the Breeders' Cup Classic. Mike Smith aboard Arrogate (post 1) said, "He just doesn't like this track. For whatever reason, I hate to say it, he has shown it time and time again and showed it today. (His bad start) is what he's been doing every time he runs here. When he's on his A race, he's one of the fastest horses we have ever seen. He just won't run over here. I have tried to talk myself into thinking he would. He has just showed me time and time again that he wouldn't. That's just what he does over this racetrack. I don't know what it is. Every time I ride him here, he never seems to get underneath himself."