The $1 million Las Vegas Breeders' Cup Dirt Mile (G1) featured a field of 9 older horses going 1 mile around 2 turns of the main track. Dortmund was sent of as the 7-10 favorite off his 2nd place finish in the Awesome Again (G1) after finishing third in the Pacific Classic. In to challenge him included 4-1 Gun Runner, second in the Pennsylvania Derby (G2) after finishing a distant third in the Travers (G1(, and 7-1 Runhappy, last year's Sprint champion but 4th in the Ack Ack Handicap (G3) in October, his only start so far in 2016. 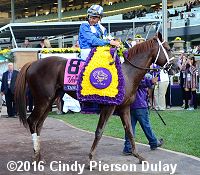 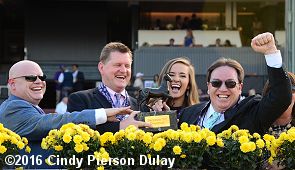 Left: Tamarkuz in the winner's circle. Joe DeSantis, racing manager for Shadwell Farm said, "He was bought at a yearling sale. It would be our farm manager, Greg Clarke, and Rick Nichols, our president, who is not here today.I'm sure this is going to make him feel better, but that's why he was not here today. But he was bought as a yearling and taken to Europe where he had a decent career, but when they put him on the dirt in Dubai is when we really figured out what he was about, and that's why Sheikh Hamdan sent him back to us."

Right: The trophy presentation for the Dirt Mile with trainer Kiaran McLaughlin on the far right. McLaughlin said, "We were lucky enough to get him at Saratoga. He liked the horse, finished second, and then he was at Belmont for Effinex, the next start, I believe that's who he rode. We were able to have him that day also, and then I just contacted his agent and he was happy to hold the call, so it was worked out great. He's a great rider." 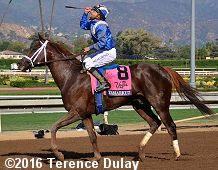 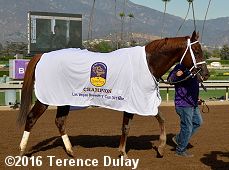 Left: Mike Smith celebrates as Tamarkuz returns after the race. Smith said, "I had really a good trip. It set up. There was a lot of pace. Tamarkuz has speed himself and right away they opened 2, 3, 4 (lengths), so I knew they were going fast. After that it was just a matter of getting him into a comfortable rhythm and a happy place. When I called on him, he finished like he's been finishing for me. I really thought he had a good shot today."

Right: Tamarkuz heads back to the barn wearing his new winner's blanket. 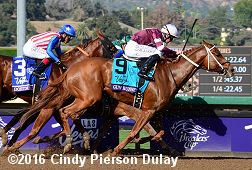 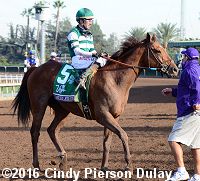 Left: Second place finisher Gun Runner crossing the finish showing how close it was for 2nd, 3rd, and 4th. Trainer Steve Asmussen said, "He's a tremendous physical specimen. (Assistant trainer) Scott (Blasi) and the whole team have done a great job keeping him where he's at. I think we got in a hurry with him today, but he put Dortmund away and tackled the fast horse early and paid the price for it, but we didn't come out here to give it away. We're dreamers in this game and we were working him last summer thinking we would maybe win the (Kentucky) Derby with him this year. He's just a tremendously talented horse."

Right: Third place finisher Accelerate in the post parade. Jcckey Tyler Baze said, “I wanted to be sitting kind of third, fourth on the outside, but I ended having a beautiful inside trip. It got a little tight down the lane, but I was able to get through there past Dortmund at the end. All this was new to him, getting dirt on his face. I was expecting him to run big and he did." 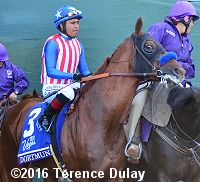 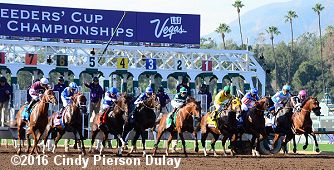 Left: Fourth place finisher and beaten favorite Dortmund heads out to the track before the race. Trainer Bob Baffert said, "We were hoping to go to the front and didn’t, but got into a good position. It was a pretty hot pace. He looked great down the backside. When I saw the fractions, I got a little worried. The track is demanding today. He just didn’t bring it like he has before."

Right: The horses break from the starting gate for the Breeders' Cup Dirt Mile.