Day two of the 28th Breeders' Cup World Championships took place Saturday at Churchill Downs before a crowd of 65,143 enjoying partly sunny and temperatures in the 60's. The main track was listed as good at the start of the card but upgraded to fast in time for the Sprint, while the turf remained good.

The $5 million Breeders' Cup Classic (G1) is the richest race in North America, featuring top older horses going 1 1/4 miles on the main track, in a race that often decides Champion Older Horse, Champion 3-Year-Old Male, and/or Horse of the Year. Jockey Club Gold Cup (G1) winner Flat Out was sent off as the 7-2 favorite in the field of 12 over 4-1 second choice Havre de Grace, the filly taking on males after winning the Woodward (G1) and Beldame (G1), and 5-1 third choice So You Think, trying dirt for the first time after a close second in the QIPCO Champion Stakes (G1) at Ascot. Uncle Mo, last year's Breeders' Cup Juvenile winner, was the 11-2 fourth choice off his Kelso (G3) win at Belmont Park. 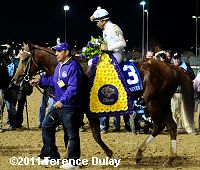 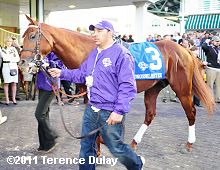 Left: Drosselmeyer parades with his flowers after winning the Classic. Winning trainer Bill Mott said, “He ran a super race. He was mowing them down the last eighth of a mile. I guess his biggest attribute is his stamina, and he showed it today. When they were wearing down, he was coming. It’s great. Maybe they’ll want to run him another year.”

Right: Drosselmeyer in the paddock. Mott added, "He's right up there with the Breeders' Cup Classic winners for sure. I think it's just a really big thing for any horse to win a Belmont and a Breeders' Cup Classic. Could I have told you that two years ago when we got started with him when he was a 2 year old?  No, I couldn't have done that.  But you keep working with him, and the horses keep improving.  If they stay sound and they're healthy, you know, they've got good pedigrees, a lot of times they climb that ladder, and he's reached the point where, hey, he's joined the best horses in the country." 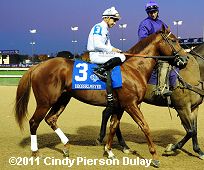 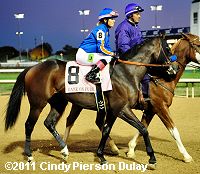 Left: Drosselmeyer in the post parade. Winning jockey Mike Smith said, “He ran an awesome race right from the first jump. Right out of the gate, he got into a great rhythm. The key to this horse is to keep him moving. If you put on the breaks it messes him up. I knew I was going to wheel out, so I just kept him going. And I was able to save ground on both turns.”

Right: Second place finisher Game On Dude in the post parade. His jockey Chantal Sutherland said, “He ran so hard. He ran great. He absolutely ran his race today. He was running well up front and Johnny (Velazquez on Uncle Mo) was pushing on us. He really gave us a run. But when he came to us, my horse dug in and tried harder than he ever has before. He really dug in. He ran every inch of the way and he was really tired at the end. I’ve never seen him that tired. I am so proud of him. He ran great.” 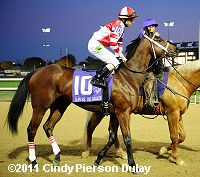 Left: Third place finisher Ruler on Ice walks over from the barn before the race. His trainer Kelly Breen said, “I think, he’s a top-class 3-year-old. I don’t know where this puts him with the others, but I have to say, after this race, because he was the only 3-year-old to hit the board, he’d certainly have to be under consideration (for Eclipse Award for Champion 3-Year-Old).”

Right: Fourth place finisher Havre de Grace in the post parade. Her trainer Larry Jones said, “We didn’t get the trip we wanted. The 11-horse (Headache) leaned on us pretty good from the start, but she ran well. Rick (Porter) likes to run where the gusto is. No regrets about running here. She didn’t do anything to tarnish herself. She has another year ahead of her.” 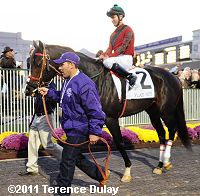 Fifth place finisher and beaten favorite Flat Out heads out of the paddock before the race. His trainer Scooter Dickey said, “No excuse, he just got outrun. That’s it.” Alex Solis (jockey, Flat Out, 5th) – “I had a good trip. He broke sharp. The winner came from behind me. I have no excuse.”

Right: The entire field as they go by the first time with Game On Dude out front and Drosselmeyer far back with only three horses beaten at this point.