The 1 1/2 mile $2 million John Deere Breeders' Cup Turf traditionally features the best turf route horses from both sides of the Atlantic, and this year was no exception. Azamour was sent off as the lukewarm 7-2 favorite in the field of thirteen over 4-1 second choice Shakespeare, winner of the Joe Hirsch Turf Classic over the same course. Defending champion Better Talk Now was back as a 9-1 outsider, with trainer Graham Motion sending out 81-1 longshot Shake The Bank as a rabbit to ensure an honest pace.

However, nobody took the bait. Jockey Tommy Turner urged Shake the Bank along right away and he got as much as 7 lengths clear through brisk early fractions of 23.95, 47.89, and 1:13.20 over the "good" Widener turf course. Turning for home, 9-1 shot Shirocco, who had run his own race in second well off the rabbit pacesetter, closed the gap as Shake the Bank tired out and gained the lead at the top of the stretch through 10 furlongs in a slow 2:05.05. Down the stretch, 16-1 shot Ace, making a late bid from as far back as ninth early under Kieren Fallon, got within half a length of the leader but jockey Christophe Soumillon asked Shirocco for more run and got it, as he edged away to prevail by 1 3/4 lengths. The jubilant Soumillion stood up in the irons blowing kisses at the crowd over the last 100 yards and past the finish as he completed the 1 1/2 miles in a time of 2:29.30. It was just a neck back from Ace to favored Azamour in third and 3/4 length more to 9-2 shot Bago in fourth, completing a top-four sweep for the Europeans. Better Talk Now finished seventh and top American hope Shakespeare failed to fire and was 12th. 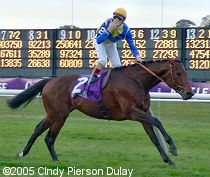 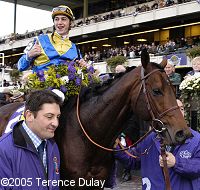 Shirocco takes his walk down Victory Lane to the winner's circle. Winning jockey Christophe Soumillon said, "This is just a dream. I always dream of winning races like the Arc de Triomphe and the Breeders' Cup and to ride for a trainer Andre Fabre makes it special. To win in New York is unbelievable." 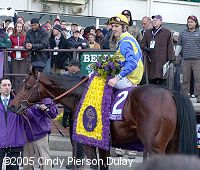 Shirocco and jockey Christophe Soumillon wait for the rest of the connections to arrive in the winner's circle. Winning trainer Andre Fabre said, "He acts on any ground, and he's a horse that has a lot of stamina. So he needs to be ridden like that, close to the pace. He took advantage of his good draw to make the running (behind Better Talk Now's 'rabbit' Shake the Bank). I was very confident when I saw him at the front. He stays in training next year." 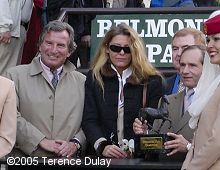 Owner Baron Georg von Ullmann on the left at the trophy presentation. Shirocco is supposed to stay in training and race at five, aiming for all the big international events. 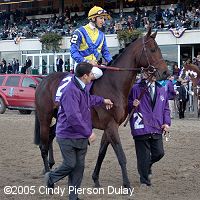 Shirocco in the post parade. Jockey Christophe Soumillon said, "He likes soft ground and a good pace to run at and with the pacemaker in there, we got both today. When I got to the turn, I just wanted to let him go and not try to pull him back to mix up his action. We got two (lengths) in front and when he saw the wire, he just flew home." 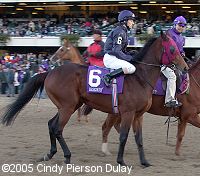 Second place finisher Ace in the post parade. His jockey Kieren Fallon said, "I had the run I wanted. I was able to save ground on the backstretch. But he's a top of the ground horse, and this deep track today was not to his advantage. The blinkers were a great help; he should have been wearing them all along. It allowed him to concentrate and he ran much better for them." 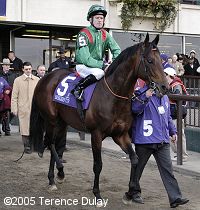 Third place finisher and beaten favorite Azamour comes out of the tunnel from the paddock. His trainer John Oxx said, "(Jockey) Mick Kinane reported that he lost his place 3 1/2 furlongs out at the bottom of the backstretch and if not for that, he would have won. It cost him valuable momentum and though he stayed on in the straight the winner had flown. The ground did not help as he can not bounce off the soft turf like he does on the firm. He lacked his customary zip, but he is a tough horse who never lets you down and he ran his heart out. That's his last race and I will miss him. I have trained some top horses like Sinndar and Alamshar and this fellow ranks up there with him."