The $1 million Alberto VO5 Breeders' Cup Juvenile Fillies kicked off the World Thoroughbred Championships stakes action on Saturday, with 10 two-year-old fillies going to the gate in this Grade 1 trip around 1 1/16 miles at Belmont Park. Folklore was the lukewarm 2-1 favorite, with Adieu the 4-1 second choice and Original Spin the third choice at 9-2.

Canadian hope and 9-1 shot Knights Templar and jockey Gary Stevens took the early lead down on the rail through a quarter in 22.65, a half in 45.34, and 3/4 in 1:10.39 while Folklore stalked her to her outside the whole way. At the midpoint of the turn, Knights Templar succumbed to the fast pace and dropped back, allowing Folklore an uncontested 3-length advantage by the 1/8 pole. 7-1 shot Wild Fit put in a late bid after racing near the back of the pack early, but after a traffic-plagued trip while rallying on the turn, was left with too much to do as Folklore finished 1 1/4 lengths clear in a time of 1:43.85 over the fast track. It was a long 4 3/4 lengths back from Wild Fit to Original Spin in third, while early pacesetter Knights Templar faded to sixth. The win was jockey Edgar Prado's first in the Breeders' Cup, and he would add a second win later in the card in the Sprint. 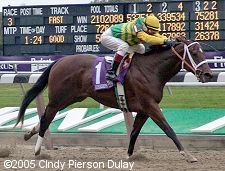 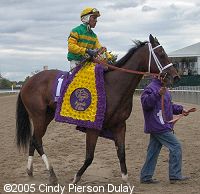 Folklore with her Breeders' Cup flowers. Winning jockey Edgar Prado said, "She broke running out of the gate very fast. She did it all by herself, very sharp. She took a little breather at the half-mile pole and I was very comfortable with everything. I'm very happy with the way she was doing it." 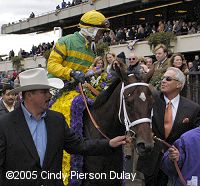 Folklore takes her walk down Victory Lane with trainer D. Wayne Lukas to her right. Lukas said, "When you win one on this day, they become special ones and they get a special place in the barn. We've been blessed with some good ones and we've also been blessed with people that support us. (Owners) Bob & Beverly Lewis have been so great to us. I'm very proud to hear that this was Edgar Prado's first win. He's a great rider. This is the first of what's going to be a lot of wins for him but I'm just tickled to help him get his first. We're not going to do anything rash with Folklore right now. We've got a leg up on the game at this point." 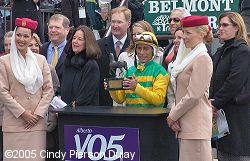 The trophy presentation in the winner's circle. Jockey Edgar Prado said about his first Breeders' Cup win, "It means a lot. I give thanks to my family and friends in Maryland and New York. Thanks to them, I am what I am. It feels super. It took me a long time but I finally got it done." 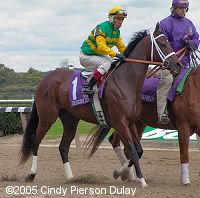 Folklore in the post parade. Her owners, Bob and Beverly Lewis, were unable to attend due to health reasons. Trainer D. Wayne Lukas talked to him on the phone after the race and said, "He was elated. I'm trying to tell him how happy I am for him, he's trying to tell me how happy he is for me. They're so appreciative." 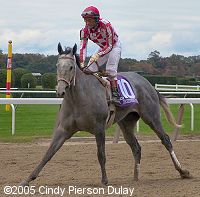 Second place finisher Wild Fit returns after finishing second. Her jockey Alex Solis said, "I was comfortable with where we were (far back early). We wanted to get her to relax, and she seemed to get that way by coming away and set her own pace. When we came on the turn, I had a little bit of traffic trouble, and it slowed us down some. But she came running, and for a minute there, I thought I was going to catch the winner. She ran great and I'm very pleased with her effort." Trainer Jeff Mullins added, "She ran awesome. She got steadied a little at the 5/16 pole. If she hadn't steadied, she might have got there. They were going fast on the lead. We probably would liked to have had her closer, but that's horse racing." 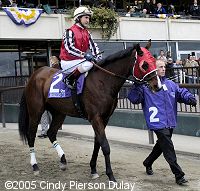 Third place finisher Original Spin comes out of the tunnel from the paddock for the post parade. Her jockey Jerry Bailey said, "I was where I wanted to be, and she was taking me through the pack. I moved up on the winner. I thought she hung in there well to be third; It was a long fight for it. The winner had a lot of horse at all times." Trainer Tony Mitchell added, "She ran her race. I'm delighted. It was pretty awesome. She dug in and really tried. To run third in a Grade 1, what's wrong with that?"