The $1.5 million Breeders' Cup Juvenile, a Grade 1 event at 1 1/16 miles on the main track, is often called a preview of next year's Triple Crown, despite the fact that no Juvenile winner has ever won the Kentucky Derby and the winner often doesn't make the gate on the first Saturday in May. In this year's edition, First Samurai was sent off as the 6-5 favorite in a full field of fourteen, with Stevie Wonderboy the 9-2 second choice and Sorcerer's Stone the third choice at almost 8-1.

33-1 outside Dawn of War made the running early, getting the quarter in 23.14 and the half in 45.75 down the long backstretch, with 9-1 fourth choice Henny Hughes stalking him to his outside. Rounding the turn, Henny Hughes took over the lead as Dawn of War dropped out, and he held the lead to the 1/8 pole through 3/4 in 1:10.61. Late in the stretch, Stevie Wonderboy, who was unhurried in 12th early but gained ground on the turn, closed strongly on the outside to collar Henny Hughes late and drew away to win by 1 1/4 lengths in a time of 1:41.64. It was 2 more lengths back to First Samurai in third. 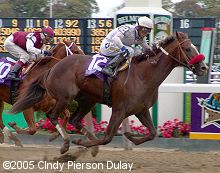 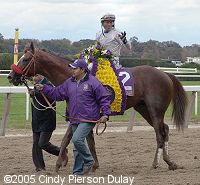 Stevie Wonderboy with his Breeders' Cup flowers. Winning jockey Garrett Gomez said, "When I hit the wire, I never had a feeling like it and it was, you know, I couldn't believe I actually won by first Breeders' cup race. I was so thrilled and when I talked to Donna Barton after the race, she said, what's it fell like? I said, I feel like I need to cry. It means that much." 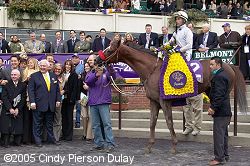 Stevie Wonderboy in the winner's circle with retired jockey Chris McCarron and owner Merv Griffin on the far left. Winning trainer Doug O'Neill said, "Garrett (Gomez) mentioned he had a little trouble down the backstretch but once he got in the clear, thank God for the long stretch and he got up. The final time was fast. I am glad I kept training him for one turn after the Del Mar Futurity and skipped the Norfolk (at Santa Anita). Two turns is such a different style of running and I'm glad I shipped early (Oct. 18)." 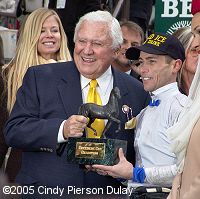 Owner Merv Griffin and jockey Garret Gomez with the trophy. Griffin said, "This is extraordinary. I mean, stand in that winner's circle and be able to shout my own name was a thrill. Doug's done a fabulous job with that horse. That horse, to me, is awesome." 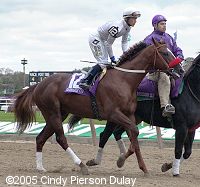 Stevie Wonderboy in the post parade. Jockey Garrett Gomez said, "I had a decent trip early on, but a horse down on the inside swung out at the 5/8 pole, and I clipped heels with him. I took back a little and dropped to the inside, and from the half-mile pole on I was waiting to push the button. When I did, (Henny Hughes and First Samurai) gave me more of a fight than I expected. My horse has a heck of a turn of foot, but I had trouble getting to them for a minute. When he found his best stride at the sixteenth pole, he wore them down and ran a huge race. I hope he's my Derby horse. He has a great mind and is very mature. This is a huge win for me." 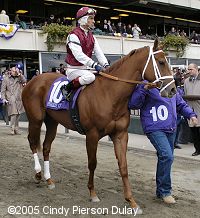 Second place finisher Henny Hughes comes out of the tunnel from the paddock for the post parade. His jockey Edgar Prado said, "I thought he would hang on. He gave me another gear when I asked him. I don't know where that other horse came from. I am very proud of him; he ran a great race." Trainer Kiaran McLaughlin added, "I am happy but disappointed. He ran great and just missed. Everything went well. I'll talk to the Darley people (owners) and see what we do next." 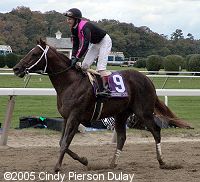 Third place finisher and beaten favorite First Samurai returns after his first career defeat. His jockey Jerry Bailey said, "He got a little nasty in the gate, but he had a decent trip. He took dirt in his face. He had a good run to the 1/8 pole, but he flattened out. It was a good trip. I'm disappointed, but not upset. Anytime a horse gives you everything he has, you can't be upset, just disappointed." Trainer Frank Brothers added, "I thought he ran well. I was still very happy with my horse. He's still eligible to win the Kentucky Derby. He ran against 12 different horses who all had stressful preps but it's the best of the best. I'm still very happy. This race was a little different. He was back a little and took the sand. He's taken everything in stride this year and this doesn't take anything away from him."