The $1 million Emirates Airline Breeders' Cup Filly and Mare Turf featured older fillies and mares from America and Europe competing in a Grade 1 event at 1 1/4 miles over the inner turf course at Belmont Park. Defending champion Ouija Board, who had a jockey switch this year to Belmont-based Hall of Famer Jerry Bailey, was sent off as the lukewarm 2-1 favorite over 5-1 second choices Megahertz and Wonder Again and 9-1 fourth choice Film Maker.

When the gate opened, as expected jockey Rafael Bejarano took 15-1 shot Intercontinental to a comfortable early lead and the Bobby Frankel trainee set easy fractions of 24.10, 48.92, and 1:13.62 over the "good" course. Bailey kept Ouija Board in mid-pack out wide and away from traffic for the backstretch trip. Turning for home, Bailey asked the defending champion for her run, and going five wide she got up to second position. However, aided by the slow early pace, Intercontinental still had plenty left in the tank, gaining a 3 length advantage at the top of the stretch through a mile in 1:38.17 and easily held off Ouija Board to win by 1 1/4 lengths in a time of 2:02.34. It was just a neck back to Film Maker in third, and 4 more back to Wonder Again in fourth. 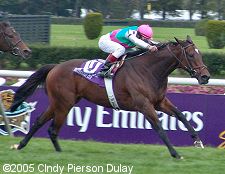 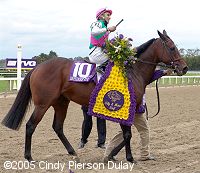 Intercontinental with her Breeders' Cup flowers. Winning jockey Rafael Bejarano said, "I feel really, really happy. I want to thank everyone for this great opportunity. The horse broke good, but she wasn't going as fast as she has. I tried to take hold and stay comfortable. At the quarter pole, I could feel the other horses coming, but I knew she could hold on." 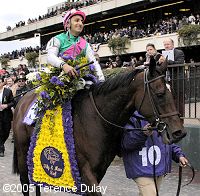 Intercontinental takes her walk down Victory Lane to the winner's circle. Winning trainer Bobby Frankel said, "In her race in the Winstar (Galaxy), so broke and relaxed so good, I was very excited about her race. Listening to Jerry (regular rider Bailey, who switched to Ouija Board) after that race, I figured she could go on in distance. (Bejarano) rode her perfect. I gave him instructions; I don't know whether he understood me but he rode her just the way I wanted him to." 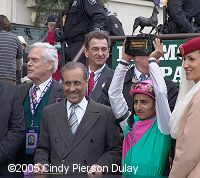 The trophy presentation in the winner's circle with Juddmonte racing manager Dr. John Chandler, owner Prince Khalid Abdullah, and jockey Rafel Bejarano. When asked how Prince Abdullah, who is very shy of the limelight, felt about the race, Dr. Chandler said, "He was obviously extremely delighted. This is one of his favorite families and fillies and he was absolutely delighted. As you said, he doesn't like to talk much to the press and likes to keep a low profile, but I have seldom seen him happier than he was today." 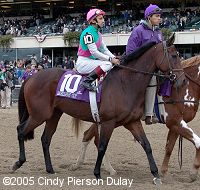 Intercontinental in the post parade. Her full sister, Banks Hill, won the Filly and Mare Turf in 2001 at Belmont and was second in 2002. She also is a full sibling to stakes winners Dansili, third in the Breeders' Cup Mile in 2000, and Heat Haze, winner of the Beverly D. and other major stakes. 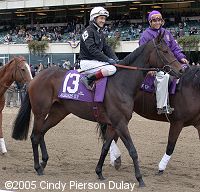 Second place finisher and beaten favorite Ouija Board in the post parade. Her jockey Jerry Bailey said, "My filly ran well. I got a good run early and was only three wide and that was exactly where I wanted to be. She made a nice run at the filly on the lead I thought (Intercontinental) would stop a little bit but she did not." Trainer Ed Dunlop added, "She ran a great race and I'm very proud of her. The winner had more speed than us and our filly probably runs 1 1/2 miles now. She ran a phenomenal race considering that she was nearly retired in the middle of the season." 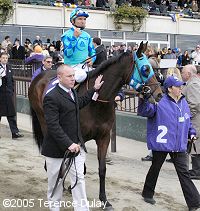 Third place finisher Film Maker comes out of the tunnel from the paddock for the post parade. Her jockey Patrick Valenzuela said, "Going by the stands the first time, (Frankie) Dettori's horse (Sundrop) came over on me and I clipped heels, Luckily, she didn't stumble more than she did. Because of that, I wasn't as close as I wanted to be. She was shuffled back on the turn (first), but once I got her clear, she made a good run into the far turn, and she ran a great race. She's going to get one of these some day."