The $2 million Emirates Airline Breeders' Cup Distaff was expected to be a repeat performance for defending champion Ashado, who won the Beldame over the same track earlier this month and was sent off as the lukewarm 2-1 favorite in the field of 13. Also in the field were Stellar Jayne and Happy Ticket, both sent off at 9-2 in this Grade 1 event at 1 1/8 miles around one turn at Belmont.

57-1 outsider Capeside Lady sprinted clear exiting the chute and set early fractions of 23.33, 46.31, and 1:10.74 while Stellar Jayne and 64-1 outsider Yolanda B Too gave chase. John Velazquez kept the favored Ashado in the middle of the pack heading into the turn. On the turn, Velazquez asked Ashado for her run and she split horses, bumping Society Selection at the 3/16 pole. However, 31-1 longshot Pleasant Home, who had trailed the entire field down the backstretch, was just getting into gear. Jockey Cornelio Velasquez took her out to the 4 path around the turn, then took command in mid-stretch and drew away to an impressing 9 1/4 length victory over Society Selection in a time of 1:48.34. It was just a neck back to favorite Ashado in third, and 2 1/4 lengths more to Stellar Jayne in fourth. 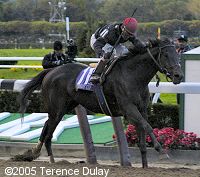 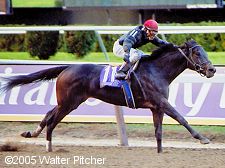 Pleasant Home starts to draw away in the stretch. Winning rider Cornelio Velasquez said, "The last time (Spinster Stakes) we had a problem because of a soft pace and we couldn't get there time. This time was better because of a fast pace. It gave us something to run at. We broke good and I just followed (Edgar) Prado (aboard Society Selection) and (John) Velazquez. When I entered the turn, I knew had so much horse, I knew I was going to win." 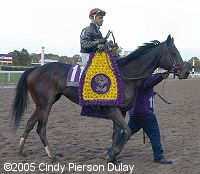 Pleasant Home with her Breeders' Cup flowers. Her owner Ogden Mills Phipps said, "I'm not a bettor, and I was surprised at the odds today. I thought they might be 12 or 15 to one, something like that, but not at all. I learned a long time ago from Shug that when you have a horse that is on the up, going up, doing well, looking as well as she did, that's the time to race them." 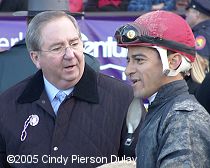 Trainer Shug McGaughey and jockey Cornelio Velasquez discuss the race in the winner's circle. McGaughey said, "I was surprised. I mean I know she was 20-1 shot, but I thought we would see a little betting on her. Closers have been doing OK today but even when I looked up in the paddock and I saw her price was 23-1, and it wasn't coming down, it was a real surprise. I don't bet so it's not a big deal to me, but I certainly didn't expect this. "She has really come around late. She had done so well in her last couple, I expected her to run well but I wasn't expecting this." 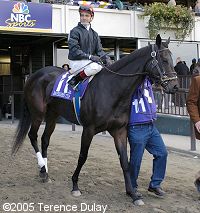 Pleasant Home leaves the tunnel from the paddock for the post parade. This race is likely to be her last start and she will join the excellent band of Phipps brood mares. 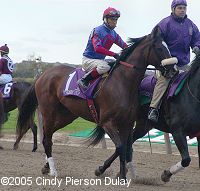 Second place finisher Society Selection in the post parade. Her jockey Edgar Prado said, "She ran good. There was a narrow hole and she went through. She tried real hard, but the winner was much better." Fernando Abreu, assistant to trainer Allen Jerkens added, "She ran a big race. She got into a little trouble coming off the turn. Ashado didn't want to let her out but she bulled her way through. The Breeders' Cup is always tough. She ran huge; second in the Breeders' Cup is not bad." 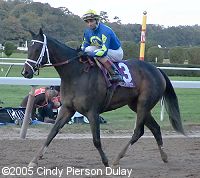 Third place finisher and beaten favorite Ashado returns after the race. Her trainer Todd Pletcher said, "Turning for home, I thought we had a chance but it's a long way from the quarter-pole to the finish line in a Breeders' Cup race. This is bittersweet (for Ashado). I would have liked to send her out with a win but you could never be disappointed with the career that this filly has had. It's been a tremendous run these last three years. As good as she was every time, finishing first, second and third in with three Breeders' Cup races, we won't get another one like this for a while. She's been as good as any filly has been, while we are disappointed she didn't get a win, we are not going to hang our heads."